One needs to reflect upon US history and its troubling legacy of â€œplacemakingâ€ manifested in acts of displacement, removal, and containment. This history is long and horribleâ€¦how is Creative Placemaking different or complicit with these actions?

As of writing this blog, I have a further two weeks until I complete my residency and return to Dundee. Over the past two years I have spent more time away from, than in Dundee, to the point that I arrived at SFAI increasingly aware that Dundee doesnâ€™t feel like home, and for that matter there isnâ€™t anywhere that feels like home. This unsettled feeling has somewhat preoccupied my residency, trying to overcome it by getting to know Santa Fe on foot and New Mexico through a broad scope of historic and current socio-economic and environmental research â€“ creating a temporary, or maybe an internalised and necessary illusion, of being in-place for myself.

Trying to understand this somewhat unintentional bodily-working-through of my own psychological processes often acts as a stimuli to my practice which in turn gives body to my hypothesis for performative practice as a form of public art that can hold active criticality. In the instance of trying to locate a sense of being in-place in Santa Fe, due to my lack belonging elsewhere, I have come to realise that there is a swinging movement between the original intention for my residency â€“ researching the misuse of law, with a particular focus on the laws that regulate water rights in New Mexico, and the potential space that can be create through the misunderstanding of a non-specialist â€“ and the implications and hence role of public arts policy. 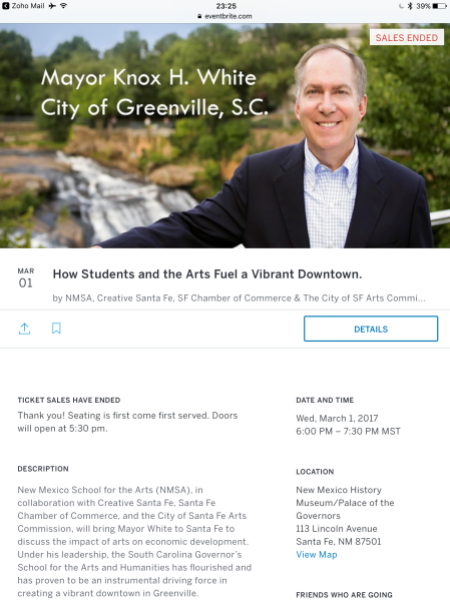 A key underpinning to my research so far is the understanding that Water Rights[1] are inherently linked to Property Rights[2]. Both of which imply the legal possession of use of a resource. And it is this mind-set of possession-of-use that is central to the current situation in New Mexico.

An inescapable example of this possession-of-use mind-set can be traced through the on-going treatment of Native American communities. Many settlers considered the Native way of life and collective use of land to be communistic and barbaric, with settler ideals stemming from the view that individual ownership of private property was an essential part of civilization. In an attempt to force these ideals upon Native populations, Congress passed the General Allotment Act in 1887, which authorized the president to survey Indian tribal land and divide the area into allotments for individual Indians and families. Members of the selected tribe or reservation were either given permission to select pieces of landâ€”usually around forty to one hundred and sixty acres in size â€“ for themselves and their children, or the tracts were assigned by the agency superintendent. If the amount of reservation land exceeded the amount needed for allotment, or if the allotment was not used in the westernised sense, the federal government could negotiate to purchase the land from the tribes and sell it to non-Indian settlers. As a result, sixty million acres were either ceded outright or sold to the government for non-Indian homesteaders and corporations as â€˜surplus landsâ€™. (See the History of Allotment on the Indian Land Tenure Foundation page for further detail.)

What can be drawn from this act is a significant relationship between the ideals of individualism, private property and a prioritising of use values.

For the Navajo Nation, the General Allotment Act resulted in their eastern border in Western New Mexico resembling a checkerboard. However, in spite of these attempts to colonise many Native tribes, including those of Navajo Nation, did not adopt the enforced ideals towards the environment as resources to be put to use. I was fortunate to meet with community members of Red Water Pond Road of Coyote Canyon Chapter, Navajo Nation this week, whose relationship to the land and waters is still predominantly held within their ancestral sense of belonging and being part of the land. So much so that they have continued to live at Red Water Pond Road despite its contamination in 1979, when United Nuclear Corporationâ€™sÂ Church RockÂ uranium millÂ tailingsÂ disposal pond breached its dam, releasing over a thousand tons of solidÂ radioactive mill wasteÂ and ninety-three million gallons of acidic, radioactive tailings solution, which then flowed through Red Water Pond Roadâ€™s surrounding landscape. After minor clean-up with shovels, United Nuclear Corporationâ€™s uranium mill continued to operate until 1982, after which the site was abandoned by the corporation leaving behind the infrastructure, by-products and contaminated landscape that were no longer of use to them. Whilst, the Red Water Pond Road residents, many of whom worked the uranium mines, continue to reside here despite the lack of employment and income they had become accustomed to or the ability to return to previous vocations such as shepherding due to the extent of radioactive contamination. It is now a place where net wire fencing, typically used for dividing farm land, acts as a visual divide between residents and their neighbouring pilings.

There is a comparison that can be drawn here between the legal possession-to-use and its accompanying mind-set, that fosters a lack of long-term responsibility to that which is made use of whether it be a landscape or grouping of people, and the Navajo ancestral sense of belonging and being part of this landscape which manifests as a commitment towards a continuing to live here. For me, these comparative relations to the same area of land stir up a question â€“ can a westernised (and patriarchal) ideal, and consequently entitlement, towards possession-to-use ever result in a mode of living that is ecologically sensitive?

It is in this question that I currently tread water, continuing to seek understanding through this arid landscape. I know there is a link to be formed between a critique of and beyond property and water rights as legal possessions-to-use (and the mind-set that supersedes this); a reflection on my own performative researching practice towards establishing a temporary sense of place in Santa Fe; and a role for public arts policy.

An initial reaction to this may be to look towards Creative Placemaking, a term co-opted by planning development that makes use of artistic methods and/or forms to drive an agenda for change, growth and transformation (or put succinctly, gentrification). Such developments frame their intentions as revitalisation in the interest of identified communities. By revitalisation they mean attaining the forms in which 21st Century ideals of successful civilisation are attributed. Similarities can be drawn between this and the intentions behind the General Allotment Act to â€˜organiseâ€™ (for which one can read colonise) Native Communities. In addition, acts of Creative Placemaking are typically achieved via the use and extraction of an areaâ€™s resources in such a way that the original communityâ€™s ability to continue to reside is often reduced. For Red Water Pond Road community it is due to radioactive contamination. For communities subjected to Creative Placemaking it is due to real estate speculation. In many ways, this form of Creative Placemaking is an expansion of the entitlement towards possession to use â€“ who makes the most successful use these identified areas? The current residents, or the affluent residents who replace them?

It is for the above reasons that as an artist I believe there is a need to be insistent that the aesthetics of criticality is at the core of Public Arts Policy.

[1] The right to make use of the water from a stream, lake, or irrigation canal.
[2]Â Property rightsÂ are socially-enforced constructs for determining how a resource or economic good is used.

Bedoya, Roberto. 2013. â€˜Placemaking and the Politics of Belonging and Dis-belongingâ€™Â Grantmakers In The Arts Reader, Vol 24, No 1 (Winter 2013)Â http://www.giarts.org/article/placemaking-and-politics-belonging-and-dis-belonging

It has been established byÂ Chris Fremantle, producer and research associate withÂ On The Edge Research,Â Grayâ€™s School of Art, The Robert Gordon University. Fremantle is a member of a number of international networks of artists, curators and others focused on art and ecology.