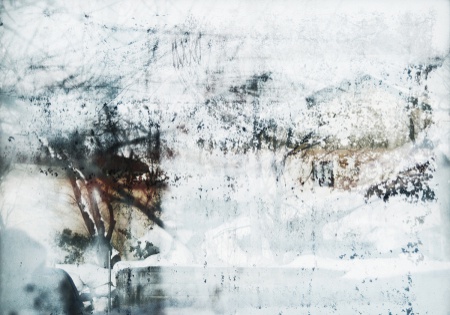 This post comes to you from EcoArtScotland
I am sorry for the delay in sending this Blog. We have had an exhibition of the work we have made during the residency, and with lots of entertaining besides, time has just evaporated. Yesterday I gave a talk as part of a series at the exhibition. 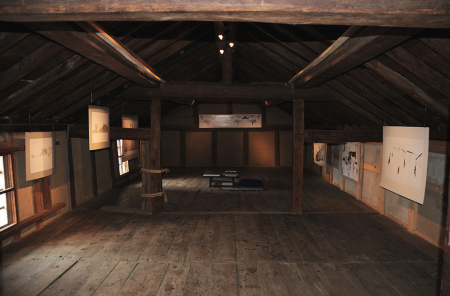 I was asked to talk about Scotland and decided to tell the story of the evacuation of the Scottish Islands of St Kilda in 1928. This involved a lot of internet research to get good information, images and video. My feeling is that there are many similarities with the forced evacuations here in Fukushima as a result of the tsunami disaster 3/11. During the research my feelings were re-enforced many times. While the St Kildans chose to evacuate, the reasons were largely outside their control. The encroaching modern world and their awareness of their own precarious and simplistic life eroded their centuries-old community structure. The slow migration of younger people to Canada and America had started the decline.

The subsequent handling of the financial and personal aspects of their re-homing was as complex, inefficient and time consuming, just as the process we are seeing here in Fukushima has been. And one can imagine that the success of the move for the St Kildans was as dependent on personal attitudes towards making a fresh start, as it is here with the Tohukans.

The question my talk posed was basically … is it possible to go back and re create a shattered community? Will it be forever changed? Is a fresh start needed wherever refugees settle? Where is home? Does it lie in the past, or the future, or is it now? 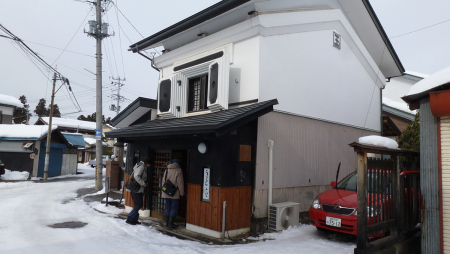 Our exhibition has been short but successful in that we have attracted many local people to come and join us. Some of us have always been on hand to welcome and chat to visitors, even if it was only to smile and use sign language. Part of the brief of this project was to help re-establish a cultural life in this area internationally blighted by the nuclear disaster which happened in an area hundreds of miles away but carrying the same Prefecture name.

The two Norwegian artists and I seem to be the only westerners in town and as we were on TV together with our lead Japanese artist Yoshiko Maruyama early on we seem to be known wherever we go. The fact that we are holding the exhibition in the most historically important Kura has also attracted people who rarely get a chance to see inside this privately owned building. It is preserved but un-restored with no glass in doors or windows and only limited electricity, so a chilly place in sub zero temperatures. It is the largest Kura in town, being three separate Kura buildings linked together. A Kura is a traditional rice storage barn and, with the town being in the centre of a very large and fertile rice growing area, there are huge numbers. The Mayor told us there are estimated to be 20,000 Kuras in and near the city. There was a saying that every man born in Kitakata should build his own Kura, and with a current population of 40,000 the numbers still stack up. 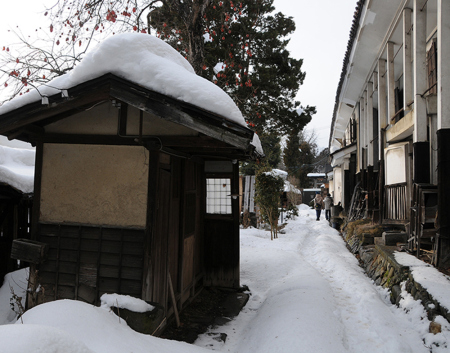 The massively thick doors and windows were a feature designed to protect against fire. Clearly with so much flammable material inside if one Kura went up in flames those adjacent would soon stoke the furnace and the whole city could be ablaze. But with solid doors and windows quickly closed the fire could be contained. 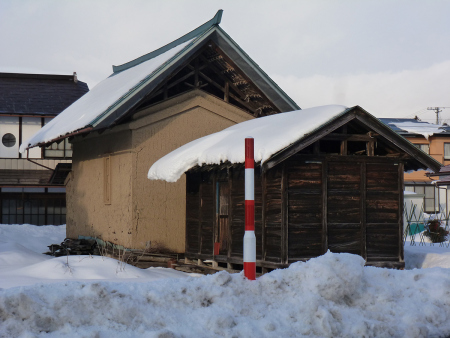 The walls are made of rice straw and mud with heavy wooden beam structures. The roofs are today usually covered with shiny ceramic wave shaped tiles which allow the water and snow to run off, in particular snow doesn’t build up. Before that they were thatched with thick rice straw. The style is consistent and they have raised roofs with air space to allow good ventilation. I learned from artist Aeneas Wilder that even today in rural areas rats and the snakes they attract – the snakes eat the baby rats – are still a problem. Today the Kuras continue variously as conversions into housing, shops, offices, fire stations, and cafes. Some of course are in terminal decline and others just surviving. Bringing our art into this culture has been a unique experience. 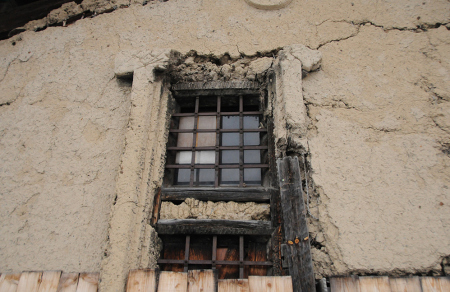 For my part having to decide early on in the residency what form my work would take, and with a requirement to connect with local issues, I decided to take an in-depth look at the snow that deeply covers this area. While snow of this depth was a great surprise to me I soon discovered that all of the local people and the refugees housed here really hated snow. They actually used that word ‘hate’ which is very strong in the Japanese culture who rarely show their feeling, especially negative ones, so easily. Could I make images that might show this element in a different light? Avoiding the obvious ‘ touristic’ beautiful shrines in snow – although I couldn’t resist putting a few of those on Facebook – I looked firstly at the power of snow to remove landscape. All the human details of habitation, agriculture and communication and the cultivated land itself are simply removed from the landscape. 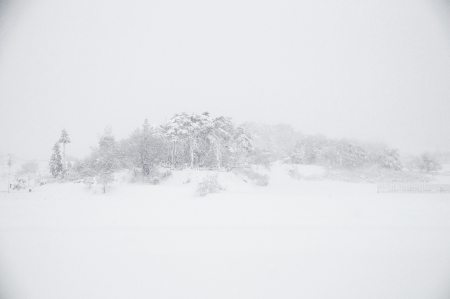 What still shows are the clues or residues of our occupation and this concept fuelled my initial images made in the foothills of the mountains near the village in which we were staying. Then spending more time in town I was interested in the effects of snow on the light and the way that in turn affected window reflections. The Japanese have a habit of blocking out light – or maybe just prying eyes – with thin patterned curtains, adhesive patterned plastic sheets, cut glass, or with paint which often carries the scratches of wear and tear causing an interesting effect. The reflection of the snow and snow covered building in these semi-clear windows created many unusual layered views of these locations. 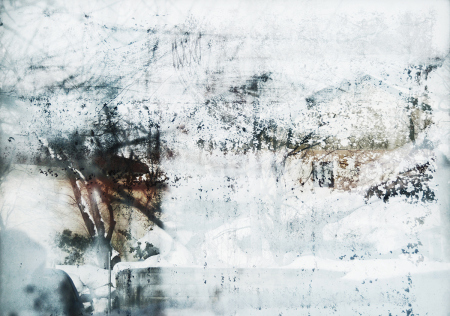 I also began looking at the concepts of Japanese Sumi-e painting. The ancient concepts of essence of place in which information was omitted and selected detail used to stand in for the whole, and of the broken paint technique which simply suggested form and movement through abstract marks seemed to have much resonance with the work I was making. And it began to direct my interest. I named my exhibition ‘link’ after one image in which by using computer rotation I created a long line of trees each linked by a single branch. This very much reflected the many conversation I have had with local people who talk much about the connection with nature and between the forces of nature. Many people live by these concepts in their daily life. 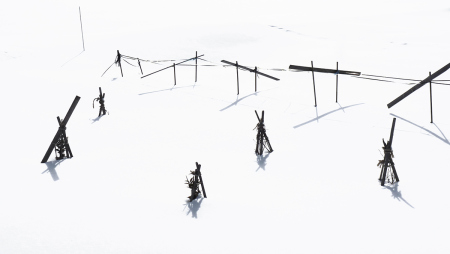 Yoshiko, who knows my previous work, commented that I seemed to have moved away from my normally more conceptual approach into something more personal and free. She is probably right although I am still not entirely comfortable with that. It is the nature of residencies in another culture, they can break into your established patterns of thought and action if you are willing, like the Refugees, to let it happen.

Kellie Gutman writes: Cape Farewell’s journey to the Outer Hebrides has reached its half-way point. The crews have changed each week, but the Associate Director, Ruth Little is onboard for the duration.  Her latest post, filled with wonderful pictures and observations can be seen here.

For all of the expedition posts go here or follow it on our blogroll.