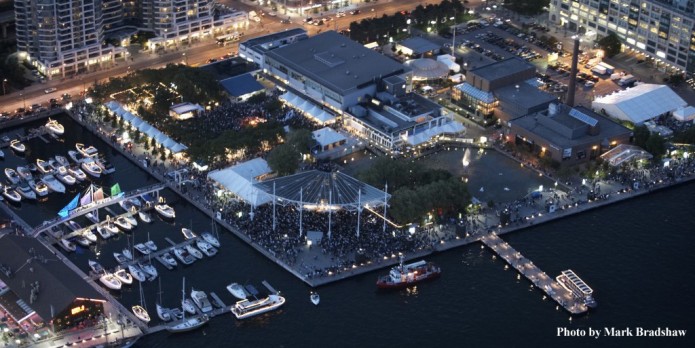 When Toronto’s Harbourfront Centre learned that 95% of its carbon footprint was beyond its control, they changed the equation.

The Harbourfront Centre, on Toronto’s waterfront, is a complex complex. On a sprawling 10 acre site, leased from the city, this non-profit charitable organization presents 4,000 free or low-cost arts and cultural events annually, drawing 12 million visitors each year. Their August event calendar is a study in multicultural entertainment with performances that include the Moko Jumbie stilt dancers, the Spice Island performers and Flambeaux Drummers, and a Canadian Women in Reggae showcase. They also operate as a small city within a city, overseeing two marinas and three parking facilities (which adds to its revenue stream), while partnering with more than 450 community and cultural groups, all the while drawing in government grants and contributions that cover a third of their operating budget.

In 2007, the HFC decided to take a hard look at their environmental impact. As Randy Sa’d, developer and overseer of the Centre’s sustainability effort says, “Being a charity is not an excuse for not taking action.” But what they found was problematic: Ninety-five percent of its carbon footprint was due to the trains, planes and automobiles that all those millions of visitors employ to come to the Centre. Rather than attempting to tackle the costly and highly complex task of addressing that issue, Randy, an expert at strategically focused project management, and his team, turned their attention, and their analytics, inward. Blessed with substantial grants from, among others, the Ontario Trillium Foundation and ADEME, they arrived at a to-do list of over 120 sustainability initiatives, and as of today have completed more than 45 of them; 2.5 million dollars’ worth of effort, completed on a net-zero budget! A couple examples:

The Harbourfront Centre Theatre. What was constructed in 1926 as a storage facility for large blocks of ice, is today a lovely 422 seat theatre, enwrapped by a three-story high glass encasement that serves as an outer lobby. By 2011, that encasement was leaking energy and in dire need of repair. Lobby temperatures on some days were soaring to 104°F. Their outside-the-box solution was to create the first solar art glass project in Toronto. Canadian artist Sarah Hall was commissioned to create this permanent structure, and the result is a piece called Waterglass. It contains 119 hand-painted glass panels as well as a series of glass panels imbedded with over 360 photographic images documenting the history of Lake Ontario. Ten glass panels are embedded with photovoltaic cells that collect solar energy to power the lobby lights and the entire work is treated with Heat Mirror technology which provides the highest insulation values possible for glass.

Back Office Paper. Through partnerships with Xerox and Staples, HFC reduced their paper use by 25%, and the amount of carbon associated with their paper use by 65%, primarily by switching to a more expensive 100% recycled paper. They employed office practices that ranged from the obvious (double sided printing), to Aha! moments (consistent configurations across all the printers) to the high tech (a meter system on the office printers requires workers to swipe their i.d. cards before anything is printed, thus eliminating nearly all erroneous print jobs). In the long run, this multi-department initiative realized a 10% cost savings on all office and cleaning product supplies, even with the more expensive paper.

As important as these projects themselves are, the approach and logistics that have gone into them have given birth to a blueprint of sustainability that could have significant impact far beyond the Centre’s campus. Randy has packaged this acquired knowledge into a teachable program called REFOCUS. The program utilizes a “social enterprise model.” By partnering with a broad range of organizations to disseminate the information, they are able to reach a large and diverse audience with minimal promotional costs.

As outlined on their website, the program presents a path to sustainability consisting of six key elements:

Leadership Capacity: An understanding of how lackluster leadership can hold a sustainability program back, as well as the kinds of skills and abilities that effective sustainability leaders possess.

Change Management Capacity: What is involved in assembling a change management team as well as techniques for effectively engaging stakeholders.

Measurement Capacity: How to build the level of capacity a successful program needs, and the consequences of failing to do so.

Understanding Your Impact: The importance of collecting data, employing a variety of data collection techniques.

Selecting the Best Projects: How to uncover, assess, and prioritize project opportunities.

Report on the Results: The many benefits of reporting annually, why credibility can be just as important as the actual results generated, and practical techniques for developing a strong report.

So far, in addition to working alongside a variety of non-governmental organizations, REFOCUS has partnered with six leading Canadian universities, with several more in the works, to bring their program to students, as well as to administrators responsible for addressing campus sustainability.  It all begins with a day-long certification workshop that includes problem solving exercises, self-assessments, case studies and more. Once certified, practitioners are given access to an interactive guidebook that provides the roadmap for developing a sustainability program, and there is access, as well, to an e-Library full of learning materials. The beauty of the program is its scalability. Its lessons are applicable not only to large, cultural non-profits, but to students interested in learning about sustainability, individuals tasked with managing their organization’s sustainability, as well as government and non-government organizations committed to providing sustainability education and training.

By making this program affordable and available to all, that original focus on the 5 percent of their own problems now has the exponential power to bring about change on an international level. If you would like to get involved or learn more, REFOCUS is interested in hearing from organizations that deliver sustainability-focused education that would be interested in bringing REFOCUS to their audience/membership, or from organizations looking to set up or take an existing sustainability program to the next level by adopting the REFOCUS methodology.