With searchable artwork themes such as ‘Atmosphere’, ‘Energy’, ‘Renewal & Regeneration’, and ‘Waste, Recycling, Consumption’, a new ‘Curating Cities’ database was launched on 30 August 2013. It maps “the increasingly important and emerging field of eco-sustainable public art.”

The ‘Curating Cities’ database is developed as a resource for researchers, academics, artists, curators, educators, commissioning agencies and sponsors working in the field as well as those interested in promoting sustainability via public art.

In addition to descriptive information, the database evaluates the aims and outcomes of each project as well as the external constraints (and subsequent negotiations) that influence the production of public artworks. 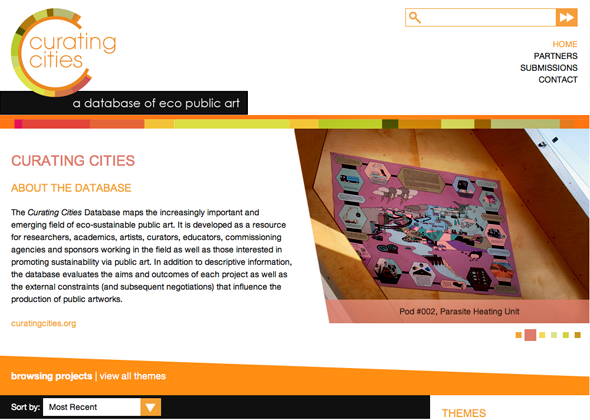 It’s a tad chilly for an outdoor show, but a bunch of Broadway performers will provide one on Wednesday, when the Broadway Green Alliance recognizes its one-year anniversary with a combination celebration and e-waste recycling dropoff in Duffy Square, the center island that runs from 45th to 47th Streets in Times Square. The dropoff begins at 11 a.m., and at noon, cast members will sing a couple of songs and alliance leaders will note the progress after a year of greening efforts.

The alliance was announced with some fanfare last November by Mayor Michael R. Bloomberg. Its mission is to steer Broadway toward environmentally friendly ways of doing business. Has it worked? “It’s the first thing since the AIDS crisis that has brought the entire theater community together,” Susan Sampliner, company manager of “Wicked” and an alliance chairwoman (along with Charlie Duell), said in an interview. “We didn’t know as we started this how many people would get involved and whether diverse groups of people would come together,” she said.

The alliance is also releasing a report to the mayor’s Office of Long Term Planning and Sustainability, summing up the developments so far. In the past year, the alliance and its team of “Green Captains” — there is one in the cast or crew of almost every Broadway show — have:

* Nearly reached the goal of having each of the three major theater owners on Broadway — Jujamcyn, the Shubert Organization and the Nederlander Organization — change all of their marquee and other outdoor lights from incandescent bulbs to compact fluorescents or LEDs. So far, 97 percent have been changed.
* Found in a survey that most participating shows are using rechargeable batteries, digital instead of paper communications and cold water for costume laundry, part of an effort to encourage backstage conservation.
* Worked with the Broadway League and the American Theater Wing to make the 2009 Tony Awards greener by using hybrid limousines, recycling office waste and printing the Playbill on paper made with 30 percent recycled content.
* Worked with theaters outside New York to offset 4,000 tons of carbon emissions resulting from transporting touring productions by investing in wind power, methane digesters and other renewable energy projects.
* Begun meeting with technical directors before shows close to discuss what they can do with scenery and other objects after the final curtain (other than tossing everything into a landfill). As a result, the report says, about 84 percent of scenery from shows that have closed this year has been recycled, reused or stored for future use.

“The biggest challenge right now is making sure the producers and general managers who make the financial decisions start to see an economical reason to do this,” Ms. Sampliner said. While owners can see immediate savings in energy costs, the benefits of designing and building a set with greener products and procedures are less obvious.

Still, Ms. Sampliner is optimistic, she said, and though it is cold outside and turnout for the performance at noon may be low, she pointed out that the event will be a success because it will be collecting computers, cellphones and other electronics for proper disposal or recycling. “We are anticipating somewhere between 6,000 and 8,000 pounds of e-waste,” Ms. Sampliner said.

Did you know that nearly 70% of materials thrown in the trash are commonly recyclable? Help educate your students by educating yourself. Go to the Waste Reduction and Recycling Workshop!