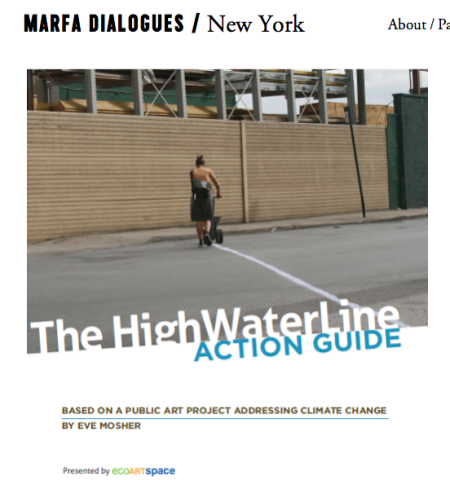 Patricia Watts of ecoartspace recently highlighted the collaboration with artist Eve Mosher producing an Action Guide for HighWaterLine.  Eve Mosher developed HighWaterLine as a personal project, but following Sandy’s impact on New York it went viral (covered by the New York Times and the New Yorker), and rather than travelling around the world doing projects, Eve has worked with ecoartspace to produce an action guide so that people can do it for themselves.  ecoartspace are promising 10 of these based on artists’ projects.

Artists such as Eve increasingly recognising that making their methods explicit so that other people can adopt them is important.  You can find the guide that Eve and ecoartspace have developed here http://ecoartspaceactionguides.blogspot.co.uk/ and more will follow.  We will also categorise posts where methodologies are explicit and reproducible.

Eve just spoke as part of the Marfa Dialogues in New York, and this is how it was described,

Artist Eve Mosher will tell the story of her public art project titled HighWaterLine where she marked the ten feet above sea level line in lower Manhattan and Brooklyn with a baseball line marker over the summer of 2007. Mosher receives many requests to fly to cities around the world to duplicate this project. Since this would be an impossible task, she has recently collaborated with ecoartspace to develop an ACTION GUIDE so that communities around the world can learn about her work and now mark their own line using Mosher’s HighWaterLine as inspiration. The guide was developed for educators, nonprofit organizations and individuals, combining art and science to engage aesthetics while addressing environmental issues. Guide author Patricia Watts and curator Amy Lipton will participate with Eve Mosher for this discussion. 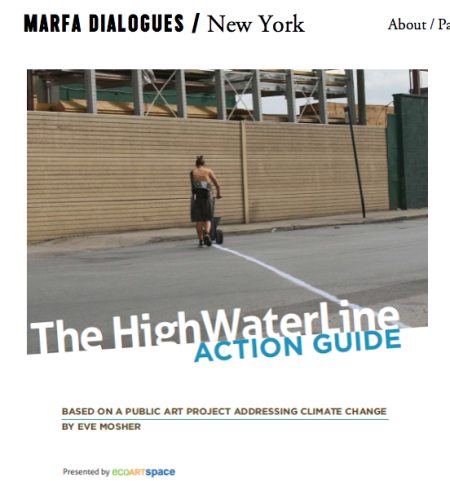 There’s a good video on the project