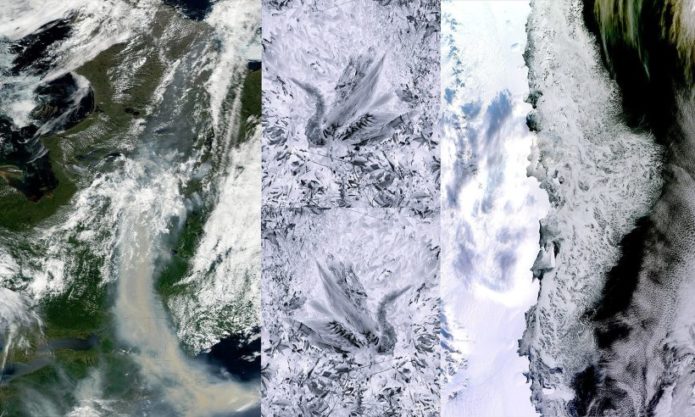 Growing up along Long Island Sound in Connecticut, I developed a close relationship with the seacoast early in life. By the 1980s, I reconnected with my love for the ocean and managed to spend long stretches of time on the Outer Cape in Massachusetts. Fortunately, the Cape Cod National Seashore has preserved much of that coast and prevented considerable oceanfront development. Until that point, my work as an artist had largely focused on abstraction using photography to make large cameraless (photograms) images. As I began to walk the tidal plain along the bayside in the towns of Wellfleet and Truro, I started to think more deeply about the ecology and natural history of the region – and my relationship to it. I made temporal works in the tidal plain using seaweed and stones and shells that would be erased by the next cycle of tides. I combined photo documentation of these sites with my own texts, building a kind of personal natural history.

Most importantly, I began to pay attention – to look closely on those daily walks – at the shape of the beach, the erosion on the dunes, and everything that I stepped over and on. In 1995, I began a long series, that continues to this day, using snails (Atlantic periwinkles) to make drawings in the wet sand as the tide receded. I would arrange the snails in geometric patterns and wait as their movement carved drawings on the sand, presenting a pair of images of their start and the subsequent results of their travels.

In addition, for long stretches over the past ten years, I have walked each morning to make a photograph from exactly the same spot, overlooking the bay, at 7:00 am. This past summer, I did this for 115 consecutive mornings. It has sharpened my awareness of the infinite variety of combinations of bay and sky that present themselves. It also serves as a kind of secular prayer or meditation to begin each day.

The Fire & Ice Series, which I have been working on for several years, incorporates NASA satellite images of major wildfires, glaciers and glacial calving, hurricanes, and floods. For many years, I have been fascinated by satellite images of both astronomical phenomena and our own planet. There is an extraordinary formal beauty to these photographs, but also a powerful inherent tension between that beauty and the reality of the catastrophic or life-threatening weather, fire, or geological events they depict. There is also something about viewing our earth from that perspective that reminds us of our delicate beauty. The 1972 “Blue Marble” image of the Earth from Apollo 17 has sharpened our understanding of how fragile our planet is.

I am now, in my studio practice, deeply motivated by the current global catastrophes of climate change and rising sea level, and the failure to take serious remedial action. Every year, we set new records for heat waves, observe more powerful storms, struggle with massive floods, and watch as thousands of square miles of the planet are scorched by wildfires. As an artist, I feel compelled to respond in some way that is both personal and meaningful. We have all become inured to the continuous stream of images of floods, fires, tornados, hurricane destruction, and famine. With this series, I am hoping to make connections on another level of consciousness. Can art that seeks to generate insight on such a subtle level make a difference? I don’t know the answer to that.

Each piece is the result of pairing two or more high resolution satellite images of fire, ice and/or hurricanes, and then adding a third element utilizing my own photographs. In these works, smoke can become clouds, clouds morph into massive storms, and glaciers become abstractions of dark and light. I hope to reference geological history in some way. There are photographs from my Beach Deaths series – made over many years along the Massachusetts coast – of the remains of birds, fish, and cetaceans that had come to rest on the beach. In Fire/Water/Nests, I also reference birds and their nests, riffing on the formal similarity with hurricanes. Birds, being the direct descendants of dinosaurs (having spanned over 150 million years), are a way of linking the imagery to both species longevity and species extinction. We have also learned that bird populations in North America have dropped by as much as three billion over the past half century.

In Russian Fire/Icelandic Glacier + Big Bang-Yin Yang, I draw from my Found Chalkboardsseries, photographed in empty classrooms when I was teaching at a nearby university. The chalkboards are slightly altered and occasionally combined digitally with hand drawn elements.

In a number of other pieces, I have included the molted shells, tails, and carapaces of horseshoe crabs. For years, I have collected the shells along the shore. I am fascinated by their beauty, and using them in this series, I am referencing their 450 million years of unchanged existence. I don’t see our species as managing such a longevity record. In Cape Cod bay, where high tides now swamp their egg laying areas, these oddly beautiful animals are losing habitat and falling in numbers. In a few pieces in this series, I have also used physical objects such as fragments of whale bone, an animal we once hunted and now hope to save from extinction.

Pinned to the wall in front of me as I write this is the Robert Frost poem Fire & Ice:  “Some say the world will end in fire,/ Some say in ice.”… It plays often in my subconscious as I worked the ideas through.

Daniel Ranalli’s work is in the permanent collections of over thirty museums including the Museum of Modern Art (NY), Museum of Fine Arts Boston, San Francisco Museum of Modern Art, and National Gallery of American Art (Smithsonian). He has had over 150 solo and group shows in the U.S. and abroad, and has been the recipient of two fellowships from the National Endowment for the Arts and multiple fellowships from the Massachusetts Cultural Council. Situated within the medium of photography, Ranalli’s work can often be characterized as conceptual and/or environmental, and is frequently rooted in the balance between control and chance. Daniel lives in Cambridge and Wellfleet, Massachusetts.