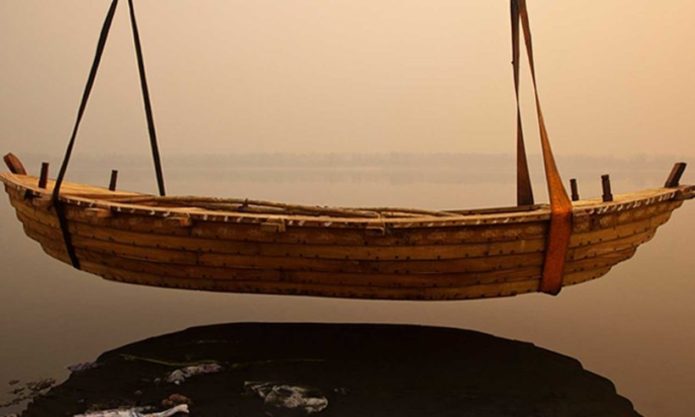 Atul Bhalla is a New Delhi-based conceptual and performance artist. Using photography, video and installation, he has spent the last 21 years addressing the physical, historical, political and religious aspects of water.

In our recent video conversation, Bhalla described a number of events in his early life that provided the foundation for his on-going preoccupation with water and led him to question how water is distributed, stored, regulated, commercialized, wasted, disappeared and polluted. He noted that his hometown of Delhi, a city which receives only 17 days of rain on average per year, cannot provide a 24-hour continuous supply of water to its citizens. In order to distribute the city’s finite water resources, the taps in Delhi are opened only once in the morning and once at night.

Bhalla’s first significant influence relating to water was his childhood memory of the sound of water drops hitting a steel bucket when he woke up in the morning. The water in that bucket was used for the family’s drinking, cooking and bathing needs and had to last until evening, when the bucket could be refilled. That bucket of water was also Bhalla’s first lesson in water distribution, storage and conservation.

Bhalla’s second influential experience occurred when the first public swimming pool was opened in his West Delhi neighborhood. He distinctly remembers feeling that when he was immersed in the water, he was alone, just he and the water. His eyes and ears focused on the visual distortion and sounds under the water’s surface. Bhalla’s time in his community pool allowed him to explore the physicality of water, both its sensual and dynamic qualities as well as its potential for danger and death.

A train ride from New Delhi to Bombay in a second class car during the monsoon provided Bhalla with a third, pivotal experience with water. As he describes it, the train stopped on the bridge over the Virar River, whose flood waters had almost reached the train’s rails. As he gazed outside the car’s open door, Bhalla had an overwhelming desire to jump into the river and become one with the water. It was at this time that he began to understand water’s mysterious lure.

After an unsuccessful (according to him!) first exhibition in 1998, Bhalla traveled along the pilgrimage routes of the Ganga (Ganges) and other holy rivers in India, observing how people both bathed and drank from the same polluted water for spiritual purposes, but then ordered clean, bottled water when they ate in a restaurant. As a Hindu, he himself had done the same. His questions about his own and other people’s behavior around water, their relationships to water and the history that water contains grew exponentially and, along with his earlier memories, became the source of his photos, photo performances and installation projects.

Since Bhalla is such a prolific artist and doing justice to all of his work would require no less than a book (several do exist), I’ll focus here on three of his more recent projects.

In 2014, Bhalla conducted a series of performances entitled Looking for Dvaipayana. The Sanskrit word “dvaipayana” means “that which is surrounded by water” and can be found in two stories from the epic myth, Mahabharata. The first involves a fisherman’s daughter who gives birth to a son on an island in the Yamuna River; the second refers to a hidden, mythical lake. His performances for the project are indicative of the way he often incorporates his own body into his work. They also represent his personal attempt to look for or identify the “lost” water of Delhi. As he has written,

I “perform” at locations named after or for water within my home city, Delhi. Old wells, step wells, old water bodies like old wells have been covered over to make way for roads or for the ease of traffic. Some remain only within the memory of the older generations, referring to a water body lost to time or to greed. The body plays the indexical, of perhaps wanting or attempting to connect to the labyrinths of water tables and sources which keep the city alive over generations but are now disappearing. The sites are locations which may still carry names of old water bodies of Delhi, like ‘ChapparWalaKuh’ (the thatched well) in Karol Bagh Crossing, which was covered in the early 1980’s; Panchkuina Road (Five Well Road), KhariBaoli (the brackish step well), JantaPiau (one of the oldest wells in Old Delhi, right in the middle of the road opposite the Old Delhi railway station).

The abstracted silhouette/body, perhaps a de-humanizing shape and at other times a head in supplication, may be a metaphor for defeat, submission, confession; the head is so bowed down that it is almost about to be admitting guilt; of giving myself/yourself to Dvaipayana (in the form of a river/ lake/baoli/well). The work may be also mourning, a moment of silence…

Objects of Fictitious Togetherness I

Bhalla’s goal with his 2017 installation Objects of Fictitious Togetherness I was to allude to the way in which water became a symbol of friendships and divisions, both cultural and physical, between Hindus and Muslims before and after partition, and to explore the “interplay between memory, post-memory and truth around the Freedom Struggle.” His large scale installation included, among other components, an elaborate round table on which dozens of traditional brass cups of all sizes were placed. In the installation, Bhalla has provided a visual representation of a fictional unity that defies the reality of how the government before partition had separated the Hindu Pani (water) drinking sources from the Muslim Pani ones in public spaces such as Railway stations. Here, though, Bhalla created an environment in which all of the cups of water were exhibited together, without divisions.

On the Edge of the Sea

In 2019, Bhalla completed an installation entitled On the Edge of the Sea in the Senate House of Madras University in Chennai, located in South India on the Bay of Bengal. He explained that he developed the project on behalf of the fishermen of Chennai who have been most impacted by industrialization and are the first to feel the effects of rising waters and climate change. Once located within the confines of the city, the fishermen were forced to move on several occasions to locations north and south of Chennai. In the first instance, they were forced out by the British who wanted to cleanse the city of local fishermen, and then again because of threats resulting from rising tides and erosion.

For the installation, Bhalla wanted to show how the fishermen’s lives and livelihoods have changed and how the historic fishing industry has disappeared from public consciousness. Using photographs of the sea, the fishing villages and the fishermen’s traditional boatmaking trade and homes, imprinted on 22 foot-high scrolls, he has returned them to their traditional location on the edge of the sea.

At the end of our conversation, I mentioned to Bhalla that his dedication over decades to the topic of water reminded me of Roni Horn, an American artist living in New York City and Iceland whose work I highlighted in this series in January of 2018. He admitted to admiring her work and sees a lot of parallel thinking between them. He also appreciates the work of British environmental artist Chris Drury, and Indian artist Shweta Bhattad. Bhalla is currently working on several new projects, including one where he is exploring the way in which some villagers during times of severe drought and flooding blame themselves as if they have somehow angered the gods and, at the same time, are beginning to return to Indigenous habits of planting and accessing and storing water. All of Bhalla’s work challenges us to question our own relationships with water and to heed the changes that are affecting the bodies of water around us. In a non-didactic way, he wants us to see the truth in the way things were and are now.

This article is part of Imagining Water, a series on artists of all genres who are making the topic of water a focus of their work and on the growing number of exhibitions, performances, projects and publications that are appearing in museums, galleries and public spaces around the world with water as a theme.