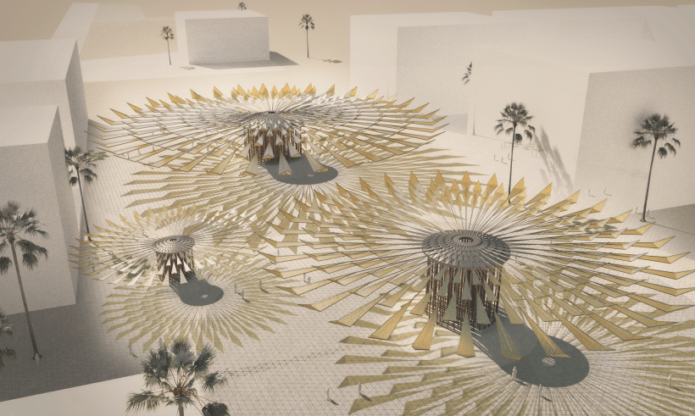 Since 2010, the biennial LAGI competition has invited artists, landscape architects, designers, engineers and other renewable energy enthusiasts from around the world to submit proposals for large-scale works of public art capable of producing clean energy for a specific site. I wrote about LAGI’s first five competitions here and here.

For the special LAGI 2019 Abu Dhabi competition, nearly 300 teams from 65 countries responded to a free and open call to design artwork for a new public park that uses “renewable energy technology as a medium of creative expression.” At the same time, this artwork will provide on-site energy production consistent with the master plan of Masdar City.

“Renewable energy as a medium of creative expression”

Sponsored by Masdar and in partnership with the 24th World Energy Congress, LAGI’s 2019 competition “Return to the Source” encouraged applicants to “design a clean energy landscape for a post-carbon world that will help to power the city and inspire the future.”

Of the 300 submissions, 28 were shortlisted in the first stage of the competition. Collectively, these magnificent and luminous proposals inspire us all to imagine how beautiful a post-carbon world will be. Below is a selection of some of my favorite shortlisted proposals:

The 28 shortlisted designs were on display at the LAGI exhibition throughout the 24th World Energy Congress in Abu Dhabi. The jury, led by Yousef Ahmed Baselaib, Executive Director Sustainable Real Estate, Masdar, announced the two winning designs on the second day of the congress.

The $40,000 first place prize was awarded to New York-based architect Sunggi Park for his team’s innovative Starlit Stratus, an example of his studio’s focus on flexible, re-configurable architecture.

Starlit Stratus incorporates a folding pattern of solar modules inspired by Ron Resch’s origami tessellations. Sections of the triangular geometry are made from conventional rigid photovoltaic material to produce clean electricity during the day, while other sections are made from fabric that can easily fold at night to transform the canopy into glowing orbs that illuminate the urban park.

According to Robert Ferry, LAGI’s founding Co-Director, “What impressed the judges about this project is the pragmatic approach to maximizing solar surface area in a manner that radically and dynamically transforms public space.”

The two gifs below illustrate how Starlit Stratus is transformed from a rectangular light-absorbing “umbrella” during the day to light-emitting globes at night:

For a virtual tour of Starlit Stratus, check out this video which is downloadable from Sunggi Park Studio’s website. Such a brilliant and inspiring project!

“With energy storage so key to a successful transition to renewables, a number of LAGI 2019 entries address this issue,” explained Mr. Ferry in an email. “One such example is the integration of gravity energy storage within the weighted armatures of Sun Flower, the second-place winning entry by Ricardo Solar Lezama, Viktoriya Kovaleva, and Armando Solar.

“As the solar modules of Sun Flower generate electricity during the day, they gently lift the armatures (“petals”) until they reach a vertical position at sunset. The weighted arms are then allowed to fall in a controlled manner to produce electricity after the sun has set and when demand is at its highest as the city begins to illuminate.”

If constructed, the Sun Flower artwork would contribute 1,400 MWh of clean electricity to Masdar City’s grid.

According to Elizabeth Monoian, LAGI’s founding Co-Director, “There were also some outstanding design entries to LAGI 2019 from Emirati design teams, many more than we received to LAGI 2010. For example, The Pulse by Fatima E. Almheiri, Haya M. Eiran, Moustafa M. Abou-Almal, Esam A. Essa, Joseph R. Limeta, and Husam Z. Almuzaini proposes a sinuous parametric form of solar energy that provides many paths of exploration through the park. The Atoms Light by Mona Abudalla Al Ali and Sreegith Madambi Karunakaran is inspired in its form by the microscopic shapes of sand particles, and inspired in its function by the respect for the natural environment instilled by the words of Sheikh Zayed bin Sultan Al Nahyan.”

“The results of this year’s challenge have risen beyond our expectations and clearly point us in a positive direction toward a sustainable future,” said Monoian and Ferry in a press release. “Rather than despair about the havoc that human activity has already wrought on our planet, we can instead unite behind the manifestation of beautiful ideas such as these that reflect an emerging human culture of environmental stewardship.”