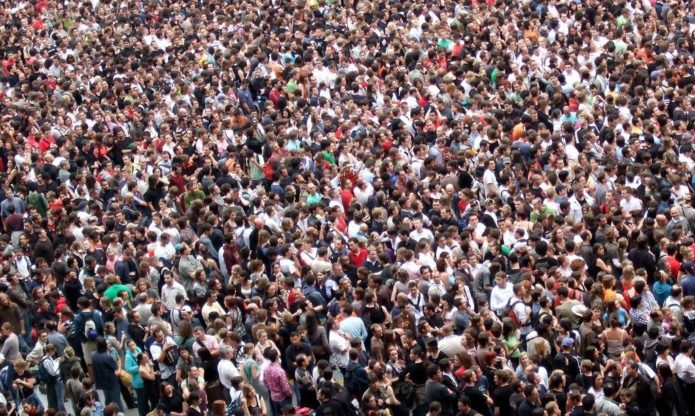 In honor of the UN’s World Population Day, I reflect on my relationship to the topic of global population.

My awareness of the concept of global population was sparked in my high school biology class, while covering carrying capacity in an ecological context. This was the same class that prompted my longstanding vegetarianism; the topics I studied in my early teen years really had an impact on me. Then in college, I read Stephen Emmott’s 10 Billion, a lecture-performance by the scientist-author himself, directed by Katie Mitchell in the UK. His strategy does not involve sugar-coating, as manifest even in the trailer:

There is substantive criticism of Emmott’s text and the research behind it, calling the piece “full of exaggeration and weak on basic science.” Emmott’s words are not easy nor fun to read/hear. However, now, media outlets are a-buzz about climate terminology, as prompted by Swedish activist Greta Thunberg:

Just as there are many ways to call our climatic situation, there are many approaches on what to do about it: for example, my beloved Project Drawdown seeks to connect us back with nature by using demilitarized language. Conversely, according to a CNBC article, Emmott uses “everyday facts to exemplify the energy use we take for granted every day…in order to communicate to non-scientific audiences the ‘inter-connected’ nature of ecosystems and our consumption.” From Emmott’s perspective, “we are screwed.” 10 Billion conjures up helpless feelings about the state of our world, and pushes me out of my comfort zone. When I feel the extent of my comfort zone, I consider what it is that strikes a mental-emotional nerve. In the case of population growth, I think about the populations closest to me, my family. I think about parenthood, particularly motherhood. I think about my ability to have kids, to potentially add to the population. I think about my parent’s own decision, their choice to have kids and reproduce, thus adding to the population.

These thoughts are, in part, why I asked an all-female panel of sustainability pioneers about motherhood. I discuss this panel, hosted by Women in Global Affairs, as part of my Climate Week 2018 article. After academic presentations by the panelists, the event transitioned to a Q&A with the audience (of predominantly women). Specific questions arose regarding the power of women in sustainability. This included a question about the fashion industry, and how to wield consumer power to push companies towards less extractive and exploitative practices.

During the Q&A, I asked the panel about their relationship to motherhood, especially in the context of our planet’s carrying capacity. The question of whether or not to have children is one that I have the privilege to ask myself, and I have the tools to make whichever choice I desire. I take this for granted, but I know that not every woman has this privilege. I was curious to hear from the panel of seven women about their perspectives on this personal and politicized topic. Coincidentally, one panelist had to leave at that moment to go home to her newborn baby. Another responded that motherhood was one of the best things she’s done, to bring two people into the world who care and can enact positive change. A third panelist was also proud to be a mother, and recognized the people in her life that support her decision, and help her in balancing family and work. She emphasized her choice to have only one child, in consideration of the number of people already on our planet.

Finally, the fourth panelist Dr. Wanjiru Kamau-Rutenberg, who lives in Kenya with her husband and two children, echoed pride in motherhood, and also broke open the conversation. She pointed out that my interpretation of carrying capacity accounts for the planet’s population living at the rate that we do in the West – that the whole world does not live this way, and that it’s not about how many new people are being brought into the world, but about how they are brought up (in the U.S., how they perpetuate a capitalist lifestyle). Wanjiru also took issue with the American mindset in general, one that in some ways sees itself as the creator of sustainability – other cultures have been living sustainable lives for generations, and the reason we are needing to scale up sustainability efforts is a result of Western consumption! As Wanjiru summarized, the individualism that leads to exacerbated climate change is the same mindset that elected Trump, all informed by our country’s genocidal beginnings.

For me, the power of the Women in Sustainability event was in the sheer number of women in one room together. We don’t often discuss topics of population, let alone carrying capacity, at the intersection of arts and climate. But the arts are aptly poised to open up spaces for difficult discussions, whatever form the creative act may take.

The UN’s approach to tackling this topic is to create a day like World Population Day, “which seeks to focus attention on the urgency and importance of population issues.” This year’s theme “calls for global attention to the unfinished business of the 1994 International Conference on Population and Development…where 179 governments recognized that reproductive health and gender equality are essential for achieving sustainable development.” Important reminders that the movement for a sustainable planet must come with justice and equity for all people, all over the globe.

This article is part of the Persistent Acts series which looks at the intersection of performance, climate, and politics. How does hope come to fruition, even in the most dire circumstances? What are tangible alternatives to the oppressive status quo? The series considers questions of this nature to motivate conversations and actions on climate issues that reverberate through politics and theatre.

Julia Levine is a creative collaborator and vegetarian. Originally from St. Louis, Julia is now planted in the New York City downtown theatre realm. As a director, Julia has worked on various projects with companies that consider political and cultural topics, including Theater In Asylum, Honest Accomplice Theatre, and Superhero Clubhouse. She is on the Marketing team at HERE Arts Center and is Artistic Producer of The Arctic Cycle. Julia writes and devises with her performance-based initiative, The UPROOT Series, to bring questions of food, climate, and justice into everyday life.