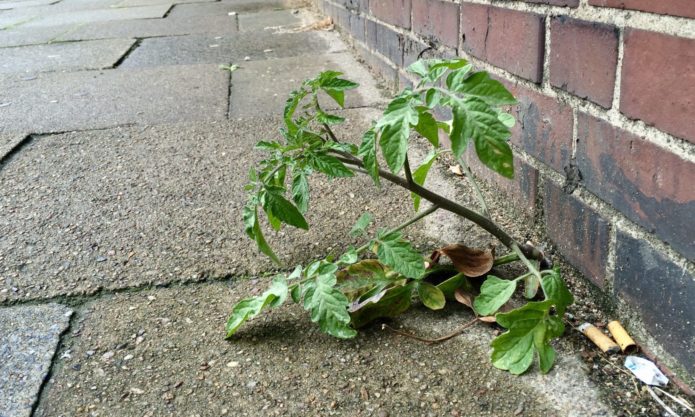 In late October 2018, Canada’s Prime Minister Justin Trudeau visited the National Gallery of Canada to tour Anthropocene, the international multimedia art exhibit by renowned photographer Edward Burtynsky and filmmakers Jennifer Baichwal and Nicholas de Pencier. After his visit and photo ops, the Prime Minister tweeted earnestly: “We have a responsibility to our kids and their kids to protect our environment. The #Anthropocene exhibit is a stark reminder that the time to act is now.” [Emphasis added.]

The three artists presented the Prime Minister with a special edition of their Anthropocene Project book. In addition to Burtynsky’s hauntingly beautiful photographs of ravaged industrial landscapes, this book contains 11 poems from The Plasticene Suite by the celebrated Canadian poet, novelist and activist Margaret Atwood. A segment from one of these poems should make us all squirm, collectively:

We are a dying symphony.
No bird knows this
But us – we know
What our night magic does.
Our dark night magic.

Eight months after Mr. Trudeau toured the Anthropocene exhibit, Canada became the third country (after the UK and Ireland) to declare a national #ClimateEmergency, on June 17, 2019. You’d be forgiven for thinking that maybe, just maybe, a major art exhibit about humanity’s devastating signature on our planet might have influenced government energy policy. Think again.

Less than 24 hours (18 hours and 17 minutes to be exact) after Canada declared a climate emergency, Mr. Trudeau’s cabinet re-approved the expansion of a $5.5 billion USD controversial pipeline that will carry nearly a million barrels of crude oil per day from Alberta’s oil sands to the British Columbia coast for export to Asia. At the same time that Mr. Trudeau made this announcement, Alberta was fighting a 300,000 hectare climate-fueled wildfire, experiencing its driest conditions in 40 years. So it goes.

How did Mr. Trudeau justify expanding a pipeline in the middle of a climate emergency? “We need to create wealth today so we can invest in the future. […] Every dollar the federal government earns from this project will be invested in Canada’s clean energy transition.”

It’s not just Canada. The four countries that have, to date, formally declared a #ClimateEmergency – UK, Ireland, Canada and France – collectively provide $27.5 billion USD annually in fossil fuel subsidies for coal, oil and gas. These subsidies involve a variety of tax breaks, financial incentives and support for private – let me repeat that, private – companies exporting abroad.

According to an article in this week’s The Guardian, G20 nations have almost tripled the subsidies they give to coal-fired power plants in recent years, despite having pledged 10 years ago to phase out fossil fuel subsidies. Citing a new study by the Overseas Development Institute, The Guardian’s Damien Carrington quotes Japan’s Prime Minister Shinzo Abe saying in September 2018 that “Climate change can be life-threatening to all generations … We must take more robust actions and reduce the use of fossil fuels.” [Emphasis added.] Sound promising? Think again: Japan ranks third among G20 nations with the largest coal subsidies.

No wonder people are losing confidence in elected “leaders.”

I am reminded of Isaac Cordal‘s subversive 2011 installation “Follow the Leaders” in a Berlin puddle which, after going viral on social media, has forever since been referred to as “Politicians Discussing Climate Change.”

I’m willing to bet that Cordal’s photo of a group of his clay businessmen submerged in a Berlin puddle will re-appear and re-appear on Twitter for years if not decades to come. It is a perfect example of the subversive nature of art: how artists must first create friction in order to generate new ways of seeing, understanding. To me, this is climate change art at its finest.

And yet, for all the brilliance and urgency of a Cordal or a Burtynsky, what is the point of “climate change art” if our so-called elected “leaders” effectively ignore it by speaking to us in platitudes?

I realize that not all climate change art is purposeful and/or prescriptive. But I think it is safe to say that the majority of artists grappling with climate change today do hope that their art will effect positive change – whether that means raising awareness, changing attitudes, motivating behavior, inciting action or influencing policy.

I am beginning to think so. You may not agree; I welcome your comments below.

But if there is one thing we can agree on, please, let it be this: No more images of polar bears stranded on ice floes. We can do better.

“Climate change isn’t about polar bears or the future; it’s about you and me, right here, right now,” explains climate scientist Katharine Hayhoe:

A powerful new book about individuals struggling against overwhelming odds is Richard Powers‘ brilliant The Overstory – winner of the 2019 Pulitzer Prize in Fiction. Structured like a tree – roots, trunk, canopy, seeds – this epic 500-page story is, at first glance, a passionate paean to trees, described as “the most wondrous products of four billion years of creation.”

This is not our world with trees in it. It’s a world of trees, where humans have just arrived. [. . .] Trees know when we’re close by. The chemistry of their roots and the perfumes their leaves pump out change when we’re near.

But beyond the science and wonder of trees, Powers’ The Overstory is also a hymm to collective action. In this fictional tale set in the 1980s, nine disparate characters (each of whom has his/her own “tree story”) are drawn together through collective action at an anti-logging protest camp in the last old-growth forest of the northwestern United States. Not all ends well. Nevertheless, Powers’ hopeful message is that nothing will change until citizens band together for political and systemic change – à la #climatestrike, #FridaysForFuture, or Extinction Rebellion. Waiting passively for politicians to “fix it” for us is futile, as Cordal so cleverly reminds us.

This banding together for collective action is, in my opinion, the best way that artists can “change the narrative” about climate change. As eco-anxiety increases, artists can shift our focus away from dystopic discourse to climate narratives that reduce feelings of isolation and hopelessness, while simultaneously helping audiences visualize a role for themselves through collective action. Amy Brady has written two excellent articles here and here on how a new generation of climate fiction (cli-fi) authors are leading the way “to envision new, more sustainable and compassionate social structures” in which collective action plays a leading role.

The drama, then, lies in the emotional arcs of the characters as they face their lives with alternating hope and despair, knowing that while the future looks bleak, it has yet to be written.

In a similar vein, Project Drawdown‘s Paul Hawken said on a recent podcast that “the mindset that will solve the [global warming] problem is collaborative.” [Emphasis added.] In reference to his organization’s best-selling book that ranks the top 100 most substantive solutions to global warming according to their financial, social and environmental benefits, Hawken explained: “[It] is all about narrative, really. It’s not a fear-based book… fear isn’t a good place to start communication. Fear doesn’t work.”

By focusing on solutions that already exist – three of the top 10 solutions involve renewable electricity generation – Project Drawdown is simply “reflecting back to the world what it is already doing.” For those feeling overwhelmed by the negative discourse that dominates our social and mainstream media, focusing on tangible solutions gives agency. The new documentary film 2040, by the Australian filmmaker Damon Garneau, presents a hopeful vision of what the world might look like if we adopted many of Drawdown’s top solutions:

I’ll end here with another plea for collective action from the prodigious Icelandic-Danish artist Olafur Eliasson: “The tools for dealing with our changing climate will have to come from all fields; we all need to work together – scientists, artists, architects, businesses, governments – if we are to avoid the worst effects of climate change.”

P.S. A nod to John Lennon for the title of this post.