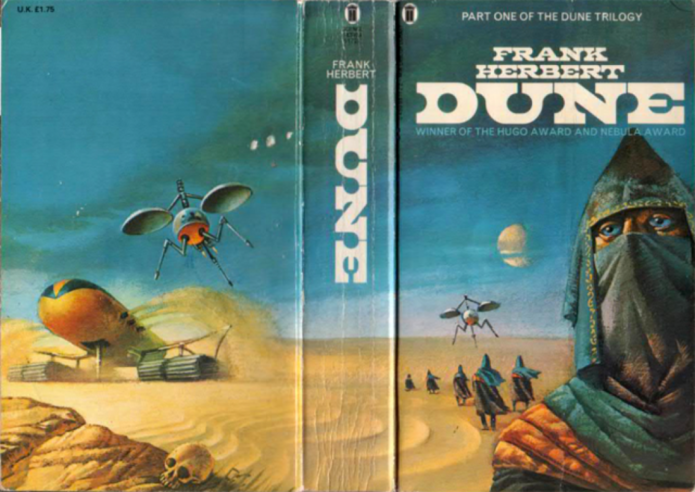 May 8, 2019Artists and Climate Change

Science fiction writers create stories that take place in the future and include inventive settings and imaginative elements such as new universes and societies, time travel and extraterrestrial beings. American writer Robert Heinlein (1907 – 1988), often considered the “dean of science fiction writers” and author of classics, Stranger in a Strange Land and Starship Troopers, referred to the genre as “realistic speculation about possible future events, based solidly on adequate knowledge of the real world, past and present, and on a thorough understanding of the nature and significance of the scientific method.” Effective science fiction challenges us to examine the physical, moral and political consequences of new technologies and scientific inventions as well as aspects of governance, society and human behavior. As global warming and climate change have become an increasingly important part of our collective consciousness, a number of science fiction writers have imagined how future worlds will function without adequate sources of water, the fundamental requirement for life.

Dune by Frank Herbert (1965) is the classic story of a society where water is almost non-existent.Often considered to be one of the best science fiction novels of all time, Dune is seton an inhospitable desert planet called Arrakis. The planet is populated by the Fremen, a species of human-like people who, in adapting to their arid environment, have developed behaviors that revolve around the conservation of water. Access to water is so critical to their existence that they consider the acts of spitting and shedding tears to be signs of extreme reverence to the receiver, since those who respond in this way are willingly releasing what is desperately needed to live. The Freman have even designed clothing that captures and recycles perspiration, and they regularly make what we would consider to be cruel life-and-death decision based on the needs of their whole community: they do not waste their limited supply of water on the wounded or fatally ill.

Rereading Dune recently while severe drought conditions were occurring over large areas of the Earth was an eerie experience and has reinforced my admiration for Frank Herbert who, as early as 1965, anticipated the aridification happening today.

In her 2014 novel Memory of Water, contemporary Finnish author Emmi Itäranta has set her story of a near-waterless future society in a military state called New Quan, located in the far north of the Scandinavian Union. Residents of New Quan receive monthly water quotas, which are strictly enforced by water guards who execute those caught building illegal water pipes. Water is so valuable in Itäranta’s world that it is used as currency for food and other daily necessities.

Noria Kaitio, the book’s main character, is a young tea master. A “guardian of water and its servant,” she is responsible for maintaining a secret spring that has served the tea masters in her family for generations. Noria has found a series of discs from “the past world,” which tell the real, hidden story of what happened to the earth. They tell of “ruin and devastation, of oceans reaching towards the centres of the continents, swallowing land and fresh water. Millions fleeing their homes, wars fought over fuel resources revealed under the melting ice until the veins of the earth ran dry. People wounding their world until they lost it.”

In addition to water, a central theme running throughout the story is the moral dilemma many of the characters must face when they are given the option to betray their friends and neighbors in exchange for water rewards. The characters who make the choice to become informers of water violators must witness the dire consequences and live with their decisions for the rest of their lives.

I was very moved by the poignant passages in the novel that describe the yearnings of a people for a time when water flowed freely and snow and ice existed in their land. Noria described how:

I once did an experiment. I filled a bucket with water and emptied all the ice I found in the freezer into it, sneaked it into my room and locked the door. I pushed my hand into the icy wrap of water, closed my eyes and summoned the feel of past-world winters about which I had read so many stories. I called for white sheets of snow falling from the sky and covering the paths my feet knew, covering the house that held the memory of cold in its walls and foundations. I imagined the snowfall coating the fells, changing the craggy surfaces into landscapes as soft as sleep and as ready to drown you.

In another passage, Noria relates how tea masters have always told a story passed on from previous generations that described how water has “a consciousness, that it carries in its memory everything that has happened in this world from the time before humans until this moment.” Other artists in other disciplines who are working with the topic of water have considered this concept, including spoken word artist, Roni Horn, whom I’ve highlighted in a previous post. Horn imagined how the Thames River contains “not just the rats and sewage but the viruses and bacteria like hepatitis, dysentery, E. coli, biles and even a remnant of the plague.”

Memory of Water, Emmi Itäranta’s powerful science fiction novel, ultimately refers to both water’s memory of everything that has already occurred and the memory of what the world was like when fresh water flowed freely and abundantly.

Another speculative, contemporary version of a future society without enough water, American author Paolo Bacigalupi’s 2015 science-fiction thriller The Water Knife, is set in the American Southwest of the near future. States experiencing life-threatening drought are fighting over access to the limited waters of the Colorado River. Texas is uninhabitable; Nevada and Arizona are competing for water rights; California is plotting to take all of the water; water refugees are seeking sanctuary, and; Las Vegas stands as the model community where water is constantly recycled.

The Water Knife reads like an updated version of the classic western with gun-slinging bad-guys-for-hire protecting the water rights of corporations. Angel Velasquez is the Water Knife, whose job is to find and keep as much water as he can for Las Vegas through whatever means possible. Angel feels no remorse for the lives he has taken or the work that he has done. In a 2015 Kansas City Star interview, Bacigalupi describes his fascination with how people in dire circumstances make moral choices that they otherwise would not make. As in Itäranta’s Memory of Water, characters in The Water Knifemust decide how far they will go to survive.

Frank Herbert, Emmi Itäranta and Paolo Bacigalupi have written three chilling versions of societies where the once-fertile land has turned to desert, water has become a valuable commodity, corporations and governments use access to water to control populations, wars are fought over water rights, and individuals are forced to betray their friends and family in order to survive. As effective science fiction writers do, they have provided us with a realistic warning of what is at stake. We would be foolish to dismiss their predictions as simply stories that are meant to entertain us when the real world tells us otherwise. In just the first two months of 2019, journalists from the New York Times have reported how India has threatened to “cut back on water flowing through its rivers to arid Pakistan” as a weapon of retaliation for a suicide bomb attack, how “In the face of a prolonged drought, the federal government could step in and reduce water use in the Southwest” and how “around the world, vanishing glaciers will mean less water for people and crops in the future.” Just as visual artists, musicians, playwrights, poets and other creatives have used their art to call attention to the predicted impact of climate change, so do these science fiction writers appeal to our love of stories in order to help us understand what could be the future of water.

For more on Emmi Itäranta, see our previous article by Mary Woodbury.

This article is part of Imagining Water, a series on artists of all genres who are making the topic of water a focus of their work and on the growing number of exhibitions, performances, projects and publications that are popping up in museums, galleries and public spaces around the world with water as a theme.