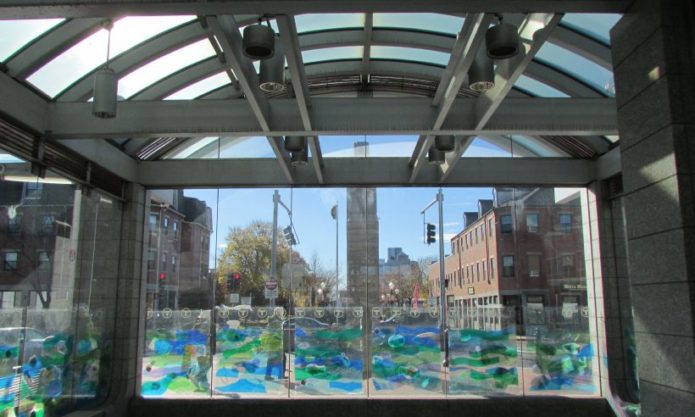 During a period of professional transition, a random opportunity presented me with the chance to use public art to engage people on climate change – something I had wanted to do for several years. This first installation led to an ongoing project which, after five years of incremental growth, is about to jump scale and impact. As I look back, one take-away from this project is that one person with a vision and persistence can make a difference. Anyone who wants to have an impact, in any arena, should know that we are all change-makers. It takes heart, work, doggedness, supporters, and luck, but change does come from individual dedication combined with community. In fact, that is the only way that change happens – one action at a time. This is just one story out of many.

Rising Waters is a flood warning project where I put lines in the landscape with community participation to show where future flood levels will be. I began Rising Waters in 2013 as Rising Tides at HarborArts, an outdoor art venue in a shipyard and marina in East Boston, Massachusetts. After I was invited to participate in the group show Occupying the Present, curated by Elizabeth Michelman, I walked the site with no idea of what I would do. Having attended conferences about sea level rise, I kept wondering where the water would be in the future, and, as an architect, began imagining lines in the landscape marking future high tide lines. The rest was implementation. I painted a series of rising colored lines on the facing pier: six lines, one foot apart, to show that sea level rise is incremental, implying that we can stop at any point – if we have the will. I also created a message-in-a-bottle companion installation to spur people to think about their responses to sea level rise, and invited them to submit notes to the project which I posted on my website.

HarborArts led to Rising Waters installations in the Maverick MBTA subway station and Neighborhood Health Center in East Boston. Students from the East Boston Neighborhood of Affordable Housing (NOAH) teen workforce program and younger students in an after-school program helped me make the window art. The artwork went up as a pointer to a storm preparedness event for the community and then remained for a month.  When we installed the artwork, the subway station managers told us it would be vandalized the first night, but it remained untouched until we removed it. T riders were proud of it, commenting on how beautiful it was, and were shocked to see where the water would be.

Next, I installed Rising Waters in six MBTA subway stations in Boston and Cambridge. The artwork was made and installed with participation from students in several public school districts, students at Harvard College, and community members. The students, particularly at Revere High School and Boston Latin, were excited to be part of a larger project and worked many afternoons after school, making the artwork with great care. Many students said they didn’t know about sea level rise until this project. At the Kendall MBTA Station in Cambridge, a station worker read the description, gasped, and then ran off. Every day tens of thousands of commuters passed by the artwork, reaching several hundred thousand people in all.

In 2015, I installed Rising Waters at the Sustainable Brands Conference in San Diego as fish stickers and flags. Since I couldn’t install ahead on the site, I added more fish between every session, growing the installation throughout the conference – it took on an aspect of performance art. Reaching corporations was important to me, and the installation caught the attention of dozens of people who asked about it out of 2,000 people from industry who saw it.

By the end of 2016 I had installed Rising Waters over sixteen times – including on riverbanks, fencing, storefronts, a ferry dock, a beach, around trees, and even flowerbeds, in Eastern Massachusetts and in San Diego, California. I experimented with the right medium and format for each site and audience, using fish prints, fish flags, handprinted stickers, and various materials in search of the right combination of permanence, removability, and low environmental impact. Although the plastic film I used was reclaimed from the waste stream, I ultimately abandoned it as too conflicted a message for oceans. Ultimately, I returned to my original concept of simple lines with an installation on the Guna Yala (San Blas) islands off the coast of Panama.

The Guna indigenous tribe, who occupy this archipelago of 350 islands, will be flooded off their coral atolls by 2030, and will join the ranks of climate refugees from around the world. Flying over the rainforest in a 6-seater to reach these remote islands, with a suitcase full of supplies, knowing that I had to make this work regardless of what I found, was exciting. I had entered a new phase, though I didn’t know where it would lead me. This installation of Rising Waters showed the impending cultural destruction of a tribe who will be forced to leave their island lifestyle behind, and relocate to the mountains. Photographs from this installation were exhibited at the United Nations for The Ocean Conference in 2017. Being part of a global community working hard to tell the story of sea level rise and climate change made me redouble my own efforts.

Over time, Rising Tides became Rising Waters to include fresh water flooding from rivers and rain, and appeared along the Atlantic and Pacific oceans, Caribbean Sea, and soon, South China Sea. With supporters in Hong Kong, we are establishing a Rising WatersChapter as the first of many around the world. I recently returned from Hong Kong where I worked with students and teachers at three schools who are launching the project. Renaissance College Hong Kong wrapped posts in their school courtyard, and additional sites will install in March. In student workshops at GT College and Hong Kong International School, I introduced the project and students worked on designing their own companion art projects. Chapters will be encouraged to localize their installations with companion events, artwork, performances, and educational materials and we are expanding our on-line educational resources by collaborating with other NGOs.

Other groups will be using Rising Waters as collaborations with their own climate advocacy projects this spring and summer, and we are always looking for additional partners. What began from my personal desire to visualize climate change impacts has become a method to launch other people on their own art, climate, and action path, empowering people to act on climate across the globe.

After 20 years of practicing architecture, Susan Israel founded Climate Creatives to make environmental issues accessible to the public, empowering and inspiring people to take action. Previously, she was a Founder and Principal at studio2sustain, Energy Necklace Project, and Susan Israel Architects. She is a licensed Architect, a LEED AP, ArtWeek Advisor, and long-time member of the Harvard Alumni Association Board of Directors. Susan speaks at events nationally and internationally. She holds an A.B. from Harvard College, Master of Architecture from Harvard University Graduate School of Design, and attended the Museum of Fine Arts School in Boston.