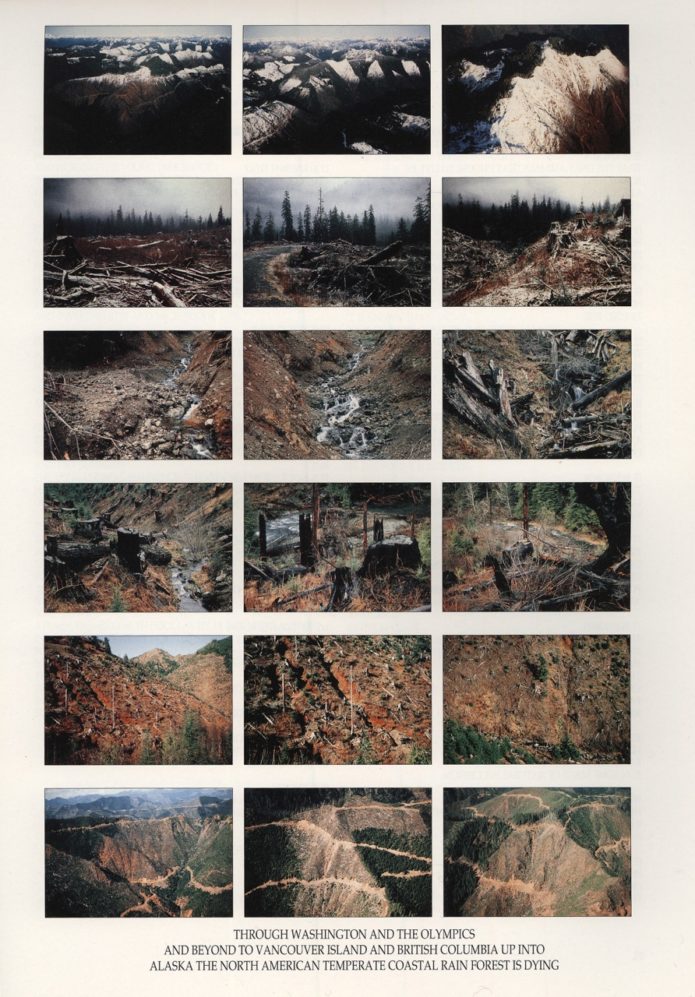 Artists have been valuing nature probably since we first marked the wall of a cave or whistled like a bird – artists have always rendered nature visible. Artists valuing nature have explored human ‘value’ (Monet’s Haystacks and Turner’s Rain, Steam and Speed both render human use of nature visible), but they have also articulated human meaning imposed on nature (Shakespeare’s King Lear thinking the storm is nature mirroring his mental state). ecoartists over the past 50+ years have focused not so much on the literally visible but on making visible the relational and systemic. Their motivation is often the destruction caused by our extraction of value from nature without regard to health or sustainability.

Most art, including the historical precedents mentioned and in particular ecoart, might be seen in juxtaposition with other forms of valuing nature such as ecosystem services. Dave Pritchard articulated the deeper history underlying the emergence of the ecosystem services in an email to the ecoartnework listserve on 9 April 2011. He wrote,

For a time, in the 1970s-80s, there was some of the kind of “reconsideration” you describe [referring to a previous post], with the “deep ecology” of Naess, Bateson, Berry et al. But if you analyse the evolution of the actual policy and advocacy discourse at 10-yearly intervals, for example from the 1972 Stockholm Conference to the 1982 World Conservation Strategy to the 1992 Rio Conference to the 2002 Johannesburg Summit (and then maybe in advance of the Rio+20 summit in 2012 look at the Aichi targets adopted last year), it has swung completely away from any ethics of “existence value” for the non-human component, to a forced justification (in adversarial arenas) in terms of “sustainable development”, “wise use”, “evidence-based conservation”, “ecosystem services” and (largely monetary) valuation of those services. The environmental movement (of which I am a part) congratulates itself on having found better ways of expressing the critical nature of ecosystems within broader mainstream audiences and processes, in this way. But this has all been done by becoming MORE anthropocentric and utilitarian; not less.

Dave Pritchard’s drawing out of one vector of the trajectory of valuing, away from the intrinsic and into the instrumentalised, provides a useful frame for understanding that what we see now as oppositional – arts and humanities approaches versus social and natural science-based methods of valuing nature. His marking of the moments in the intergovernmental conferences and his articulation of the key phrases is the beginning of a cultural history of environmental policy.

Professor Emeritus Anne Douglas and I have been writing about (and working with) the Harrisons, the pioneering post conceptual ecological artists, for some years now. Sadly, Helen Mayer Harrison died this year (aged 90), but we continue to work with Newton Harrison. You can find out more about that work by checking out The Barn website, and by searching this site http://ecoartscotland.net.

We are just in the process of finishing a new essay which focuses on the ways in which the work of the Harrisons might address calls for epistemologies other than the positivistic one which has increasingly dominated our understanding of the natural world. This builds on two other essays we have published recently on their practice and in particular their poetics.

The Harrisons’ work focuses on the lifeweb and in particular on points of inconsistency and contradiction saying,

We have come to believe that inconsistency and contradiction are generated by the processes of cognition, thinking and doing, and have the important role to play of stimulating and evoking creativity and improvisation, which are inherent in the processes of the mind that have led us to do this work.
Helen Mayer Harrison and Newton Harrison, ‘Public Culture and Sustainable Practices: Peninsula Europe from an ecodiversity perspective, posing questions to Complexity Scientists,’ (Structure and Dynamics: eJournal of Anthropological and Related Sciences: Vol. 2: No. 3, Article 3), p23

In our essay ‘Inconsistency and contradiction: lessons in improvisation in the work of Helen Mayer Harrison and Newton Harrison’ published in Elemental: An Art and Ecology Reader, we look particularly at the ways that the artists use moments of inconsistency and contradiction as points of intervention. We explore the way they engage imaginatively with metaphor – for them it is dysfunctional metaphors (such as calling places to live ‘developments’ rather than ‘settlements’) which underlie the inconsistencies and contradictions. The works take the form of policy proposals, manifest in poetic texts and images, installations and films, which offer alternative ways of imagining life where we put the health of the lifeweb first.

The second essay, ‘What poetry does best: the Harrisons’ poetics of being and acting in the world’ published in the Harrisons’ The Time of the Force Majeure, a survey of their collaboration over 50 years, focuses on their language, in particular dialogue, and their understanding of improvisation. We explore the way that the works open up the possibility for the audience to imagine living differently, as part of a healthy lifeweb.

The Harrisons’ overarching project, which they have pursued for something like 50 years, is to put us humans back into the ecosystem. This is an underlying refrain in all their work, for example in Serpentine Lattice (1993) they said,

THEN
A NEW REVERSAL OF GROUND COMES INTO BEING
WHERE HUMAN ACTIVITY BECOMES A FIGURE
WITHIN AN ECOLOGICAL FIELD
AS SIMULTANEOUSLY THE ECOLOGY CEASES T0 BE
AN EVER SHRINKING FIGURE
WITHIN THE FIELD OF HUMAN ACTIVITY
Harrison, Newton and Harrison, Helen Mayer, Serpentine Lattice, the Douglas M Cooley Memorial Gallery, Reed College, Portland, Oregon 1993

Within this the Harrisons have taken on issues of water, soil, forests and brownfield. They have worked in watersheds and bioregions as well at the scale of the European Peninsula and the Tibetan high ground. The climate crisis – which they define as having three aspects – sea level rise, heatwave and biodiversity loss/extinction, is the manifestation of our dysfunctional relationship with the lifeweb. In essence their message is the message of Deep Ecology.

Yet Serpentine Lattice, created at the invitation of Reed College in Portland, Oregon, in addressing the destruction of the Pacific Temperate Rainforest, includes a proposal for redirecting a proportion of Gross National Product to the restoration of the forest.

In Peninsula Europe (2001) they enumerate the amount of water that falls on the European peninsula annually (1,430 cubic kilometers per year and that’s just on the high ground). Based on this they propose a Water Tax to pay for the restoration of the soils and the reforesting of the land above 360 meters.

This might seem superficially similar to recent approaches which have moved from analysis of ecosystem services to natural capital accounting. These latter moves have resulted in statements such as the Great Barrier Reef is an asset worth $42 billion dollars to the Australian economy, or bees are worth £651 million annually to the UK economy.

Our essay addresses both how these figures and proposals operate as part the Harrisons’ poetics, contributing to the repositioning of human systems within the ecological systems. The Harrisons’ approach to valuing nature does not start with a financial given (eg the value of UK Agriculture, and then identify the importance of bees, quantify bees, and financialise bees). The Harrisons’ works start with an ecological reality, an intrinsic good, such as the Pacific Temperate Rainforest. Often this is an already damaged ecosystem. The art work makes visible the value of the whole ecosystem and offers quantification in order to propose new human systems (such as taxes) that begin to remedy the impacts of extraction.

Chris Fremantle will be presenting a case study on the Harrisons’ Greenhouse Britain: Losing Ground, Gaining Wisdom (2007-09) in the ‘Valuing the Arts Valuing Nature’ session at the Valuing Nature Conference 2018 this week.

It has been established by Chris Fremantle, producer and research associate with On The Edge Research, Gray’s School of Art, The Robert Gordon University. Fremantle is a member of a number of international networks of artists, curators and others focused on art and ecology.</ br></ br>