For this monthâ€™s renewable energy series, I revisit one of my favorite subjects: the critical role of architects in the global fight against climate change, using the upcoming Venice Architecture Biennale 2018 as an entry point.

In 2018, I will attend my first Biennale di Venezia, the worldâ€™s oldest and most prestigious contemporary art exhibition, founded in 1895. Music, cinema and theatre festivals were added in the 1930s; architecture in 1980; dance in 1999. For the past two decades, the Venice biennale has alternated between art and architecture, respectively, during odd- and even-numbered years.

The Biennale Architettura 2018 will run for six months, from May 26Â to November 25,Â 2018, and occupy the Giardini di Castello and Arsenale venues in the eastern part of Venice. Several concurrent cultural events and art/architecture exhibits will be organized in parallel with the official biennale, including the European Cultural Centreâ€™s TIME-SPACE-EXISTENCE international architecture exhibit that will display six of my photos of wind turbines, considered a form of industrial architecture.

The 2018 biennale, formerly called the 16th International Architecture Exhibition, is curated byÂ Irish architects Yvonne Farrell and Shelley McNamara. They have chosen Freespace as the title and organizing theme. According to the curators, Freespace describes â€œa generosity of spirit and a sense of humanity at the core of architectureâ€™s agenda.â€

Architects participating in the 2018 biennale are free to interpret the concept of â€œfreespaceâ€ in any way they choose. The curators explain their choice of Freespace as follows: 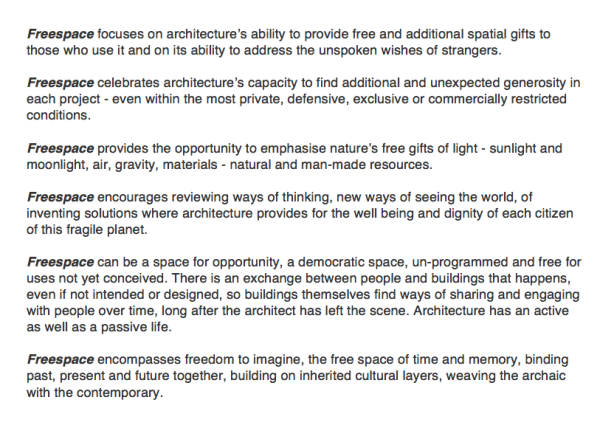 As a photographer focused on the energy transition, I would have liked to see here the inclusion of â€œnatureâ€™s free gifts of energyâ€ â€“ solar, wind, geothermal, water â€“ as an essential element of Freespace. After all, architects and architectural firms around the globe are already rethinking how they use â€œnatureâ€™s free giftsâ€ â€“ both renewable and non-renewable.

A great example is Skidmore, Owings & Merrillâ€™s forthcoming skyscraper in Jakarta, Indonesia: the Pertamina Energy Tower is the worldâ€™s first supertall tower for which energy is the primary design driver. This 500-meter tower gently tapers towards a rounded open top, creating a wind funnel that sucks air inside the building to turn a series of vertical wind turbines; electricity produced from these turbines will help the skyscraper achieve net-zero energy status. Solar, passive solar and geothermal energy are also generated on-site. This is truly an inspiring design and a stunning achievement. Architecture for the Anthropocene. I canâ€™t wait to visit when construction is completed in 2020.

I think the American Institute of Architects (AIA) says it best: â€œDesigning and building resilient buildings is not a choice, itâ€™s an imperative.â€

Globally, buildings consume 35 percent of all energy and 60 percent of all generated electricity, much of which is, unfortunately, still produced by fossil fuels. According to the AIA, three-quarters of global carbon emissions come from just two percent of the Earthâ€™s land surface â€“ urban areas.

With two-thirds of global population expected to live in urban areas by 2050, the AIA nails it: â€œWe believe that the climate change battle will be won or lost in cities.â€

I am therefore optimistic that climate change and renewable energy will emerge as sub-themes at the 2018 biennale â€“ with or without specific direction from Biennale di Venezia. This has already happened in previous biennales: 2017, 2016, 2015 and 2014. For example, the most talked-about piece at the 2017 biennale was sculptor Lorenzo Quinnâ€˜s â€œSupportâ€ (see photo above), a nine-meter tall installation that cleverly symbolizes humanityâ€™s capacity to destroy the world and, simultaneously, to save it.

Perhaps this is the point of the biennaleâ€™s organizers: providing only a few broad thematic brushstrokes, effectively giving artists and architects free reign to express themselves. But this seems to me a lost opportunity, especially in the context ofÂ  climate change and urban sprawl.

Imagine the positive impact that large cultural events like the prestigious Biennale di Venezia could have if they encouraged all future pavilions and exhibits to address the critically important role that artists and architects, in collaboration with engineers, scientists and city planners, can and must play to reduce carbon emissions and increase resiliency of the built environment. The Land Art Generator Initiative (LAGI), which organizes a biennial international competition for renewable energy art and architecture, has already been doing this for 10 years.

I will end here with a must-read quote by Ned Cramer, Associate AIA and editor-in-chief of ARCHITECT:

â€œClimate change is the fundamental design problem of our time. Not style, not fees, not education, not community, not health, not justice. All other concerns, many of them profoundly important, are nonetheless ancillary. The threat climate change poses is existential, and buildings are hugely complicitâ€”even more so than that stock culprit, the automobile. As every architect should know, buildings consume some 40 percent of the energy in the U.S. annually, and they emit nearly half of the carbon dioxide (CO2), through greenfield development, cement production, and the burning of fossil fuels such as oil, gas, and coal. Because CO2 traps solar energy in the atmosphere, thereby heating the planet, it is the chief agent of climate change [PDF], making buildingsâ€”and by association, the architecture professionâ€”profoundly responsible.â€

After visiting the Biennale Architettura 2018, I will write a follow-up post here, which I hope is filled with bold examples of architectural insight and genius to address the most daunting problems facing humanity today. It is time for architects to take their rightful place at the center of global climate change movement.

addendum: Deadline for the LAGI 2018 Melbourne competition is 6th May 2018 at midnight GMT.

Joan SullivanÂ is a renewable energy photographer based in QuÃ©bec, Canada. Since 2009, Joan has focused her cameras (and more recently her drones) exclusively on solutions to climate change. She is convinced that the inevitable transition to a 100% clean energy economy will happen faster â€“Â and within our lifetimesÂ â€“ by creating positive images and stories that help us visualize and embrace what a post-carbon future will look like.Â  Joan collaborates frequently with filmmakers on documentary films that explore the human side of the energy transition. She is currently working on a photo book about the energy transition. Her renewable energy photos have been exhibited in group shows in Canada and the UK. You can find Joan on TwitterÂ andÂ Instagram.Â