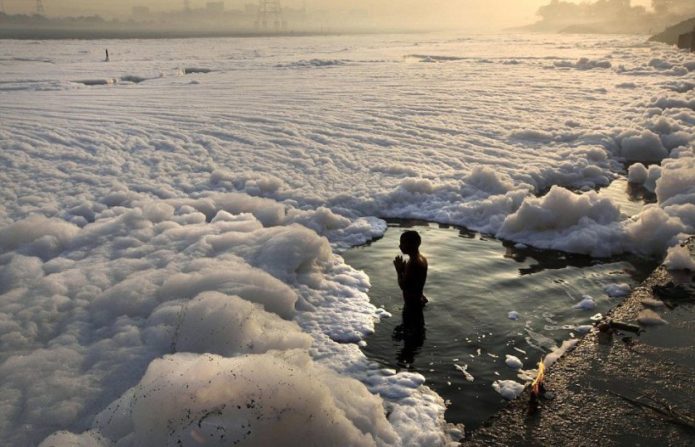 The third in a year-long series on artists who are making the topic of water a focus of their work and on the growing number of exhibitions, performances and publications that are popping up in museums, galleries and public spaces around the world with water as a theme.

I met Vibha Galhotra, a New Delhi-based conceptual artist, at a talk she gave recently in conjunction with Unfiltered: An Exhibition About Water, which is currently on view at the William Benton Museum of Art on the campus of the University of Connecticut.** The show’s themes include: “the power of water and the changing landscape; water pollution and biology; water scarcity; climate change; the physical properties of water; and the Connecticut River.” Vibha’s piece in the exhibition, a 10+ minute film entitled Manthan, as well as much of her work in recent years, confronts the critical condition of the Yamuna River, which flows through the city of Delhi and is a source of water for more than 70% of the population.

The Yamuna River, originating in the Himalayas, is one of the most polluted rivers in the world. Although relatively clean further upstream, in Delhi, India’s cultural and political capital, it contains highly toxic industrial and domestic waste, untreated sewage, animal carcasses and other dumped garbage. In her remarks, Vibha referred to the Yamuna as a “cesspool,” a “dead” entity. She bemoans the reality that despite the river’s exceptionally polluted condition, practicing Hindus continue to bathe in what they consider to be its sacred waters as a means of cleansing their sins.

In a 2014 series called Sediments, Vibha used the actual toxic black sludge from the Yamuna River as a medium for creating abstract, large scale paintings. She sees the series as a way of voicing the contradictions between the traditional spiritual holiness of the river and its reality as an unholy, dying body of water as well as the idiocy of officials who conduct religious rituals at the river rather than clean its waters.

Similarly, her series, Flow is also inspired by the river. Using thousands of ghungroos, small metallic bells worn by classical Indian and Pakistani dancers, sewn onto fabric, Vibha created two and three dimensional pieces that resemble topographical maps “of the river passing by the city I live in.” The ghungroos form a complex mosaic in lovely shades of  gold, copper and other earth tone colors that stand in stark contrast to the ecological disaster that the artist is addressing. She explained that she is “creating an organically sewn, aesthetic surface to invite the viewer to the clean and beautiful facade to talk about the chaos behind.”

Manthan, Vibha’s contribution to the Benton exhibition, is, as the label to the film suggests, an “homage to the river.” Alternating between aerial shots and close ups, Manthan takes the viewer on a haunting journey down the toxic Yamuna, revealing industrial structures that contribute to the pollution, garbage coated coasts, images of sludge that form abstract forms in acidic colors and waste pouring out of drainage pipes forming foam that moves through the water like icebergs. Eventually, four “fishermen” wearing black wetsuits appear poling slowly down the river. They fold a pure white length of fabric that stands in stark contrast to the black sludge as if to purify the dead water. The film concludes as the men dunk a white sheet into the water and pull it out to reveal its toxic, mucky surface.

At the conclusion of Vibha Golhatra’s talk, she summarized her goals as an artist whose work is imbued with social responsibility: “I am posing questions through these works. I am not answering them.”

(Top image: A Hindu man at prayer amidst the industrial foam of the Yamuna River. Courtesy of AP.)

**I have two mixed media paintings in the Unfiltered exhibition entitled, Rising Tides, #3 and Water Wars, #2.

Susan Hoffman Fishman is a painter, public artist, writer, and educator whose work has been exhibited in numerous museums and galleries throughout the U.S. Susan’s latest bodies of work focus on the threat of rising tides caused by climate change, the trillions of pieces of plastic in our oceans and the wars that are predicted to occur in the future over access to clean water. Susan is also the co-creator of two interactive public art projects: The Wave, which addresses our mutual need for and interdependence on water and Home, which calls attention to homelessness and the lack of affordable housing.