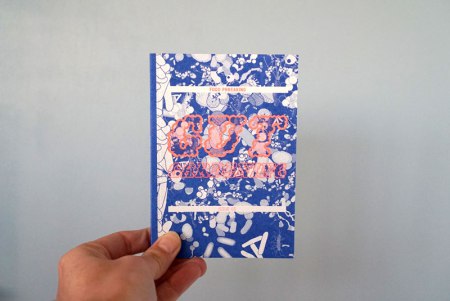 Ewan Davidson is a blogger and self-identified psychogeographer (riverofthings.wordpress.com). His recent wanderings have taken back into familiar territories, those of ecology, natural metaphors and causality, he first visited as a student thirty years ago. He is also really fond of lichens and birdwatching.

It is only about a decade since the microbiome became a thing. Fuzzy boundaried notions collect all kinds of aspirational, utopian fluff, and the microbiome – a paradigmatic concept of the cyber-age – has the capacity to multiply these as quickly as (aerobic) bacteria grow on a Petri dish.

The role of microbiologists is to culture the useful part of these into something that might grow and become valued. The Rowett Institute of Nutrition and Health in Aberdeen has been involved in this research effort and the artists/designers known as The Center for Genomic Gastronomy have been Leverhulme Artists in Residence involved in the dissemination of the stuff.

The most recent publication in their Food Phreaking series of pamphlets, Gut Gardening, reaches for a compromise between populist publicity, sober accounting and dis-illusion. Most writing about the microbiome oscillates between potential and entropy in this way. For example the story which most of us will have heard in some form concerns the microbial base for obesity. This is drawn from a research programme described at length in I Contain Multitudes (Yong 2016) where generations of lab mice have been grown in a sterile environment, gnotobiosis, and are used as receptacles of cultures of microbes from obese or normal humans. Fat gut microbes produced fat mice, which in turn produced the headlines about gut microflora creating obesity, which in turn received the ‘Overselling the Microbiome Award’, which has at least 38 former winners for extrapolations from interesting test results (others including cures for IBD, diabetes and mental illness, as well as jeremiads about the harm of antibiotics).

This particular replication keeps happening because the scientists had to move beyond the simple correlation of one thing with another, and see if there were links which might be predictable or causal. This has proved much more complicated – in the case of our mouse, food, genetics and the developmental stage all matter. The gut microbiome, when studied closely, stopped being one thing and became many.

To improve the chance of establishing causality in the lab, anaerobic chamber cultures of the various bacterial species are grown in separate wells. They are mixed by a robot into different recipes, which are then transplanted into the gnotobiotic mice. The conclusions drawn from extensive trials are that 11 bacterial species are involved in some way in promoting obesity (in mice, and perhaps humans) and two other species seem to inhibit. But only if certain other factors apply, and only, so far, under controlled conditions.
Meanwhile in the outside, more chaotic world (what the scientists I trained with used to call ‘the filed’, with heavily inverted commas) the Human Microbiome Project, collecting submitted poo samples, has established that there is no such thing as a typical US volunteer gut community. Nicola Twilley, blogger and gastrophile, writes in Gut Gardening,

‘It now seems our gut microbiome is not a single organ,that can function well or badly. Instead it is a series of negotiations and trade offs, in which distinctions between good and bad have been increasingly difficult to extract from the white noise generated by up to a thousand different microbial spp, all interacting with each other in ways that we mostly don’t yet understand.’

The Scottish biologist D’Arcy Thomson’s 80 year old view that ‘we have come to the edge of a world of which we have no experience and where all our preconceptions must be recast’ (1992) still seems apt.

Dr Wendy Russell, lead editor of Gut Gardening and a Senior Research Fellow at the Rowett, acknowledges that research into the microbiome creates a new set of challenges to scientific method (isolation, refinement, replication). In short the basic tools of instrumentalism are not effective in explaining or predicting the functions of microbial ecology. New forms of research which can deal with complexity might involve technologies like the anaerobic machine, but also strands of maths which can assess the relative contributions of parts of systems that can’t effectively be separated. And beyond those, new ways of thinking about causation.

It is not that utility can’t be found. One of the contributions to Gut Gardening is the story of Lactobacillus rhamnosus. Following observations that l. rhamnosus proliferate in a healthy vagina, Gregor Reid’s team cultured the GR-1 strain of this, and found it was linked to defence against Urinary Tract Infections and other types of immunity. Preparation and trials in yoghurt and capsule forms and have been developed commercially (sidestepping the restrictions involved in creating conventional medical products) and as part of a development project producing probiotic yoghurt in Tanzania. The efficacy comes from accepting the rough pragmatic tools of correlation and amelioration, without the poesis of understanding the nature of the thing and the process.

However there is another form of usefulness in new knowledge. The art work in Gut Gardening acknowledges this in background chaotic patterns of tangled and unfamiliar overlapping shapes with occasional highlighted (and even dayglo) squiggles. The publication gently lays down the challenge to its contributors to imagine and speculate.
One of the interesting speculations of the Center for PostNatural History is that the human gut flora, like our pets, will ‘reflect human desires and anxieties which influence them’. It’s a good trope, although so far most of us have been interested in the influences pulling the other way – that our bodies, lifestyles and consciousness are subtly directed by the growth and byproducts of our microbial partners/symbionts, through biofeedback loops between the flora, hormones, organ development and appetites.

Post natural and post human are spirallingly anthropocene ways of thinking about the world. For those of us whose interest in cultures is not mainly probiotic this is the great re-envisaging potential of the microbiome.

Jamie Lorimer’s jovial piece (2016), Gut Buddies about the related interest in re-infestation of humans with hookworms demonstrates the continual crossover between enthusiasts, scientists and entrepreneurs (sometimes the same figure in different guises) opening up an area of interaction with biota (or domestication if you will). What was once vermin is now a product or a pet. We should know that this happens – this replicates our human history. Are there new possibilities for envisaging being raised by the way we have to understand the microbiome..? Moulders and shapers need to understand things as material – as something with predictable usefulness. But time and again with the microbiome, there are ways in which our methodologies fails us. We retreat to scratch our head. The ways we come to understand the microbiome will have to challenge scientific paradigms too.

In a way which is less dystopian than the control metaphors of the yellow science press we are indeed being subtly influenced by our microbes.

Yong, Ed ( 2016) I Contain Multitudes – The Microbes Within us and a Grander view of Life.  New York: Ecco Press.