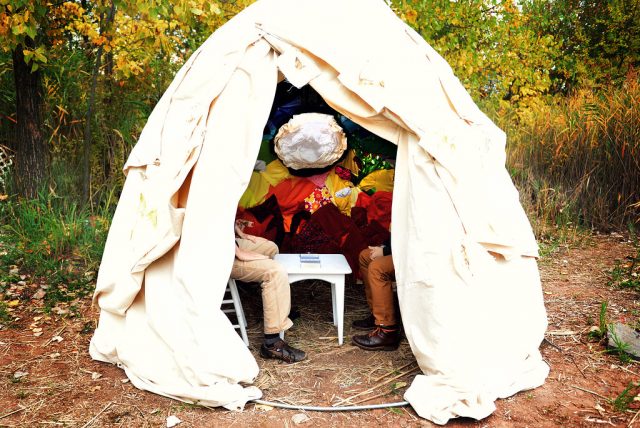 My inbox is flooded with petitions and calls to action. I’m calling and tweeting more than ever. These are amongst responses to the current political situation in twenty-first century America. Aside from anxiety-inducing news alerts and very tangible threats to our livelihoods at the hands of our national government, I catch glimpses of joy, ways to stay engaged, and reasons to remain hopeful.

During the first days of the Trump Administration, 350.org ran a Twitter campaign, tweeting up a storm of #ClimateFacts, just as the new President gag-ordered the EPA. I contributed a few tweets, as did my collaborators at Back To Work Collective. Within a few hours, #ClimateFacts was trending worldwide. Twitter is a rapidly moving medium, and while the flood of #ClimateFacts poured out on January 26, this particular “Twitter Storm” has past. Nevertheless, 350.org achieved a small virtual victory, in which the “master’s tool” was reclaimed by the people, and in a way, by the climate itself.

In the real world, something that has kept me afloat amidst horrifying news on the crumbling state of our democracy is the International Human Rights Art Festival, which I am assistant producing. This Festival, opening next week in New York City, brings together local, national, and international artists, activists, and community members around a weekend of arts events resonating human rights themes. The weekend also includes community-based events: happy hours for neighbors from across the city to commune, kvetch about the current state of affairs, and celebrate the arts; and a KidsFest, opening up the world of art activism to youth of all ages through hands-on art-making around socio-political issues.

On the climate front, the Festival features environmentally conscious events through an array of media. There will be two new theatre pieces on varying environmental themes: PLUTO (no longer a play) by eco-theatre collective Superhero Clubhouse, and UPROOT by yours truly. We’re screening Josh Fox’s climate change documentary, How to Let Go of the World and Love All the Things Climate Can’t Change, with a special introduction by the filmmakers. And throughout the weekend, artist James Leonard will give climate change divination readings in his Tent of Casually Observed Phenologies.

James’ Tent, fashioned beautifully from colorful second-hand clothes, is a unique performance, a one-on-one encounter, and a space for questioning and reflection. I asked James to describe the underpinnings of the Tent in his own terms, especially as he has been continuing his work in this particular political climate:

The Tent of Casually Observed Phenologies grew out of my own anxieties over ongoing ecological crises and my struggle to deal with impermanence. I have found that the divinatory practices I employ in my art give structure to deep contemplation, training the imagination to respond to the range of the possible futures before us. This contemplation, though at times painful, can provide calm, and amidst that calm can be found the clarity and strength to persist. In this way, I see my role as artist & activist as something of a spiritual M*A*S*H unit to the broader environmental movement.

My own work at the Festival, the first iteration of my play about the industrial food system, UPROOT, meditates on where our food comes from and how we – many of us in Western society – got to be disconnected from its source. Through anthropomorphized foods, I pose questions about the choices we make with regards to food – and what choices are made for us. The characters in UPROOT also encounter concepts of identity and agency. With these broader themes, I pursue a theatrical event that holds a time and space for every audience member to reflect on the world around them, and their place in it.

As I have been meditating on these ideas in my rehearsals, I was pointed to a piece in The Conversation: We need to think about redefining citizenship in the Anthropocene. Author Sam Solnick touches on the paradox of rising nationalism at the same time of rising sea levels (and rise in climate disasters). Solnick reconsiders borders and walls, proposing:

One way of negotiating the multifarious challenges of citizenship in the Anthropocene is to relinquish the fixation on ‘taking back control’ and recognise the radical challenges to our agency from forces not only beyond our borders but beyond our species. In doing so, we can create informed citizens who recognise that they participate in citizenship on a changing planet that, whatever the science-warping mouthpieces of Murdoch and the Koch Brothers proclaim, will not be fooled into altering its course by alternative facts.

The way that Solnick describes agency, and offers space to recognize these borderless forces, resonates with my characters’ relationships to the world they occupy.

These past months have pushed me – and my inbox – to maintain a balance of work, play, and resistance. The events coming to the Festival have helped me imagine a way for these elements of my life to come together. Considering the personal and political spaces that will be created by the participating artists – the spaces for art, activism, and joy – I get the sense that this weekend will be a form of resistance in and of itself. As history has taught, the dark forces of the Trump Administration will feed off of fear, complacency, even sadness. The events of the Festival are so antithetical to such energies, highlighting instead positive forces that transcend any border or wall.

Take Action
Want to block fossil-driven projects like the Keystone XL and Dakota Access Pipelines, but can’t travel to the front lines? Stay up-to-date on ways to resist from where you are by signing up for 350.org’s Pledge of Pipeline Resistance.

Want to engage in peaceful public assembly and protest around climate issues? Consider the March for Science on April 22 (Earth Day) and the People’s Climate March on April 29.