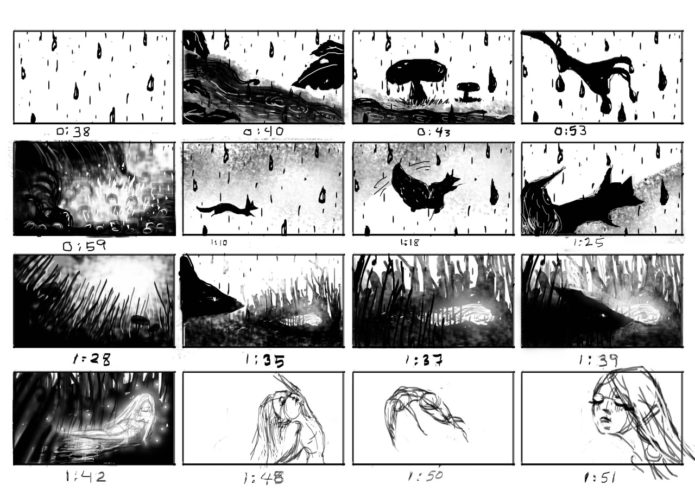 Feature: Storyboard from the animated film pilot for “Next to Now,” by Annette Mohr.

Marte Røyeng is a singer/songwriter based in Oslo, Norway. I met her on a trip to Norway a few years ago where, at the time, she had just finished creating a musical with at-risk youth that dealt with aspects climate change. I have been following her work from a distance since then, always delighted to listen to her haunting and richly textured songs. A gifted musician who plays mandolin, piano, guitar and banjo, Marte has performed in concert venues, cafés and smaller festivals in Oslo and as far north as Lofoten. Here, she tells us what drives her, why urgency must be accompanied with compassion, and why embracing the vulnerability of others is a source of hope.

I often find inspiration in descriptions of a life that is different and more extreme than mine. When I feel like a stranger to what I am listening to, reading, or seeing, I feel the need to respond, and that response is usually a piece of music, or a song. For a while now I have been really drawn to dystopian and post-apocalyptic fiction and films. I think what inspires me in these stories is that they often contain some kind of search for compassion. Cormac McCarthy’s The Road is the strongest example I know of that kind of story. It is beautiful and horrible, and has become a point of reference for me. I want to bring some of that sense of human strength and vulnerability into what I do.

What can music do for climate change that other art forms cannot?

Music has a lot in common with other art forms, of course, but one defining feature is that it happens in time. It gives you something to react to, and then moves on. So what lingers, what resonates, what you find interesting or important is deeply personal. Music has many layers and it interacts with a complex mix of “materials” inside your mind: emotions, knowledge, memory, self-image, and culture. You pick up the song’s message, but you bring a lot of yourself, a lot of your own “material” to it. Music can be abstract and very open. In terms of climate change, it gives the opportunity to have a personal experience. I’ve written a song called “While You Can” which could bring to mind images of islands slowly being washed away by rising oceans. Or it could just as well be heard as a description of a relationship withering away – or even carry both meanings at the same time.

I really appreciate how music offers a mild and non-judgmental space for people to explore their own emotions. I like it when I listen to music and think “this is so important, I need to remember this.” And it is in part the music itself and in part my own personal “material” that brings out this sense of importance. The music and art project “Next to Now” is all about that. The words I sing can be direct and desperate, but the music softens them, or adds a question mark to them. When I make music and write lyrics about climate change, I try to balance the sense of urgency with the understanding that it is difficult and takes time. I don’t want to point fingers too much. My hope is that the songs become more open to many different listeners that way.

I know you often work with kids… Does your work with them influence your music?

The last time I worked with kids was on a theatre project called Black Sea / White Foam: The Little Mermaid, a collaboration between Scenelusa, America-based Experimental Theater Lab and Myers-Bowman Productions. Five teenage girls created and performed several versions of the fairy tale The Little Mermaid using experimental theatre techniques. Incorporating their thoughts on climate change into the performance was part of the project. In addition to making music for the pieces based on recordings of the girls’ own voices, my role was to give a few talks during rehearsals about different aspects of climate change. In these talks, I tried to stay close to the teenagers’ lives. I avoided exploring the issues from a too specific or political point of view, trying instead to give the girls a chance to check in on their own feelings and thoughts about climate change. We talked about things like responsibility, perception of time, and the relationship between us and nature. Listening to the discussions that followed the talks, and watching the performance itself (which was very emotional), I was struck by the blunt seriousness with which the teenagers treated the issue. It was sobering. I even felt a bit guilty as if I’m not serious enough about climate change myself. It still feels far away and unreal. But to them, it’s all very true. My impression is that young people look at their future with more stark realism than many adults do. Even though I’m less than ten years their senior, I haven’t grown up in the same way they have, listening to news that are becoming more and more dire.

What is the single most important thing artists can do to address climate change?

Artists are in a position to create works that act as reminders of something we perhaps already know: Every human being is part of a network that can make big things happen. Artists are really good at making hidden or forgotten connections visible, and at helping us overcome our feeling of being anonymous or insignificant by presenting alternative ways to view ourselves in the middle of our ongoing stories. They challenge our sense of responsibility. They hear and respond to our sense of being useless, of disappearing in the crowd, of being drowned out by stronger voices.

Speaking of making connections, I really support the idea that there is a lot of potential in collaborating with researchers and others working outside the art world. I am inspired by people like Heike Vester, who I met this summer in Lofoten, in Northern Norway. Heike is a biologist and the founder of a fantastic project called Ocean Sounds. She studies the vocal communication of whales and dolphins, using that knowledge to protect the marine ecosystem from harmful human impacts. Ocean Sounds lists Art Projects as one of their project aims, with the explanation that art can help bridge the gap between “dry” science and its audience and create deeper understanding. I admire Heike’s approach. Maybe artists need to be more actively on the lookout for collaboration opportunities?

Climate change is about equality and fairness and everyone having the right to a good life on a healthy planet. The fact that we can consciously choose between connection to, and rejection of, others gives me hope. It means that we can choose to care about people beyond those in our closest networks. It is so good to see growing movements of people who believe in the importance of looking after each other, not just one’s own interests. I am hopeful that more and more people will choose to embrace the vulnerability of others as well as their own.