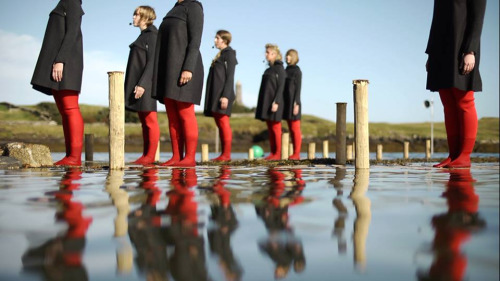 Hannah Tuulikki, Away with the Birds, 2014, Film still, Daniel Warren

Last summer several years’ worth of development culminated in the performances of Away with the birds, written and performed by Hanna Tuulikki and produced by Suzy Glass.

Hanna Tuulikki’s Air falbh leis na h-eòin is a body of work exploring the mimesis of birds in Gaelic song.

Hanna’s vocal composition, Guth an Eòin | Voice of the Bird is the heart of the project. Written for a female vocal ensemble, it reinterprets archival material, fragmenting and re-weaving extracts of Gaelic songs into an extended soundscape. The music emerges from, and responds to, island landscapes and lives. It explores the delicate equilibrium of Hebridean life, the co-existence of tradition and innovation, and suggests the ever-present inter-relationship between bird, human, and ecology.

‘The piece is made from weaving together fragments of traditional songs and poems that imitate or emulate birdsong’ Tuulikki explains. ‘Each of the five movements represents a different habitat and bird community – wader, sea-bird, wildfowl, corvid, and cuckoo. In August we will perform the concert in the historic harbour of the beautiful Isle of Canna, where the music reverberates with the bird-calls and the ebb of the tide. The setting is so important to the piece. The Small Isles are a magical place and, to me, the performance begins as soon as people climb on-board the ferry-boat to make the crossing: the richness of the experience is people sharing a journey.’

Away with the Birds was conceived for and in relation to the Isle of Canna – its ecology, birdlife, history and community. The last custodians of the island, John Lorne Campbell and Margaret Fay Shaw, were renowned folklorists and ethnomusicologists whose extraordinary collection of Gaelic material is housed in Canna House. Steeped in the Gaelic tradition, their hospitality was famous and their home became a hive of creativity, welcoming artists, musicians, scientists and writers from across the world.

Access the interactive score with access to background material, audio and video clips as well as images here.

In this new version of Air falbh leis na h-eòin you become the navigator, steering your own way through Tuulikki’s score. Within its expansive sweep, sound, music, and movement are translated into gesture and precise notation. Words and vocables – sounds without meaning – represent the shapes of individual birds, flocks, skeins, waves and islands, as well as more abstracted forms, suggestive of motion or topography.

You can explore the entire composition in your own time, taking your own course. You can experience the texture of ecology, survey landscape and seascape, immerse yourself in the film, and read detailed notes on the source songs, poems, and birds. This is a prismatic experience that tunes us into a sonic continuum that reaches into the “more-than-human” world.