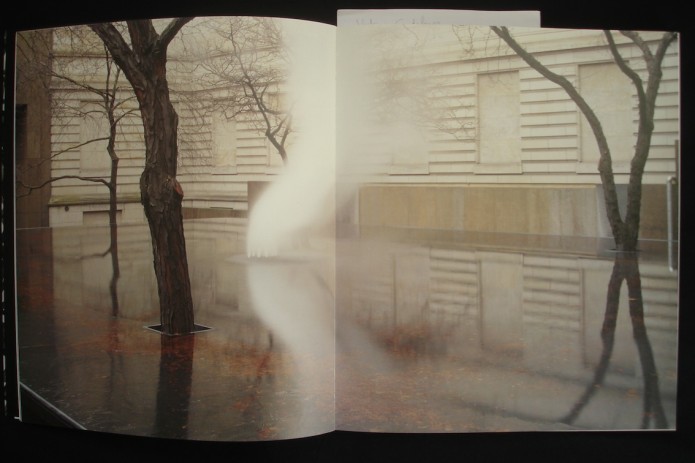 Judy Spark: Olafur Eliasson’s work seems built around this notion of a ‘gap’ as we catch ourselves in the shift between responding to what it seems we are faced with and our recognition of this response. Although I have only ever seen it in books, I love this piece; it resembles some sort of natural geyser – it reminds me of an exquisite Hokusai landscape but it’s constructed around the flue outlet of the Museum’s heating system. You’d said that the ‘spectacle’ of his work had sometimes made you uncomfortable, and indeed, I appreciate what you mean by this, but I’ve been persisting recently with trying to unearth a bit more about what he does. The work plays on our tendency to ‘name’ things as we momentarily encounter the thing we are viewing as ‘real’. For me, it’s as if this thing of the spectacle; the technological sublimity he creates, ends up coming back on itself to ‘the things themselves’; as we remember that what we are seeing is an artwork, a ‘construction’ and not a ‘real’ thing, we are made to reflect on why we were not at first moved by the original – had forgotten how to see it. His work does seem to effect a shift in perception of our natural surroundings. Perhaps his intentions may turn out to be a little less ‘worthy’ than that but we are being invited to make what we make of it (every title has ‘Your’ at the beginning) or at least encouraged to recognise that this is what we are doing. It almost hurts that we might, for instance, have lain basking in wonder in Tate Modern (beneath the Weather Project) when we have forgotten how to be fully aware of the full implications of the sun itself! Eliasson’s relationship to phenomenology is well evidenced, specifically in the work of writer Daniel Birnbaum. As I see it, Eliasson’s work creates a ‘gap’, a space for wonder. I think a lot about this potential of the artwork as a space for wonder.

Samantha Clark: Yes, wonder as a momentary suspension of discursive thought, a pause or space we can enter. Wonder comes in for criticism, seen as a privilege of the leisured classes wandering awestruck around the mountains while local people are just busy getting on with their work, or as some kind of brainless, slack-jawed paralysis. It’s been used that way historically, by the Church for example, to suppress curious and possibly heretical questioning. But I’m interested in some of the ethical arguments for wonder and enchantment presented by the likes of Suzi Gablik and Jane Bennett, Ronald Hepburn too. What a poem, or an artwork, or a piece of music can convey, is that sense of suspension, sharing a moment of wonder that comes like an unexpected gift, a moment with a particular weight to it, that leaves us in a slightly different shape. Bennett argues that this enchantment brings a gratitude and generosity to our ethical relations, that isn’t about obligation or duty, but about love. Art works can open that space up for us. And I think that ideas can do that too. So I don’t draw a line between academic and creative work in that regard.

Bennett argues that ‘wonder is not a naive escape from politics but marks the vitality and agency of a world that sometimes bestows the gift of joy to humans, a gift that can be translated into ethical generosity’ (2001: 175). It’s not about going about in a constant dwam, but about those moments of wonder that punctuate the everyday. She equates wonder with love for the world, a love that engenders care. Like Hepburn, she thinks we should cultivate the capacity for wonder, and embrace those moments of enchantment which act as a ‘shot in the arm, a fleeting return to childlike excitement about life’ (5). Bennett suggests that the delight and joy of wonder spills its good humour over into our ethical life, to nourish an ethics based on love for the world rather than on duty and obligation, ‘rendering its judgments more generous and its claims less dogmatic’ (10). Hepburn sees an affinity between the non-exploitative, non-utilitarian attitude of wonder and ‘attitudes that seek to affirm and respect other-being’ (1984: 145). Wonder keeps our attention in and on things in the world, poignantly realising their potentiality and fragility. The attitude of wonder is one which, Hepburn thinks, readily gives rise to compassion. ‘From a wondering recognition of forms of value proper to other beings,’ he suggests, ‘and a refusal to see them simply in terms of one’s own utility-purposes, there is only a short step to humility.’ (1984: 146)
References:

Gablick, S. (1993) The Re-enchantment of Art, London: Thames and Hudson