Judy Spark: This work, consisting of a series of archive prints and a set of hand-made radios constructed from odds and ends such as copper wire, pencil leads and safety pins, was made for Cupar Visual Arts Festival in 2009. I had come across some references to a little known aspect of the town, which was that it played a part in the development of transatlantic telephony in the late 1920s. As a result of this work I later, in 2011, undertook a short residency in Cupar, the focus of which was to explore this matter in more depth. It transpires that the town and the area around it, sits in a sort of natural dip in the land that is said to be especially disposed towards the reception of LW radio signals. I was particularly interested in a letter that I came across in the BT Archive in London, written by a Mr Jacks of Cupar in 1928 to a Mr J. D. Taylor of the Institute of Electrical Engineers in receipt of a cheque he had been issued in exchange for allowing the positioning of telephone lines across his land. He states:

“I know nothing of wireless initiatives, but judging from the results we have from continental stations, I think our quiet, damp, elevated hollow must have special facilities for reception.”

And there is some scientific grounding for this theory.

I have a long-standing interest in what may be present around us, but unseen, unperceived, or at least not fully. Radio communications, and their relation to natural phenomena are for me therefore, highly intriguing. I have recently made an exploration of this relationship through writing, in a paper entitled The Environing Air. The paper explores the intertwining of the natural and the technological through the case study of a particular communications installation in Assynt in the far north west of Scotland. A phenomenological description – phenomenology being the science of direct experience – of the installation is made in service of this aim but also by drawing on elements of physics, that are perhaps less easy to experience directly. This combined approach is considered as a legitimate phenomenological ‘method’, one very well articulated by the philosopher Anthony Steinbock.

Link to PDF, extract from The Environing Air

Samantha Clark: It’s fascinating to discover the links between our practices, because the notion of ‘The Subtle Ether’ has been an interest in my own work for a long time; an ongoing preoccupation with gaps, absences, distance, longing, nothing, the hidden or invisible, and the notion of ‘between-ness’, the ether as something postulated to fill the gaps between everything, explaining how light travels. What is between things? What is ‘no-thing’? Ask that question and another follows: What is a ‘thing?.’ And that’s when everything starts to get very intriguing. The work is really a way to look at these questions from all angles, creatively, visually, philosophically, lyrically. I was drawn towards the explorations of these questions that emerge in continental philosophy, especially in the tradition of phenomenology, and the insights that approach gives into role of absence in perception. There seem to be parallels between phenomenology and aspects of Buddhist philosophy, in which ‘things’ are understood as not having ‘own-being’, that is not existing from their ‘own side’, but presenting themselves as confluences, more or less momentary, of millions upon millions of causes and conditions, including the observer. So the object becomes less of a static ‘thing’ and more like a standing wave, what is termed by Husserl a ‘pole of identity’ within this flow of percepts. This way of seeing brings everything alive; things and the stuff between things all start to get involved. It strikes me as an intrinsically ecological way of seeing.

So, I have come from a visual art practice into philosophy and ‘academic’ writing, and now am working on a PhD on Creative Writing, still unpacking this notion of ‘the Subtle Ether’, using this as a kind of metaphorical hook on which to hang a related set of ideas.

I had been preoccupied with these ideas for a long time but the personal relevance only really came home to me after my father died and I began to clear his things. He worked for 45 years as a telecoms engineer for the BBC, from wartime radio to the early days of television, retiring just at the point when digital technology was coming in. After he retired he carried on as an enthusiastic Radio HAM and maker of remote control models. I came across photographs (above) recently, which I think I took, on a family holiday to Torridon. We had hiked up the hill where my Dad assembled this yagi antenna to see what 2 metre radio signals might be propagating through that landscape. The two metre band is a portion of the VHF radio spectrum allocated for amateur use. Its signal is usually fairly local, a few miles or so, unless bounced onwards by a repeater station. But sometimes the signals can travel huge distances. Occasionally, signal bending caused by changes in the ionosphere caused by sunspots, metors or auroras can allow 2 metre signals to carry hundreds or even thousands of miles. With enough power behind it, a signal can be bounced from the face of the moon. A person transmitting through the earth’s atmosphere to the moon may hear the end of his own transmission returning, an echo crossing a wide canyon. To me, as a kid, this kind of expedition didn’t feel any more technological than the fishing trips we also used to go on – picking a likely spot, keeping an eye on weather, assembling the fishing rod or home-made antenna, waiting, watching, hopefully catching something that had been ‘swimming’ in ether/water. Of course, now we know that electromagnetic radiation from man-made sources is suspected of affecting bees, even some ‘electrosensitive’ humans. So it’s not completely innocent either. Mind you, neither is fishing. 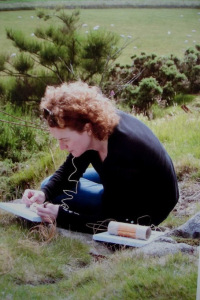 Judy Spark on Drumcarrow Hill, Cupar testing the reception of her handmade radios.

I find the ‘ether’ such an interesting nothing-thing because it really is ‘between-ness’ – it oscillates between natural and technological, between nothing and something, rational and irrational, science and poetry, distance and intimate connection, and it’s also something to do with human relationships, in the silence and (mis)communication within families. It’s a word that is a constant shapeshifter, reflecting our cultural preoccupations and scientific ideas right back at us. It gave birth to the science of electricity and magnetism, and yet also Spiritualism and Mesmerism. It gets debunked as one thing, ‘the luminiferous ether’, and keeps coming back as something else, dark energy perhaps, or the Higgs Field.
Judy Spark on Drumcarrow Hill, Cupar testing the reception of her handmade radios.

Spark, J. “The Environing Air: A Meditation on Communications Installations in Natural Environments” in PhaenEx: Journal of Existential and Phenomenological Theory and Culture
Vol 8, No1 (2013) PP 185 – 207.