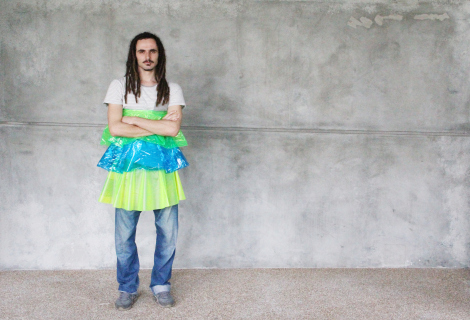 The Aquatutu. An inflatable suit to be worn in places that often flood.

Catherine Young is a Filipina artist-scientist-designer-writer-explorer working on human perception and the environment. How did she earn the right to claim such a beautiful, multidisciplinary, hyphenated title, you might ask? By receiving a degree in molecular biology and biotechnology from Manila, fine art education from Barcelona, and an MFA in Interaction Design from the School of Visual Arts in New York. Smart enough for you?

Catherine is currently working on something intriguing – The Apocalypse Project – that is just as multidisciplinary as her hyphenated self, and includes the wonderful series Climate Change Couture: Haute Fashion for a Hotter Planet. It is not fashion’s only foray in the world of climate change. Recently, Francesco Fiondella and Rebecca Fowler created Climate Models, a 2014 calendar featuring climate scientists in high fashion gear against backdrops illustrating their research interests. But Climate Change Couture is concerned with another kind of fashion: What we will wear when some of the scenarios of the current climate models (the computer kinds, not the flesh kinds) become reality.

What are the different components of The Apocalypse Project?

I used to work as a journalist, so interviewing people is a big part of my practice. The first thing I did was to hold a series of Apocalypse Workshops, where I asked participants to draw their answers to the questions, “What is your apocalypse?” “What superpower would you like to have to navigate through your apocalypse?” and “What would you wear to your apocalypse?” It made me understand how people (at least those in Singapore) viewed climate change, which is an issue with a large number of opinions.

I created the series Climate Change Couture: Haute Fashion for a Hotter Planet when I realized that the question on clothing resonated with participants the most — they found it an engaging question, whether they liked to draw or not. Climate Change Couture asks the question, “What will you wear to the future we create?” I designed the clothes based on the research of the Singapore-ETH Future Cities Laboratory, who collaborated with me during my residency. I think this series really resonated with people, and there is a diversity of environmental conditions all over the world which gives me ideas for a lot more designs.

I also held a project with students from Tembusu College, National University of Singapore called Earth vs Humans: The Court Trial. There I asked the question, “What happens if Planet Earth sues us for environmental misdemeanors?” The students, who took a class in climate change and whose professors helped me refine the project, wrote the script and assembled their cast, and we filmed it in their reading room.

I think there are many other ways to look at climate change apart from workshops, fashion, photography, and theater. I look forward to creating more projects under The Apocalypse Project platform. I am currently expanding the project in the Philippines, my home country and one that was severely impacted by Typhoon Haiyan last year.

Can you describe your collaboration with Singapore-ETH Future Cities Laboratory? How did you “translate” scientific research into design? What was your process?

My work is usually interactive and my earlier work had a lot to do with human perception. When I did a residency at the National Art Studio of Korea, I did a project that involved hiking all the mountains of Seoul. There, I saw firsthand the effects of human activity on the environment. At that time, I kept running into climate change in my investigations, and this led me to being a part of the 2013 Art Science Residency Programme, in partnership with ArtScience Museum at Marina Bay Sands, Tembusu College National University of Singapore, and Singapore-ETH Future Cities Laboratory.

I was essentially an artist in the lab. I looked at their research and saw opportunities to turn them into narratives that laymen can understand and care about using the medium of fashion. I think what makes the public shy away from science is its perceived inaccessibility and dryness. But I saw ways to turn science into stories that can engage people. Once I designed the clothes, I asked the researchers to critique them so that the final clothes would be solidly grounded in science. I see the project as one of speculative fiction, as opposed to science fiction — there are no zombies in this apocalypse, for example.

I really like this process of working with scientists, as I do have a science background. One of the most fun parts of the project was getting the researchers to model the clothes, which I don’t think people expect scientists to do. They got really into it and their artistic sides came out. I believe all of us are born artists and scientists — we are all curious and have the capacity to translate this into creative and innovative things.

What are people’s reactions to your Climate Change Couture series?

They found it to have a mix of seriousness and humor. The stories that go with the clothes are also a bit tongue-in-cheek. I think they saw climate change in a different light — it certainly deviated from the usual photos of polar bears. As an interaction designer, I believe in a focus on people, and that this will make an audience find the work relatable and relevant. When I present the work, I also invite the audience to wear the clothes, and this allows them to put themselves in the stories I created. The fun and interactivity of the project was a strategy to make them interested and engaged, and hopefully, make the issue of climate change important in their own lives beyond seeing the project in the gallery or online.

What do you think is the single most important thing artists can do to address the problem of climate change?

Artists can be the emotional hook in the problem about climate change. I think people in general are weary of being told that we are a liability to the planet, that there is no hope. I like to take a more empowering stance in the climate change conversation so that people will be spurred to action.

I have hope in the creative powers of humanity. We got ourselves into this, we can get ourselves out. We don’t have much of a choice, do we? 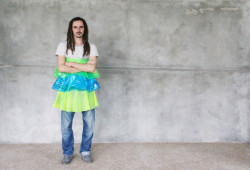 Artists and Climate Change is a blog by playwright Chantal Bilodeau that tracks artistic responses from all disciplines to the problem of climate change. It is both a study about what is being done, and a resource for anyone interested in the subject. Art has the power to reframe the conversation about our environmental crisis so it is inclusive, constructive, and conducive to action. Art can, and should, shape our values and behavior so we are better equipped to face the formidable challenge in front of us.