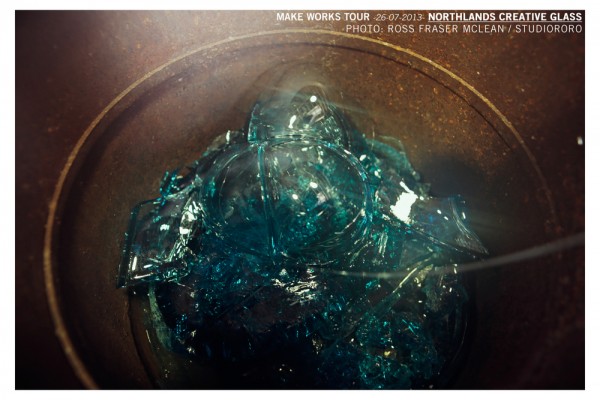 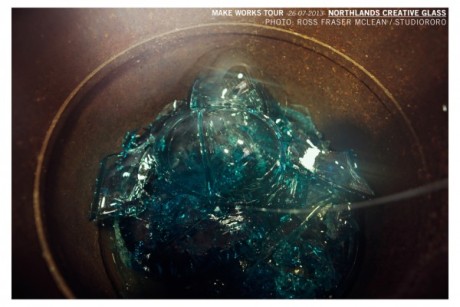 On 16th December Creative Carbon Scotland met for the third in a series of Green Teas(e) which bring together artists, arts organisations and people working in sustainability in Glasgow for tea, biscuits and discussion, with the view to sewing together previously disconnected projects and initiatives in the city. Green Teas(e) aims to give all sides of the group a new perspective on what others are doing and enable them to work together more effectively towards building a more sustainable cultural sector in Glasgow which might in turn influence a more sustainable city and vice versa.

This time round a group of twenty people gathered in the Mackintosh Building at Glasgow School of Art with an excitingly wide range of backgrounds and expertise to spur on discussion. The invited speaker, Fi Scott, Founder and Design Director of Make Works set the tone with a quick introduction to what they have been up to over the past year. Make Works’ mission is to ‘make it easier for creative professionals to produce high quality work locally’ in Scotland. Earlier this year they embarked upon a 3000 mile tour, mapping the suppliers, trades and manufactures working in Scotland for the Make Works Directory which will make it simple for artists and designers to source factories, fabricators, workshops and facilities digitally.

With the first two events providing more general introductions to Green Teas(e), Creative Carbon Scotland wanted to use this third session to flesh out some of the components and characteristics that might make up a sustainable Glasgow and cultural sector. Make Works’ emphasis on building new links between Scottish artists and designers and manufacturers, making visible previously hidden possibilities for them to produce work more locally, thus potentially contributing to the sustainability of the product, was a good starting point for discussion.

So what might a sustainable Glasgow and cultural sector look like? We asked the group what sustainability meant to them, in their personal and working contexts. Ben, Director of CCS, started us off with the ‘triple bottom line’ of environmental, economic and social sustainability encompassed by a wider circle which can be understood within any number of frameworks including ‘culture’, ‘world view’, ‘values’ or ‘politics’.

How do these feed into imagining a more sustainable city? More space for ‘thinking’ was one characteristic identified by the group. Chris Fremantle, independent producer and researcher, amongst others spoke about the pressure for cities such as Glasgow to constantly reinvent itself in order to maintain its position as an internationally competitive and appealing city to travel to or invest in. Chris gave the example of the plans for the new Clyde-wide Fastlink bus in Glasgow which would threaten the running of Govan Fair which requires a day-long closure of part of the bus route. Councils and organisations such as Glasgow Life face a huge challenge in keeping  up with the pressures to deliver ‘new’, ‘bigger’ and better’ events and programmes on increasingly tight budgets and staff time.

A ‘slower’ culture which values greater capacity for transparency in decision making as well as time to reflect, critique and make the most of what local resources and activities are already available was agreed upon as something which is currently lacking in Glasgow’s cultural landscape. This might in turn put greater emphasis on longer-term planning. Kenneth Osborne, financial director of the RSNO, spoke about their new building currently under construction which is estimated as functioning for only 60 years. How might we better approach such infrastructural changes so as to remove the financial driver as the over-riding position? A more locally driven engagement with city planning was one suggestion from architect Andy McAvoy, founder of Edo Architecture.

Bringing the group full circle, we talked about grappling with the complexities of achieving triple bottom line sustainability. Fi Scott highlighted the many contradictions Make Works were faced with when learning about the processes of local production in Scotland. How does one value the financial sustainability of a rural community which itself is maintained through the importation and exportation of particular materials and products around the world? To Fi one of the most consistent forms of sustainability she has encountered is that of jobs available to more isolated settlements through the presence of local factories and manufacturers. Amongst the group there was the feeling that a first step towards a more sustainable city would be strong leadership which acknowledges these tricky trade-offs that we all face.

For the next meeting Creative Carbon Scotland will be back-casting from a sustainable Glasgow and cultural sector in 2020 to discuss how we might get there.