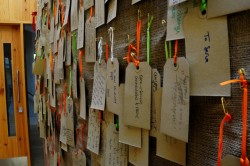 Fern Smith and Rhodri Thomas co-founders of Emergence  will facilitate a participatory inquiry into the role of the arts and artists as change-makers. World Café is an open and informal technique which uses the collective wisdom of groups to address a number of over-arching questions of relevance to the people present in the room.

The questions will be related to the people and projects we have individually encountered which inspire us to create a more sustainable practice in our life and work. This will be an invaluable opportunity to meet and share with other designers, theatre makers, producing and receiving houses and to follow a line of enquiry in an open, honest and structured manner.

The World Café methodology is a simple, effective, and flexible format for hosting large group dialogue.

The World café will be preceded by an introduction to the work of Emergence, the ideas which have inspired it and it’s impact to date on the arts scene in Wales and beyond.

Forty-nine theatre buildings across the UK are at real risk of being lost unless owners recognise they are responsible for community assets and work with trusts and local communities to secure their future, says The Theatres Trust.

Publishing its 2012 Theatre Buildings At Risk Register (TBAR) today, changes since 2011 highlight how a lack of care and investment leaves theatres particularly vulnerable to neglect whilst opportunities to harness the social and cultural value of theatres are being lost. It also shows how local champions, with the support of councils, grant making trusts and Lottery distributors are providing a new lease of life for theatres at risk.

The passing of the Localism Act in November 2011 and its emphasis on social well-being means local authorities now have to prepare lists of assets of community value, which include cultural interests such as theatres. The Trust’s hope is that this will encourage more owners of theatres at risk to realise that their theatres are assets – for the community and the country.

Mhora Samuel, Director of The Theatres Trust said, “There’s good news that overall the number of buildings on our Theatre Buildings At Risk Register has come down from 56 last year to 49 this year. And we’re pleased some have found the funds and support they so desperately needed, such as Wilton’s and the Gaiety in Ayr. However we’ve also lost some important venues and I’m very concerned about the future of the 17 theatres we’ve added to the Register including the Theatre Royal in Margate, Darlington Arts Centre and Croydon Warehouse.”

Twenty-four theatres have been removed from the 2011 Register including the Grade II* Wilton’s Music Hall in London and State Cinema in Grays, the Category B Ayr Gaiety in Scotland and the unlisted Conwy Civic Hall in Wales. Wilton’s has received funds from SITA Trust and the Heritage Lottery Fund which mean the capital works needed to secure the building’s future can now proceed. The State, Grays, received planning permission for a mixed use leisure and retail development in January this year. Ciwb Conwy Cube, the Community Interest Company  formed to take on the Conwy Civic Hall has been able to take over the running of the venue with some funding from its local council and it has reopened. And the Ayr Gaiety has secured vital funding from the Scottish Government and South Ayrshire Council to enable it to appoint a development officer, undertake an initial programme of capital works, and reopen later this year.

However, some of those lost from the 2011 Register have been demolished including the Waltham Forest Theatre in Lloyd Park (demolished August 2011); lost through change of use, including the Grade II Bedford Civic; or have been granted Listed Building Consent for demolition such as the Brighton Astoria.

Though not listed, Darlington Arts Centre, the Precinct Theatre, Islington, and Croydon Warehouse have been added to the 2012 Register, as redevelopment plans are affecting the provision of their replacement. Darlington Borough Council closed the Arts Centre in 2012 and plans to develop a new arts centre are yet to be finalised. The Precinct Theatre in Islington is yet to find a new home as a result of the redevelopment of the Packington Estate, and it is unclear what impact the loss of the Croydon Warehouse, which went into receivership earlier this year, will have for its planned replacement.

Whilst the Trust welcomes the new Y Ffwrnes (The Furnace) in Llaneli, Theatr Elli is due to close in July and its future is uncertain.  The new Merthyr Tydfil Town Hall redevelopment in association with Chapter Arts in Cardiff is also welcome, however it highlights the plight of the existing Theatre Royal, another asset for Merthyr.

The 2012 Theatre Buildings at Risk Register can be searched online.  More information on each theatre is provided through a link to the Trust’s online Theatres Database, which includes around 2,000 existing theatre buildings.  Each of the top entries has a downloadable information sheet. We are in for a season of civil disobedience. The Save Vestas campaign has gone national.Kingsnorth rumbles on, as does the Heathrow protest – which is likely to be the focus of the next Climate Camp at the end of August. Next month also sees Wales‘  and Scotland’s first Climate Camps. As COP15 focusses minds, there are even plans to disrupt the Copenhagen meeting.

A generation of jobless students will now swell numbers. But should those less used to participating in civil action also be getting stuck in?

In a recent newsletter [PDF 147KB], climate scientist/activist James Hansen concludes with a short section titled “Civil Resistance: Is the Sundance Kid a Criminal?”, suggesting the urgent need for what Gandhi called “civil resistance” rather than “civil disobedience”, especially directed towards companies who are guilty of passing the bill for carbon clean up to future generations. Even though his choice of gun-slinging Western hero rather shows which era he’s coming from, I guess he’s qualified to talk, because James Hansen himself was arrested alongside Daryl Hannah last month for his part in the West Virginia coal mining protests.

The excellent climate science blogger Jo Abbess has just raised his arrest in a post which argues that such action by scientists is vital because, as George Marshall of the New Scientisthas been saying, the public as a whole are not changing their behaviour in the way that those scientists know they should be .

This argument implies that scientists, as the people who really understand the bottom line, are now ethically bound to start to do more than produce data. They must join with scientists like Hansen. But if scientists remain hesitant to get start linking arms and chaining themselves to fences, Hansen’s own reputation as a leading climate scientist is an example of why. The man warned Congress back in 1988 about the perils of global warming has been under assault ever since he turned activist. Despite his role as a leading scientist and head of the NASA Gordon Institute for Space Studies, his name has been dragged through the mud by global warming sceptics. His arrest last month prompted the New York Times headline “Does NASA’s James Hansen Still Matter?”

What are the responsibilities of those who know to act? And what are the consequences if they do?