We’ve arrive back in the apartment after our second day in Copenhagen. I will refrain from saying we’re here for Cop15, because, while I’m interested in what’s going on in there, I’m really here to see the creative responses collected in this place at this time. That isn’t to say we didn’t go to the Bella Center, we did, but it’s not our primary goal.

I had the opportunity to check in with Martin Rosengaard of Wooloo.org while Miranda was delayed in London, as well as get a very helpful and personal tour of the city on bike by our host (and sterling scenographer) Sara Vilslev, a friend from the 2007 Prague Quadrennial.

On Sunday we headed to the Bright Green Expo at the Forum. It is the concurrent trade show for green tech during COP15. There was a promise of the inclusion of cultural programming, so it seemed like a good place to start. The Cultural programming really consisted of a DJ/VJ set for about an hour by CPH:DOX remixing Cities on Speed. We moved on pretty quickly: green-tech (good or green-washing) is green-tech. We’re into it, but it’s better covered elsewhere. 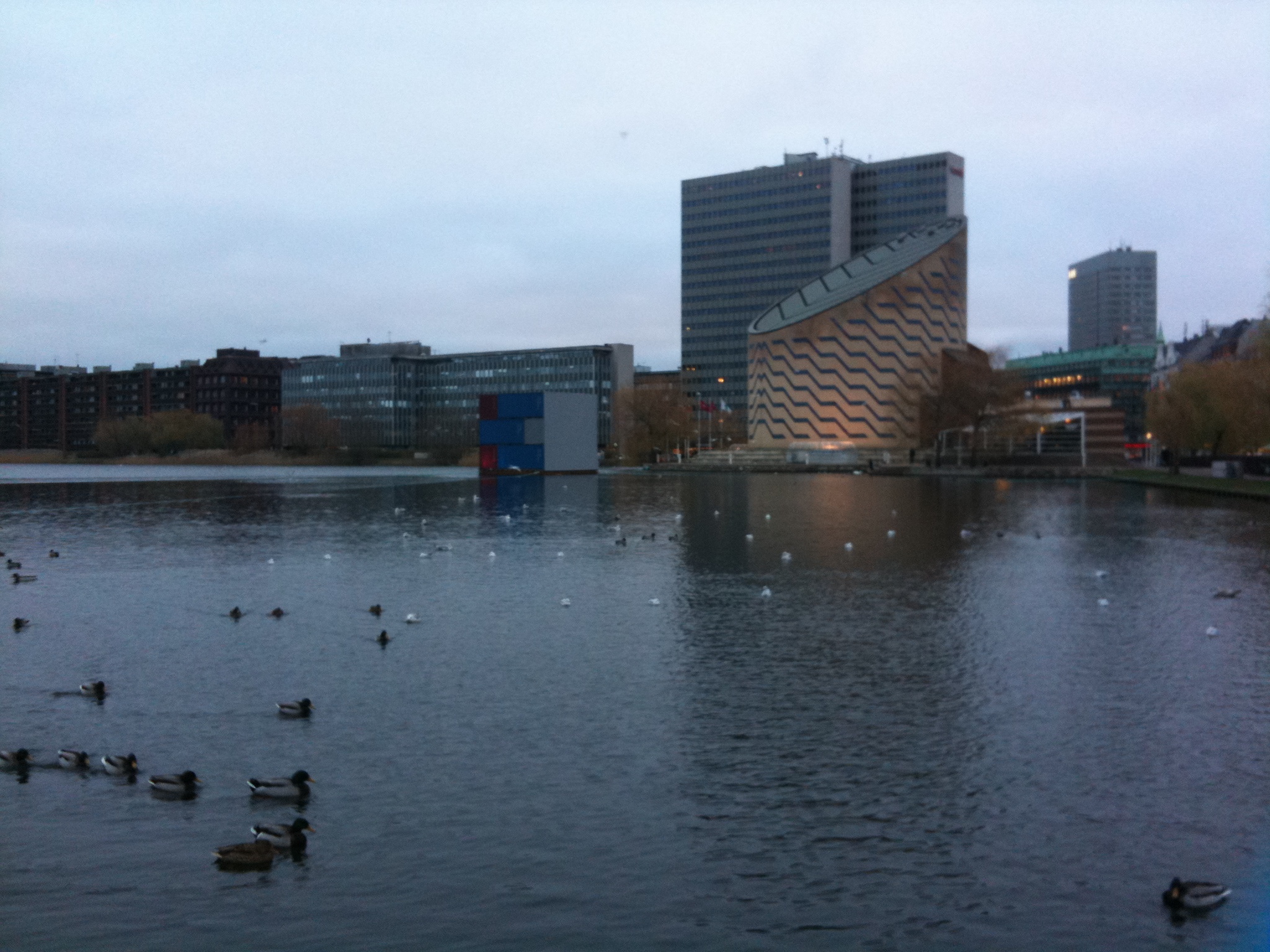 We then continued on to view the CO2 Cube floating by the Tycho Brahe Planetarium. After the artist renderings  was surprised to see it’s construction was of shipping containers and that it had media on 2 of 4 sides. They were recalibrating the video, but we got some footage you can see from posts yesterday. We only strayed away for a little while so that we could wander towards the Downtown Hopenhagen Live area until we spoke with Deanne LeRue of the Meridian Health Foundation and Millennium Art and Steve Mason of Obscrua Digital.

Afterwards we returned for some quality time with the work at Hopenhagen Live. This green glowing cluster of portable exhibition rooms showcased policy, the integration of sustainable solutions into the city scape and some creative interpretations highlighting everyday relationships to the environment. A favorite was The Apartment, seen in a quick video here: 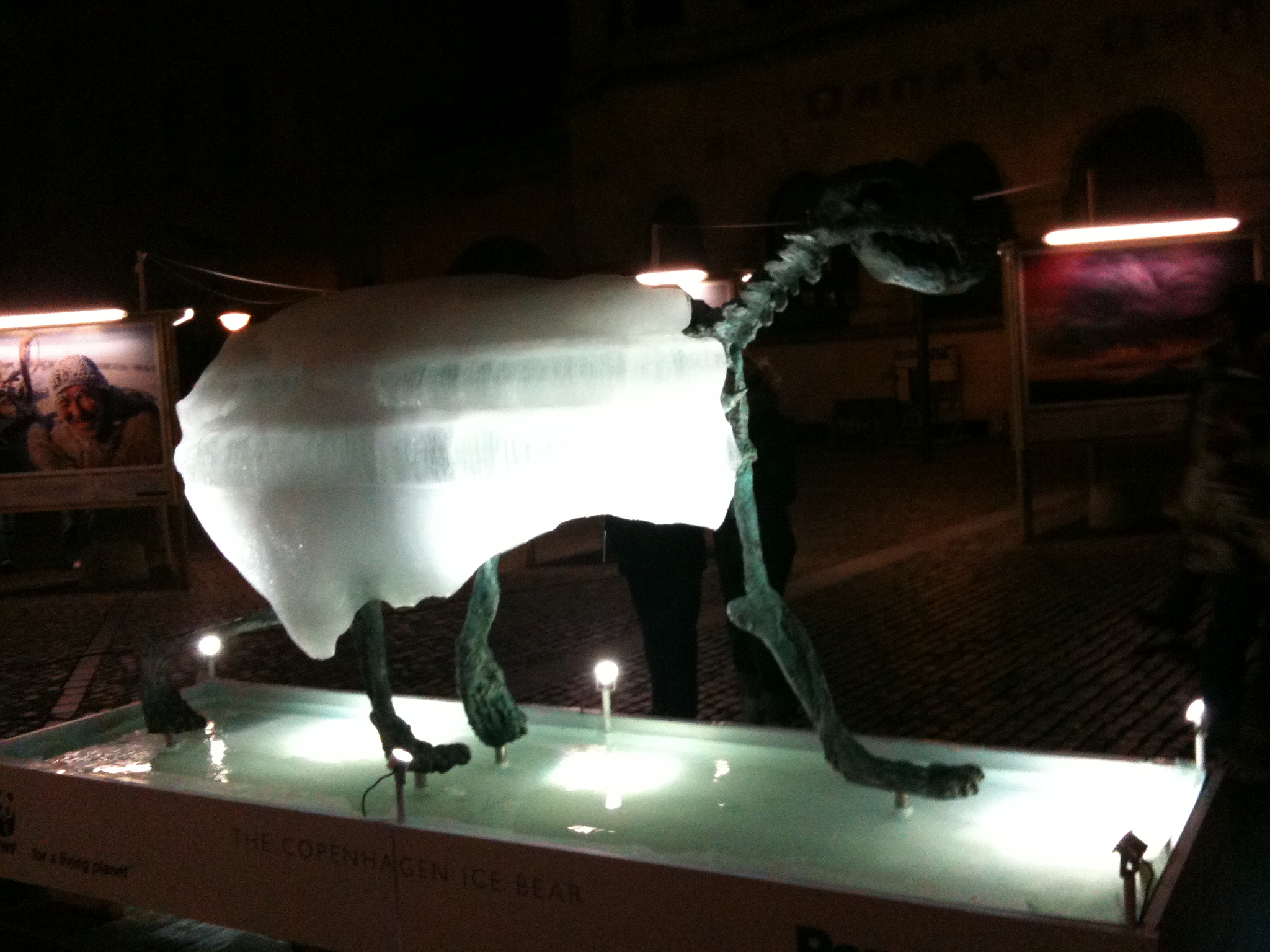 We wandered to the Polar Ice Bear to check it’s melt status, slowed by the freezing temperatures we’ve dipped into. After dinner we headed over to the CO2 Cube Reception, which was a high class affair, no pictures, but we did catch some night footage of the cube.

We did miss the demonstrations going south, which you’ll likely know resulted in hundreds of arrests. We did hear the helicopters and sirens as Police sprung into action, preemptively arresting people after a group of anarchists started egging them on. Tensions are a little high now, though the majority of all demonstrations have been peaceful.

With everything going on, we felt it was important to offer some guidance around town. So, to help others better find the arts activities occurring in Copenhagen, I spent the rest of the night trying to get everything onto our events calendar and created a google map for those who want to find their way around, guided by Eco-Arts.

Monday is now wrapping up and the center of the city, all the way to the Bella Center is policed to within an inch of it’s life. However, we both leave (though I return just 24 hours later) on Tuesday, so Monday became about trying to see everything that was open (like many cities, cultural institutions in Copenhagen are closed on Mondays).

We began by heading to the wrong address for the Poulsen Gallery. But, once we found our mistake, we were able to make it to the installation of Ghost Forest in Thorvaldsens Plads, right around the corner from the real Poulsen Gallery. It’s quite breath-taking, especially with a proper background in the process of getting these stumps here. But, even as we seemed to be some of a few onlookers, there was a constant police presence here and along the canal. 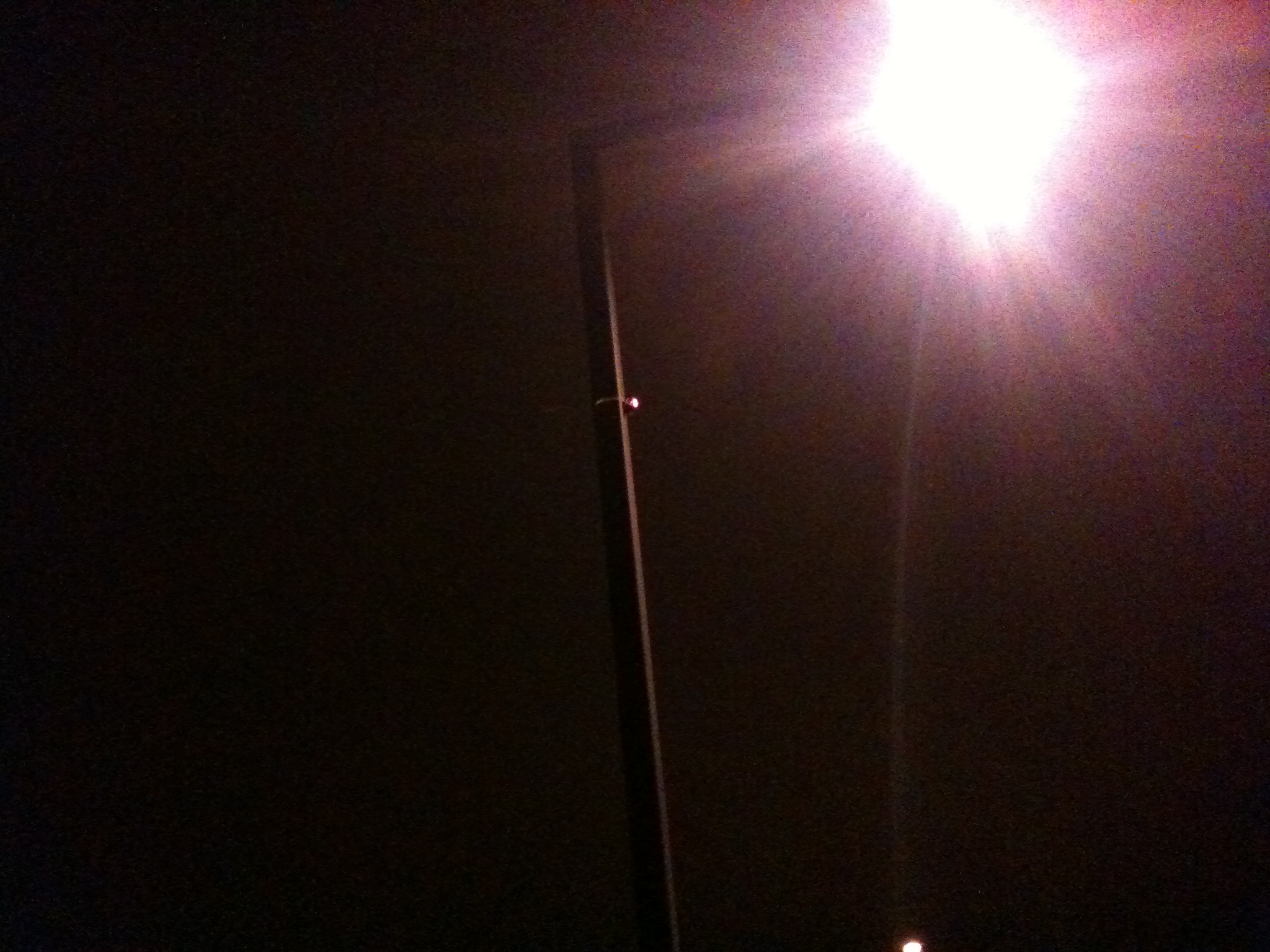 LED at 7 meters high, where the sea will rise here if Greenland's ice sheet melts.

The Poulsen Gallery has been turned over to The Colonel (said phonetically and not as one who serves fried chicken or in the military), the identity of french artist Thierry Geoffroy, as his HQ for a number of evolving projects during COP15. This is serving as the headquarters for the Yes Men and their SurvivaBalls (registered trademark), a series of Critical Runs, Facebook projects, and whatever else they come up with while here. It’s advised to check in with them regularly. Upon my return, I’ll likely head back over to try and talk to some of them about what they are doing. We were lucky to be invited to a semi-junket event, which we’ll get to in a moment.

With the short daylight moments dwindling, we walked to the Bella Center, hoping to find the path set by Glowing Climate, which we were able to find some of as we got closer.

It should be remarked that the Bella Center is not in the center of Copenhagen. It is, from our lodgings, 8.4km or 5.2 miles. From the center of town it is 5.9km or 3.7 miles.

While we didn’t see much until right up to the Bella Center, as the lights from 7m began to appear overhead.  Once we were there the walk was worth it. The Pulse of the Earth is a fantastically creepy piece and really lends to the night time, what I’d venture to call semi-apocalyptic scene that is the entrance to the barricaded center. This is entirely appropriate, COP15 itself is semi-apocalyptic. Between the pulsing red lights of the installation, the cold an huddled hopeful observers lined up at the fences, scores of police, Avaaz.org‘s and Climate Action Network‘s Jumbotron showing the award for fossil of the day, press, vegans dressed in animal costumes pass out bags for converts and the ground littered with pamphlets (really now), it was all a bit amazing to see. 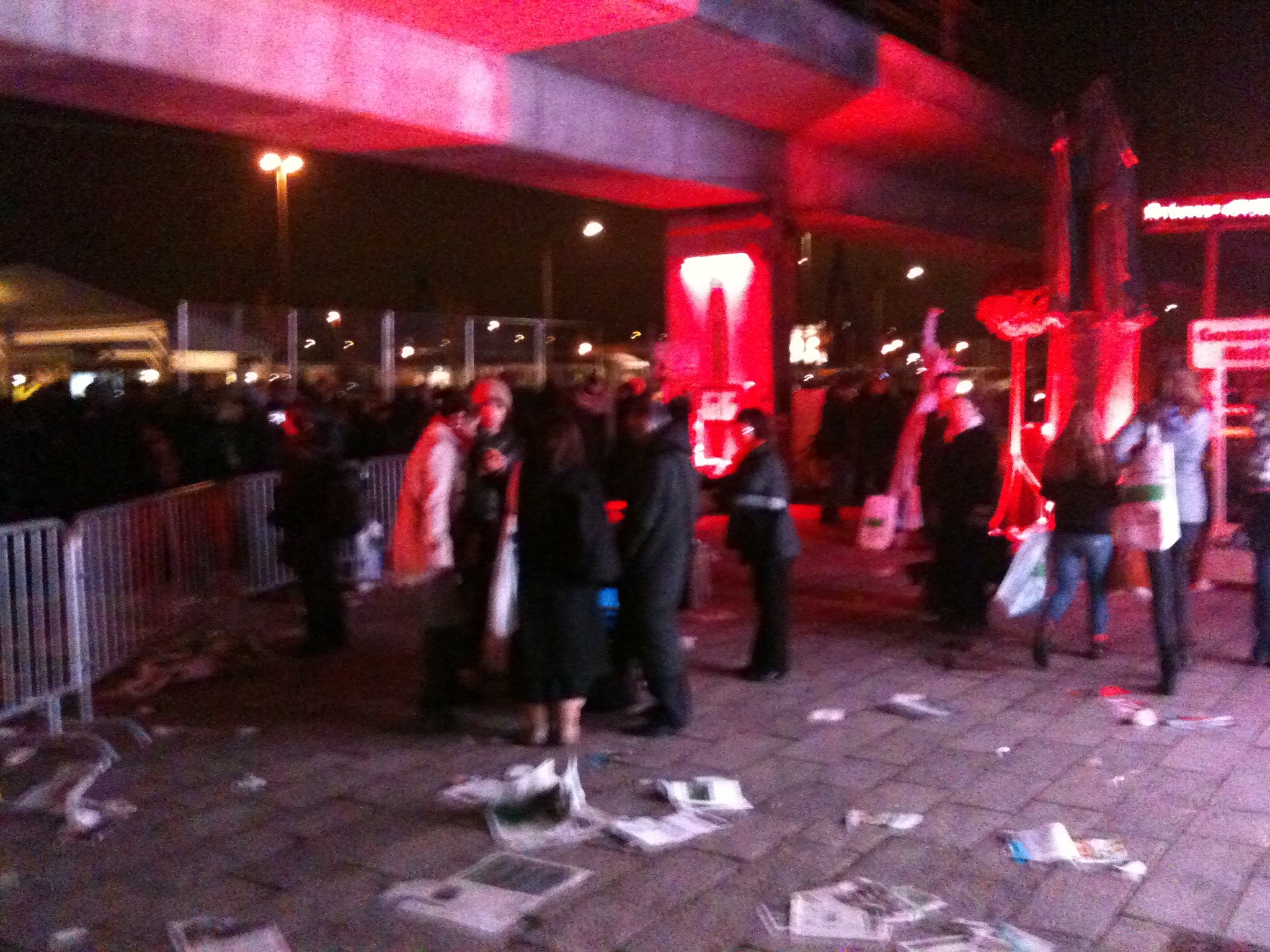 As the talks let out, we hopped the metro back into town. We had diner and made it to the Poulsen Gallery event, were we saw a demonstration of the SurviaBall (still a registered trademark), were treated to a song from the Red Suited Climate Debt Agents (accompanied by the green suited Mr. Green from Oxfam), and milled about the gallery while that day’s talks were remixed for ambiance.

We made out way home, finding that it too was lined with the flashing red markers from 7m, just as the reports of clashes between activists and police in Christiania started to make it into our news feed. I had planned to visit Christiania upon returning from the sojourn to London, but that’s now differently colored. Word on the street was that the police had left the area, to some great extent, alone, as to focus on the Bella Center and downtown. As I write, it is being evacuated and those in cafés are being told to leave or be arrested.

It’s getting colder here in Copenhagen, but tensions are starting to boil over.

Tomorrow we both head to London. Miranda will continue to head on home, but I will be there for the Future Arcola launch event at City Hall. I will also , finally, meet William Shaw of the RSA in person, after missing him by hours in Copenhagen.

More recap soon. When I return the museums and exhibition halls will be open, while parts of town are shut down. And I’m curious as to see how we move around the city when Obama arrives on Friday.