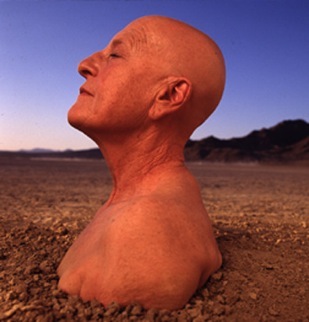 Rachel Rosenthal, Artistic Director and performer with The Rachel Rosenthal Company, is an interdisciplinary performer who has developed a revolutionary performance technique that integrates text, movement, voice, choreography, improvisation, inventive costuming, dramatic lighting and wildly imaginative sets into an unforgettable theater experience. Over the past thirty years, she has presented over 35 full-scale pieces internationally. Critics have called her “a monument and a marvel” and Rosenthal has been critically ranked with Robert Wilson, Ping Chong, Richard Foreman, Meredith Monk and Laurie Anderson by Richard Schechner, editor of The Drama Review (TDR).

She is an N.E.A., J. Paul Getty Foundation and California Arts Council Fellow, and recipient of numerous awards, including an Obie for Rachel’s Brain, the College Art Association Art Award, and the Women’s Caucus for the Arts Honor Award for Outstanding Achievement in the Arts.  In 1994, she was chosen by Robert Rauschenberg to represent Theatre in his suite of prints, Tribute 21, and in 1995 received the Genesis Award for spotlighting animal rights issues in her work.  Rosenthal formed the Rachel Rosenthal Company in 1989 in Los Angeles.  The thematic emphasis of the Company’s work encompasses artistic, social, environmental, technological and spiritual issues presented in a visually, viscerally compelling form.

Born in Paris of Russian parents, Rosenthal’s family fled Europe during WWII to New York where she graduated from the High School of Music and Art and became a U.S. citizen. She studied art, theatre and dance in Paris and N.Y. after the war with such teachers as Hans Hoffmann, Merce Cunningham, Erwin Piscator and Jean-Louis Barrault.

She moved to California in 1955 where she created the experimental Instant Theatre, performing in and directing it for ten years. She was a leading figure in the L.A. Women’s Art Movement in the 1970’s, co-founding Womanspace, among other projects. Since 1975, Rosenthal has focused primarily on creating new works, writing, performing and teaching.

In 1990, Ms. Rosenthal premiered Pangaean Dreams at The Santa Monica Museum Of Art for The L.A. Festival.  In 1992 filename: FUTURFAX was commissioned by the Whitney Museum in New York. In 1994 she premiered her 56-performer piece Zone at the UCLA Center for the Performing Arts Wadsworth Theatre.  Between 1994 – 97, with her newly formed Company, she revived her acclaimed Instant Theatre of the 50’s & 60’s asTOHUBOHU! and went on to collaboratively createDBDBDB-d: An Evening (1994), TOHUBOHU! (1995-97),Meditation on the Life and Death of Ken Saro-Wiwa andTimepiece (1996), The Swans and The Unexpurgated Virgin (1997).  Both Timepiece and The Unexpurgated Virgin premiered at the Fall Ahead Festival at Cal State LA.  She has toured extensively in the U.S., Canada, Europe and Australia.

Rosenthal has taught classes and workshops in performance since 1979, in her LA studio as well as around North America and Europe.  Rosenthal has lectured at Carnegie-Mellon University’s Robert Lepper Distinguished Lecture in Creative Inquiry series, as a lecturer/presenter at the first Performance, Culture and Pedagogy Conference at Penn. State (1996).  In addition to personal appearances as performer, panelist and lecturer, Rosenthal teaches performance in her private studio in Los Angeles and has been a visiting artist at such institutions as The Art Institute of Chicago, Otis/Parsons, New York University, University of California (UC) Los Angeles, UC Irvine, University of Redlands, UC Santa Barbara, California (Cal) Institute of the Arts, Cal. State University Long Beach, Cal. State Los Angeles and at the Naropa, Esalen and Omega Institutes.

Awards include: the Vesta Award (1983), the Obie Award (1989), the Artcore Art Award (1991), the College Art Association of America Artist Award (1991), the Women’s Caucus for Art Honor Award for Outstanding Achievement in the Arts (1994) and The Fresno Art Museum’s Distinguished Artist Award (1994). Artist Robert Rauschenberg has honored her in a new suite of prints entitled Tribute 21 (1994) as the representative for Theatre in a list including Art, Music, Civil Rights, Space & Ecology.  Recipients include Mikhail Gorbachov, R. Buckminster Fuller, Toni Morrison, Nelson Mandela and the Dalai Lama.  In 1995, she received The Ark Trust’s Genesis Award for spotlighting animal rights issues with “courage, creativity and integrity”.  In 1996, she received a Certificate of Commendation as well as a Certificate of Appreciation both from the City of Los Angeles Cultural Affairs Department.  In 1997, she received the L.A. WEEKLY Theater Career Achievement Award.

Rosenthal’s book Tatti Wattles: A Love Story which features her original, full color illustrations, published by Smart Art Press, Santa Monica, CA; a monograph of her life’s work, entitled Rachel Rosenthal, published by the John Hopkins University Press; Rachel’s Brain and Other Storms, an anthology of 13 of her performance texts published by Continuum and Nihon Journal an artists book of Japanese Sumi Ink paintings on Arches paper are all currently available.  Rosenthal’s work centers around the issue of humanity’s place on the planet.  She is an animal rights activist, a vegetarian, and companion to 3 dogs.