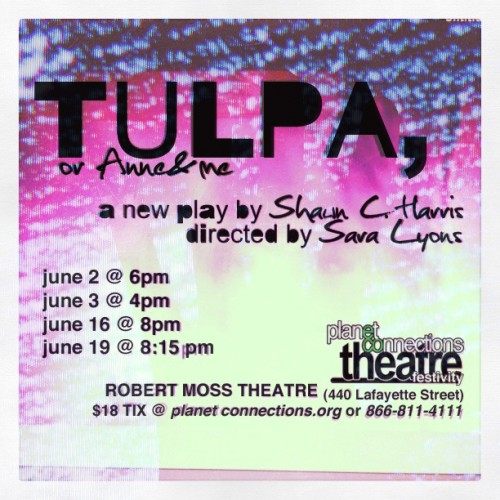 This is exactly how playwright Shawn C. Harris and director Sara Lyons are taking green theatre one step further for their production of Tulpa, or Anne&Me for the Planet Connections Theatre Festivity.

Tulpa, or Anne&Me is the first piece developed through Crossroads Theatre Project and will have its world premiere at the Planet Connections Theatre Festivity. Tulpa, or Anne&Me tells the story of a web comic artist whose world gets turned upside down when Anne Hathaway crawls out of her television set, creating an intimate portrait of how race impacts their lives as women, friends, and human beings.

Says Harris, “As a fledgling project putting up our very first production, going with paperless marketing was an easy decision for us. With a shoestring budget, we only had enough money to pay for the essentials of staging our play. But Sara and I quickly discovered that our necessity gave us a powerful way to practice green theatre.”

Through a combination of e-mail, social media, and face-to-face, the production team of Tulpa, or Anne&Me has found a way to reach their audience without wasting paper, ink, or money.

“Because we can’t rely on a crowd of people showing up to our play because they like our postcard, we have to focus on making real connections with people. It’s time-consuming and exhausting, but the deeper connections we’re making with people is worth it. We’re reaching people who normally would not come to our show or see theatre at all, but they’re interested in what we’re doing and really want to support us.”

Shawn is committed to using the arts – particularly theater and film – to challenge mainstream representations of women, people of color, and LGBTQ people. About a year ago, Shawn founded Crossroads Theatre Project to give unconventional Black playwrights a chance to develop their own work. She runs two blogs, Ars Marginal and Love’s Labors Lost, geared towards examining the arts and entertainment from marginalized perspectives.

Shawn doesn’t limit her activism to cyberspace. She is also a member of WOW Cafe Theatre, a theater venue collectively run by all kinds of women. Lately she has been working with the People’s Institute for Survival and Beyond, where she’s learning more about anti-racist analysis and organizing.

Despite all this activity, Shawn is really just a shy, quirky Southern girl who’s more comfortable in her own little world than in the spotlight.

SARA LYONS (Director) is a recent graduate of the University of Wisconsin- Madison with a degree in Theatre and Gender and Women’s Studies. She has experience as a director, teaching artist, and performer, and is committed to creating theatre that challenges the status quo and inspires its audience towards a more just and compassionate society.

Sara was introduced to the festival process as the Assistant Director on the premiere of Monica Bauer’s The Higher Education of Khalid Amir at the 2008 Midtown International Theatre Festival. She worked on several University productions at UW-Madison as a director and performer, and spent four years studying and performing long form improv with The Titanic Players. As a performance artist, she recently performed original work at P.S. 122 under the direction of Tim Miller.

As a teaching artist and applied theatre facilitator, Sara has worked internationally with children of all ages in impoverished communities, including rural Bocas, San Luis Potosi, Mexico as a member of the 2009 Savvy Theatre Works crew and in urban slums in the townships around Cape Town, South Africa as a 2010 summer teaching fellow with Teach With Africa. At home, she worked with patients and staff of the adolescent unit at South Beach Psychiatric Center and currently teaches drama in a Brooklyn elementary school.

Sara looks forward to continuing her journey as an artist-activist with Tulpa, or Anne&Me.

The crossroads are rooted in African folklore, Vodou and Delta blues as a place where the strange and unexpected happen. You can speak with the dead, meet the spirits of your ancestors – even sell your soul to the Devil! There is no telling what can happen when you come to the crossroads. In a similar vein, Crossroads Theatre Project challenges assumptions about what African diaspora theatre is and what it can be.

THE PLANET CONNECTIONS THEATRE FESTIVITY is New York’s premiere eco- friendly/socially conscious not-for-profit theatre festival. Fostering a diverse cross-section of performances, the festival seeks to inspire artists and audiences both creatively and fundamentally, in a festive atmosphere forming a community of like-minded artists. At the heart of the festivity are individuals striving to create professional, meaningful theatre, while supporting organizations, which give back to the community at large.

Arts & Democracy Project’s most recent nation-wide conference call was focused on recent events in Egypt and the extraordinary pro-democracy movements sweeping across North Africa and the Middle East.  The call highlighted how artists, art spaces and cultural organizers in the region and in the U.S. are participating or responding, and how more cultural workers can engage in positive ways. With Dalia Basiouny, writer & theatre artist (Egypt); Ahmed Issawi, Alwan for the Arts (Egypt/NYC); and Khaled Mattawa, poet & professor (Libya/Michigan), among others.

A recorded transcript is available.

The vision of climate change provided by the arts complements the analytical information given by the science. The landscape of numbers can be populated by dreams in the form of images, dance or music, leading to a more complete understanding of how our planet works. Join The Earth Institute, Columbia University; the Segal Center; and artists, scientists, and communication experts working across multiple disciplines in an inspirational, informative program to explore present and future connections between the arts and climate change science. In honor of Earth Day. Co-curated by Lisa Phillips.

Afternoon session at 3:00 p.m. will feature:

is the Assistant Director for the Lenfest Center for Sustainable Energy at the Earth Institute, Columbia University, where she manages programs and funding initiatives for cutting-edge scientific research in alternative energy. She enjoys bringing together artists and scientists to maximize the impact of, and appreciation for, their work. She comes from the nonprofit performing arts sector, where she held roles as a producer, booking agent, general manager, and consultant. She served as the Director of Booking for MAPP International Productions, representing inter/national contemporary dance, theater, and multi-disciplinary artists. www.energy.columbia.edu

Earth is at a critical crossroads. While revolutionary advances in science and technology have lifted humanity to new heights of prosperity and longevity in many parts of the world, hundreds of millions of people are vulnerable to the impacts of hazards and natural disasters, extreme poverty, infectious disease and a host of other challenges. At the same time, human activity, especially in the last 100 years, is threatening the health of the environment and potentially posing risks of unprecedented magnitude to our shared future.

The Earth Institute, Columbia University is the world’s leading academic center addressing the challenges of sustainable development. Our mission is to mobilize the sciences, education and public policy to achieve a sustainable Earth. The Earth Institute’s overarching goal is to help achieve sustainable development primarily by expanding the world’s understanding of Earth as one integrated system. We work toward this goal through scientific research, education and the practical application of research for solving real-world challenges. With 850 scientists, postdoctoral fellows, staff and students working in and across more than 30 Columbia University research centers, the Earth Institute is helping to advance nine interconnected global issues: climate and society, water, energy, poverty, ecosystems, public health, food and nutrition, hazards and urbanization. With Columbia University as its foundation, the Earth Institute draws upon the scientific rigor, technological innovation and academic leadership for which the University is known.