When it comes to theatrical lighting, the gear is changing at an incredible rate. It feels like just a few years ago it would be impossible to consider LEDs for anything more than special effects. Yet today, multiple manufacturers have created LED profile and wash fixtures that are capable of stunning stage washes, pin spotting, and even beautiful warm front light. The days of energy efficient fixtures not being able to do the job of stage lighting are drawing to a close.

When it comes to moving toward a sustainable future, it’s hard to imagine a community more supportive that theatrical professionals. Whether it’s the green captains of Broadway shows, or scenic designers putting in the extra effort to make sure their set is built from found materials, across our community out of both ethos and necessity, we are conserving resources every day.

One of the biggest lessons the BGA has learned from it’s partnership with the NRDC is the concept that there is no green, only greener than the day before. It’s in that spirit that the Broadway Green Alliance decided to launch the greener lighting guide. Which of course, begs the question:

What is the Greener Lighting Guide?

Essentially the guide is a database. The Broadway Green Alliance believes that the road to greener choices starts with better information. The truth is not everyone in a position to make spending decisions can walk the floor at LDI. When the grant money comes into a regional theater, or when the dean decides it’s time to spend money on the theater department, the Broadway Green Alliance believes it’s that point of purchase that can make a tremendous impact on what gear is used in these institutions for years to come.

A database in and of itself isn’t useful unless it’s organized in a way that makes sense. The Broadway Green Alliance’s goal with the design of the website was that it could work for both lighting people (lighting designers, master electricians and programmers) and non-lighting people, (artistic directors, company managers, technical directors) alike. So the instruments in the guide are organized by what type of light they produce.

When you click on one of the categories, you’ll find a typical or “standard” instrument, then a list of greener alternatives comes below. If that’s as far as you want to go, you can simply call your local dealer and ask to arrange a review of these instruments in your theater. If you want to know more, click on any listed instrument for detailed stats and links. All data is self-reported by the manufacturers, this is the fastest way to keep the database updated as manufacturers update their offerings. The Broadway Green Alliance couldn’t be more grateful to our launch partners, Chauvet, Robert Juliat, and GLP for helping us to populate the initial database. The Broadway Green Alliance will adding new data every week, and will be sure to announce updates on the BGA blog. In the meantime, the BGA hopes you’ll browse around and tell us what you think of the guide. The Broadway Green Alliance wants to make this guide as valuable as possible for the theater community.

E-Waste Recycling Rally: The NFL is Playing for Keeps and Greening Broadway

The NFL is Playing for Keeps

Before the Super Bowl last year, more than 7.5 million households purchased a brand new television before the big game. Whether viewers are watching to catch the big game, the spectacular halftime show, or even for the striking commercials, everyone wants the perfect display to make their viewing a touchdown. If you’re one of these many devoted Super Bowl fans, you are probably searching for deals during Black Friday or Cyber Monday sales. No matter how you watch your favorite team, don’t forget to bid farewell to your old TV sets responsibly. 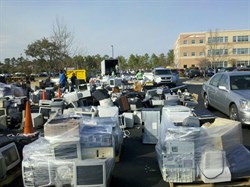 In the United States, more than 80% of TVs are left to be dumped in landfills. Landfill disposal poses a threat to the environment and well-being of the community. Certain televisions may contain hazardous and toxic materials, such as lead, mercury, and arsenic.

Recycling TVs will not only keep this toxic waste out of the ground, but it will also eliminate the need to extract other limited resources. Once a TV is dropped off to be recycled, it is taken to a special facility where it is taken apart and separated for recycled disposal. The glass from the screens, for example, is ultimately used in other products.

Landfill interception! Verizon and the NFL simplified this issue by offering an event for all their favorite fans. People were able to bring their old TVs and other personal e-waste to Verizon’s Recycling Rallies on 1/8 in Times Square and on 1/7 in Fair Lawn, NJ. To find a recycling center located near you, please visit  1800Recycling.com.

Enjoy your new devices, but don’t forget to recycle your old ones! Happy shopping!

By Rebekah Sale, Coordinator of the Broadway Green Alliance

For the past five years, the Broadway Green Alliance (BGA) — an industry initiative that educates, motivates, and inspires the entire theatre community and its patrons to adopt environmentally friendlier practices — has been working to green-up Broadway. Besides working with theatre owners to replace all of their roof and marquee lights with energy-efficient bulbs, we now have a backstage liaison at nearly every Broadway show, operate a free binder exchange, circulate information on greener, better practices for all areas of theatre, and hold recycling collection drives four times a year.

For Broadway Green Alliance’s next drive, the alliance was thrilled to be partner with Verizon and the NFL Environment Program on a January 8th Electronic-Waste Recycling Rally in Times Square. Take a look at the website, BroadwayGreen.com, for event details as well as lots of resources and useful links. 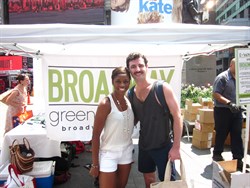 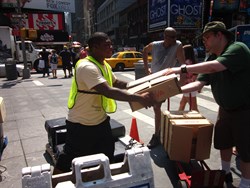 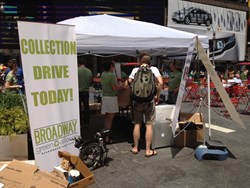 When the Broadway Green Alliance holds electronic waste drives we always save all iPods for our friends at the Broadway Alzheimer’s iPod Drive.  This inspiring program, started by Broadway musician Dave Roth, puts iPods into the hands of area Alzheimer’s patients through the Music and Memory Foundation (musicandmemory.org). The iPods are loaded with music familiar to these patients and what happens when these patients hear the music they remember is amazing.  As Dave explains,

“My mother spent her life devoted to conducting her folk choir in church for nearly 35 years. Unfortunately she has slipped into the fog of Alzheimer’s disease. She has not only lost memories but also the ability to speak. Using Music & Memory’s idea of personalized music, I decided to bring the music back in her life. The results were astounding because she surprisingly was able to recall lyrics and use words that my family and I hadn’t heard her use in years! “

Dan Cohen, the founder of the non-profit Music and Memory, explains:

“Although it doesn’t work for everybody and it is not a cure, it is turning out to be pretty powerful medicine for persons with dementia and others facing cognitive and physical challenges. Re-connecting nursing home residents with “their” music improves mood and enjoyment, increases sociability, enhances cognition, and reduces agitation.”

“Not only does the patient benefit but the families also feel the rewards from the therapeutic process of reminiscing about their loved ones’ favorite music of their past. It brings families together at a time when they already feel the impacting loss of their loved ones. The Broadway community has banded together and continues to ask everyone to donate their new or used iPods and to remember that ‘every used iPod can bring back a lifetime of memories!”

iPods collected at the January 8th event will go to Music and Memory to provide New York area nursing home residents with iPods with personalized playlists. Currently there is a waiting list of hundreds of residents who are waiting to enjoy their music.