Evergreen Brick Works is looking for the best short videos from across Canada! 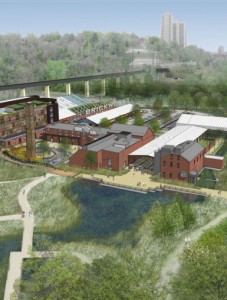 Evergreen, a national charity, has transformed the former Don Valley Brick Works from a collection of deteriorating heritage buildings into an international showcase for urban sustainability and green design. Evergreen Brick Works is open year-round, and includes permanent and temporary art installations responding to the site’s geological and industrial heritage. A looped compilation of videos is part of the new media program that will introduce a wide range of environmental issues.

Artist fees will be paid for videos that are chosen to be included in the compilation.

Submit: Name/contact, your bio, brief synopsis, length of video, and link to your video to: kmcbride@evergreen.ca In the subject line please put: Evergreen Video Art Submission

Issue #2 of the Journal of Arts & Communities is out from Intellect in Bristol, England, examining “the arts as a socially relevant practice.” Edited by Hamish Fyfe, of the faculty of Creative and Cultural Industries, University of Glamorgan, Wales, the issue offers (not online) articles on “Along Paseo Boricua: The Art of Josué Pellot Gonzalez” by Sharon Irish, about a project that engages with the public on Paseo Boricua in Chicago&apos;s Puerto Rican neighborhood; “Inventing rituals; inhabiting places – ritual and community in public art” by Ruth Jones, who commissioned five temporary art events in public spaces in Cardigan, Wales, part of the project Holy Hiatus; “Riverscross – A Drama-in-Health Project with Young People, run by Spanner in the Works” by Tony Coult, which produced a soap opera with adolescents in a mental-health hospital, and more. Issue #1 is accessible online. Based on that story a couple of weeks ago on the RSA Arts & Ecology website, I have this feature in the current New Statesman:

There’s a hint of tumbleweed blowing down the nation’s high streets. Behind the headline-worthy collapses of Woolworths and MFI are the disappearances of hundreds of smaller shops. By the end of 2009, the analyst Experian predicts, one in six UK shops will have closed down. Not only will the effect on employment be catastrophic, the projected 135,000 vacancies will not be good for the health of town centres – empty shopfronts quickly multiply.

Yet what is grim news for some may prove a bonus for artists.

From the abandoned warehouses of Shoreditch in east London to the empty apartments of Berlin, we know artists gravitate to disused space, and have been successful in transforming it. Can art now drive the regeneration of slack retail space by turning it into a low-cost cultural playground?

In Durham, Carlo Viglianisi and Nick Malyan, an artist and an art fan, both in their early twenties, took over the lease to a disused off-licence in December last year and reopened it as Empty Shop (www.emptyshop.org), a gallery and creative centre where local sixth-form college students can go for media and art classes. “The local response has been fantastic,” says Viglianisi.

They are far from alone. Across the country, artists and would-be gallerists have been having the same idea, seemingly quite spontaneously. This January in Brent, a group of artists formed Wasted Spaces; they are holding their first show in a vacant retail space in Wembley this summer. In Halifax, another group has taken on an empty unit at the Piece Hall and opened Temporary Art Space (www.temporaryartspace.co.uk), which will run for six months…

See the rest of the feature here.