Historically, the Prague Quadrennial has been an international exhibition of scenography (stage design), where countries come together to display the best of their theater work and the spirit of their design methodologies. It’s a mass of gatherings. It’s discussions and performances and lectures and guerilla moments in the streets (is that a performance or a conversation? Is she injured or just creating an interesting shape? Is that a flamboyant dress or a costume?). It’s also Scenofest, the educational arm of the Quadrennial, featuring a series of workshops and organized talks.

At DAMU, the Czech Academy of Dramatic Arts, CSPA Executive Director Ian Garrett gathered with Nick Moran of the Central School of Speech & Drama and myself to discuss sustainability in design on a panel led by William Mackwood of York University (best known for hosting the Staging Sustainability conference earlier this year). While no one walked in with a paper dress or noisemaking speakers, some fascinating discourse ensued regarding the nature of performance.

Ian Garrett started off with a powerpoint overview of green practices in the arts. He’s extensively acquainted with the overall carbon impact of the average theater production: length of run, power consumption, material. In the years that he’s been building the CSPA, he’s also been gathering a mass of information on the complexity of the arts’ environmental impact. Garrett brings into the discussion issue of audience transportation (a huge factor in carbon footprint) vs. the potential impact of audiences if they had just stayed at home that night. He also discussed the work of groups like Mo’olelo Performing Arts Company and the Broadway Green Alliance.

Following him was Nick Moran, who focused on the resources on the site Julie’s Bicycle and the need within the green movement to make changes on a small (and totally unsexy) level, like type of toilet paper, while continuously pressing for systematic change in arts production culture. He discussed everything from tungsten lamps to fuel cells from the standpoint of a lighting designer who fiercely believes in sustainability.

I stepped up and discussed my obsession of the past several years—ecologically restorative art, including works from Xavier Cortada and Mierle Ukeles, and some of my own work.

Then Mackwood wrapped up presentations with examples of his current work and research at York and Out of the Box Productions, including a greening of “Opera Erotique,” which used all-LED lighting. He discussed design qualities unique to the famously energy-efficient lighting, including cut-lines on dancers, strobe capabilities, and the ability to fit an entire lighting rig in the trunk of a car. What followed was an interesting and brief discussion of LED design. Nick Moran brought up the fact that, unlike tungsten, LED color properties don’t change as they fade. “Imagine that you’re in a world where, for the first time, your lights change color as they fade out. WHAT?! What have you done? Change it!”

In the roundtable following, balance was a key issue in discussion: between medium and message, between creative and financial needs, between work and decompression.“You’ve gotta make good work, otherwise there’s no point: worthy, dull, theatre does not change anyone’s mind,” said Moran. The audience was a point of debate. Are we trying to change their minds, or just give them more sustainable spectacle? Are we trying to address the needs of their transportation, or just present eco-theater? In a field of limited resources it’s all about priorities, and needs are complex. As performances exploded all over the streets of Prague, a very grounding discourse took place at DAMU. Like every conversation about sustainability, it leads to more questions, more conversations, and a grab-bag of actionable items. Regardless, it’s refreshing to be in a room with sharp minds that are focused on this issue, and there is potential for a wider impact at the next PQ.

By Another Name: New Metaphors for Sustainability from Wallace Heim on Vimeo.

To launch the Ashden Directory and Ashdenizen’s major new project on metaphors for sustainability, a new DVD was just released, devised and directed by Wallace Heim.

“Sustainability is a concept without strong or imaginative metaphors. Over the next months, we’ll ask artists, scientists, activists and cultural commentators to suggest a metaphor for sustainability.”

The first four responses are presented in the embedded video. (The film was shown at the Staging Sustainability conference, York University, Toronto, 20 – 22 April 2011.) Updates from the project will be posted on the Ashden directory: http://www.ashdendirectory.org.uk/news.asp

Florida Gulf Coast University’s Center for Environmental and Sustainability Education, and Departments of Language & Literature and Communication & Philosophy are currently accepting individual abstracts and panel proposals for FGCU’s 2nd International Humanities and Sustainability Conference, to be held in Fort Myers, Florida, October 7-9, 2010. Our goal is to encourage interdisciplinary conversations about the role of the humanities in fostering sustainability, however defined, and about the sustainability of the humanities as we move into the second decade of the 21st Century.

Please submit 300-500 word paper and panel proposals, with A/V requests, by email to HandSCon@fgcu.edu. The deadline for proposals is June 4, 2010 at midnight EST. Include all text of the proposal in the body of the email (attachments will not be opened), and be sure to include full contact information for all panel members. Seehttp://www.fgcu.edu/cas/HandScon/ for more information.

Possible questions for investigation might include, but are not limited to:

A Piipaash song cycle and dance recently filled the Arizona State University Art Museums Ceramics Research Center during an intervention by Postcommodity, an interdisciplinary indigenous artists collective. Postcommoditys installation, “Do You Remember When,” is part of the museums exhibition “Defining Sustainability,” August 28-November 28. The artists cut a square hole in the gallery floor, exposing the earth beneath the institution, and displaying the block of removed concrete, standing upright, on a pedestal. Its “a spiritual, cultural and physical portal,” say the artists, contradicting the rigid Western scientific world view of our environment. Postcommoditys Kade Twist Cherokee makes it clear that the piece was a collaboration with the museum – not the university. The show parallels ASUs October global sustainability conference. “Sustainability has become an academic gold rush; its been turned into a commodity,” Twist told the Phoenix New Times 8/30/09. “The university is having this discourse without including any indigenous people in it.”

October 3, 2009
Q and A with Habitat for Artists Collective
Solar One (East River at 23rd St)
New York, NY 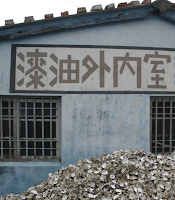 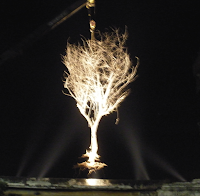