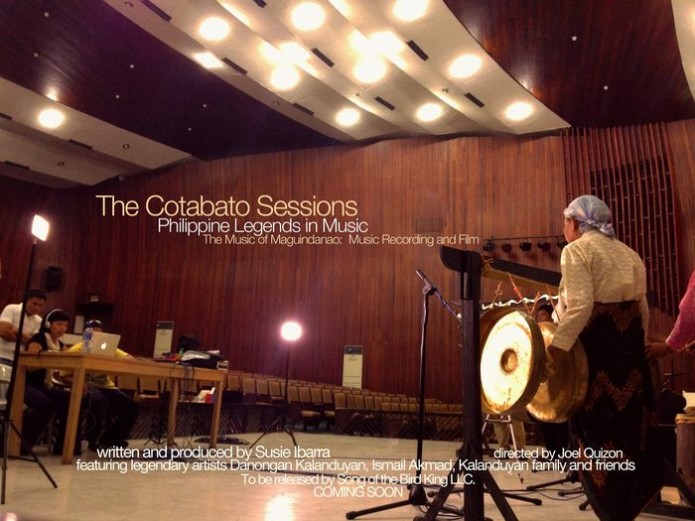 The Cotabato Sessions, a music legacy from the Philippines by Susie Ibarra — Kickstarter

The Cotabato Sessions, a music legacy from the Philippines by Susie Ibarra — Kickstarter.

Susie Ibarro posted this project on Kickstarter and as of February 20th she announced it has been fully funded. For information about the project from the Kickstarter page, read on or visit the original posting. 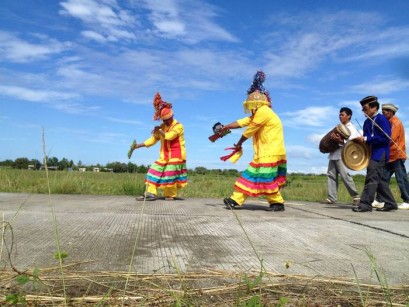 The Cotabato Sessions is a full length music album and 30 minute short music film that features the music legacy of one family, the Kalanduyans, in Cotabato City, Mindanao, Philippines. 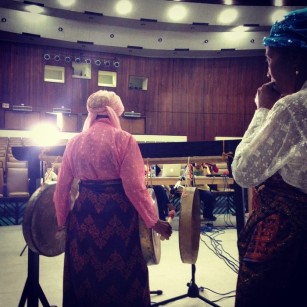 Who are the Kalanduyans and what is the music legacy?

The Kalanduyans are several generations of musicians from the Maguindanaon tribe in the Philippines who perform a beautiful Indigenous art form known as kulintang, gong ensemble music as well as lute string music, the kutyapi. Alongside the music there is always dance.

With master kutyapi /lute string player and flautist, Ismail Akmad, we are reminded that the origins of blues are far reaching and that the virtuosity inside 8 notes is endless.

With a kulintang gong ensemble , we can enter a series of entrancing music through a welcome song, Duyog, performed by the Kalanduyan family.

The Cotabato Sessions was recorded and filmed in Cotabato City, Mindanao in the southern island of the Philippines.  It was a rare moment to be able to get together these generations of musicians in the family.

The Kalanduyans are part of a minority Islamic tribe, the Maguindanaons in the Philippines who have been entirely relocated to Cotabato City and elsewhere after many decades of civil unrest in the south.

Who will be the next generation to follow in their footsteps?

This album and film capture the generations of men, women, and youth performing ritual music and its variations in the home of master artist Danongan Kalanduyan, in a procession,  in the courtyard of a mosque and in the recording session of a concert hall. 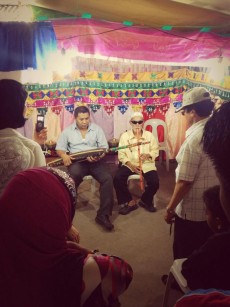 Why pledge to this project?

The Cotabato Sessions is the first album and short film in a series for the company Song of the Bird King LLC (http://songofthebirdking.com/) that will feature digital download album recordings of Indigenous, world music with digital short films that share the stories and culture through the music.  We are working to promote the collaboration of traditional and contemporary music with sustainable practices and offer platforms for the musical communities such as the Maguindanaons to grow.

Alongside Indigenous tribes in the Philippines, Song of the Bird King also works with Indigenous and traditional artists in the New York Seneca Nations, Egypt, U.A.E, Lebanon, Israel, Canada, Korea, Japan, China, Taiwan, Guinea, Cuba, India and will be releasing with its digital music company digital download releases of artists as well as distribute catalogue. Song of the Bird King will continue to partner with independent film companies to create short music films for several of the digital albums.

What are future goals for this project?

The Cotabato Sessions is the first album and short film in a series for the company Song of the Bird King LLC (http://songofthebirdking.com/) that will feature digital download album recordings of Indigenous, world music with digital short films that share the stories and culture through the music.  We are working to promote the collaboration of traditional and contemporary music with sustainable practices and offer platforms for the musical communities such as the Maguindanaons to grow.

Alongside Indigenous tribes in the Philippines, Song of the Bird King also works with Indigenous and traditional artists in the New York Seneca Nations, Egypt, U.A.E, Lebanon, Israel, Canada, Korea, Japan, China, Taiwan, Guinea, Cuba, India and will be releasing with its digital music company digital download releases of artists as well as distribute catalogue. Song of the Bird King will continue to partner with independent film companies to create short music films for several of the digital albums. 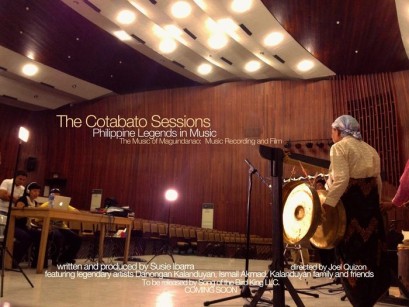 A little bit of a circular reference, but here is an article Executive Director Ian Garrett wrote for Susie Ibarra and Roberto Rodriguez’s Song of The Bird King Blog:

While attending the Arts Presenters APAP Conference in January, Roberto and I sat on a panel, The Tipping Point: Artists and Climate Change led by Graham Devlin. We were delighted to meet at the session Ian Garrett, Executive Director for The Center for Sustainable Practice in the Arts. He is based in LA and at CalArts University where he also teaches Sustainability in the Theatre Department and with interdisciplinary artists. It’s comforting and inspiring to hear and see the work of Ian Garrett and his active commitment to cultural and environmental sustainability. Garrett’s work challenges and engages in dialogue on these issues. Here he speaks about Art and Eco-Justice.   – Susie Ibarra

This past December, I traveled to Copenhagen for the fifteenth Conference of the Partners meeting, better known as COP15. I was there to serve as a witness to the artistic and creative responses to COP15. I was not looking to observe the UN Climate Change Conference itself; I felt this was easily accessible through remote media, and, in some ways, the less interesting event. While COP15 itself had far reaching implications for international governments, I felt my presence could serve to chronicle the other voices that were trying to be heard through less formal means. And, in the winter edition of the Center for Sustainable Practice in the Arts Quarterly, I asserted that this creative sound — from the gallery exhibitions to the street-performance demonstrations — was the only collective, non-political voice. There is no political body that serves as the voice of the holistic sense of Planet Earth quite like those of artists.

Upon my return to California, I participated in the Arts in the One World Conference at California Institute of the Arts (CalArts). In this past year, its fifth, the theme was guhahamuka, a Kiri Rwandan word that refers to the breathless attempt to articulate the inexpressible. And again I came to these thoughts of giving voice to that which can not speak for itself, and trying to communicate things which are nearly impossible to communicate. I continually come back to the necessity of art to fill this void. I see creativity as not just that oversoul of our celestial orb and home, but that which gives all people and things a chance to communicate with others without requiring political power or similar agenda-ed platform. 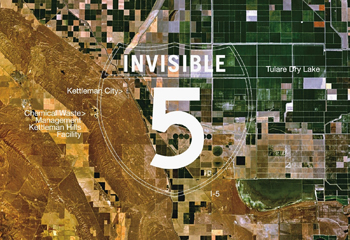 Invisible 5, a project by Amy Balkin, is a prime example of this type of work. Organized as a self-guided audio tour through the California Central Valley along US Interstate Highway 5, this project highlights ecological issues related to the history of this thoroughfare from Los Angeles to San Francisco. This additional layer of spatial encoding transforms the experience of transiting across a typically uneventful stretch of highway into a shocking story of rapid ecological disturbance, injustice, and racism. It reveals a hidden past, lending the inspiration for the project’s title.

My own motor-touring experience comes with a personal history of making this driving numerous times. My father was raised in the San Jose area, and my paternal grandparents were laid to rest there. I grew up traveling back and forth fairly frequently. My brother and sister in-law now live in Oakland, and my wife and I travel when we can to visit and see our little nephew. Were I not to have met Amy and heard her speak about this project, I perhaps never would think about the secrets just beyond the shoulder of the road as I barreled along this route. Without this piece, there would only be silence, and I would have traveled on, ignorant of the veiled violence.

In Balkin’s project, we are told of the duality of this region’s former riches. We hear about building up the area surrounding this new thoroughfare, the impact of oil, the creation of large agribusiness, industrial farming, toxic waste, and deadly fog. The stories are told by activists, residents, officials, and rangers. Without this compilation, though, one might never know the tales this land now holds. There are those who would prefer we weren’t paying attention; things are rarely hidden for the sake of being hidden.

From the largest gatherings of political powers on the future of global ecology to the environmental maladies laid at the feet of small rural communities that aren’t expected to say much, it is important that silence isn’t encouraged. There is no advocacy in silence. There is no remembering in silence. The small island nation of Tuvalu, who became a household name through advocacy at COP15, is about to vanish due to the rising seas, and uses its little might to assert that it doesn’t want to be forgotten while the larger nations jabber. This example is most compelling because it was the closest to a pure voice that exists in these political talks. It is not talking about the threat to its economy, but simply survival.

We could start to talk about any number of instances where advocacy is needed. The Bhopal incident in India was only recently revisited when Dow Chemical bought Union Carbide and had to answer questions about this tragedy. In order to appeal to developers, structurally sound public housing projects were closed in New Orleans after Hurricane Katrina. The list goes on in terms of injustice and ecology, and a lack of advocacy predicated on environmental grounds.

This is what makes Song of the Bird King so important. It is an effort to amplify the voices of those affected by the over-fishing, commercialization, and subsequent acidification of Lake Sebu in the Philippines. But it also shows use the problematized arena that art must step into. It is easier to talk about the negative environmental impact of an action. There are more metrics for the destruction of habitat and ecosystems than the cultural consequences; We can talk about sea levels rising. We can talking about the annual fish kill of a body of water. We can talk about the toxicity of particulates in the air. But we cannot empirically state the effects on a population and how this affects its culturally sustainability.

We live in a world where so many are culturally and geographically disconnected from their lands of origin that we rarely consider the importance of place to people. As Susie and Roberto’s documentary notes, only four percent of populations live indigenously. But we find it difficult to even understand the connection of people to their non-indigenous homes, like the farming communities of California’s Central Valley or those displaced by Hurricane Katrina. When a storm is coming, we ask, “Why don’t people just move out of the way?” without valuing a personal or a cultural attachment to place.

This is the root of ecojustice, providing fairness to a person’s or people’s habitat, and, while images of drowning polar bears are heartbreaking, helping us recognize our humanity in environmental issues. Balkin’s work highlights those we don’t see in an area we see as vacant — the “away” where we keep throwing everything. We forget about the tragedies like Bohpal that continue to affect lives discarded by corporations on the other side of the globe. Who knew about the small islands in the Pacific until their inhabitants spoke up? Tuvalu and others are merely tropically anomalies with little to exploit. And, in Song of the Bird King, Susie and Roberto have the vision to look at Lake Sebu, not just as environmental issue, but one of those rare places still connected to a culture and people.

Song of The Bird King | Ian Garrett speaks about Art and Eco-Justice.