Superhero Clubhouse: the Call to Grow Theater – The Brooklyn Rail 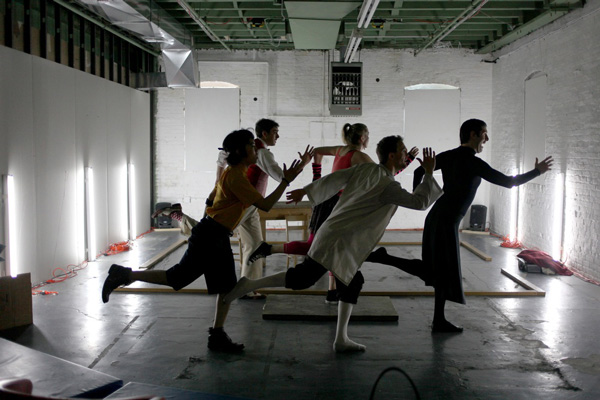 …This type of question isn’t always asked, but for Superhero Clubhouse, it’s de rigeur.  Founded in 2007 by Jeremy Pickard, Superhero Clubhouse is a “society of theater artists engaged in making original plays and events about the natural world via a green and collaborative process.”  How they make their work is equally as important as the subject matter itself.  A rehearsal room populated with handheld devices may be a solution to printing multiple versions of a script, yet it is also a manner of developing work with more fluidity.  They’re measuring multiple efficiencies here as they constantly tackle large-scale issues: water pollution, mercury poisoning, ethical food production.  In the process, they’re also examining an issue that theater artists are only just starting to acknowledge: how the act of creating theater can be so inherently wasteful.  For Jeremy a play is “a way to realize or actualize the conversations we’re having about bigger issues.”

via Superhero Clubhouse: the Call to Grow Theater – The Brooklyn Rail.

January 31, 2010newsArt Environment, Art Practice, Cape Farewell, Centuries, Change Students, Contemporary Art, Critical Area, Critical State, Daro, Dramatic Change, Eden Project, Environmental Issues, Environmental Movement, Falmouth Ma, Natural Environment, Professional Artist, RSA Arts & Ecology, Subject Matter, Sustainability Institute, University Of Exeter
University College FalmouthMA Art & Environment: 2010
For centuries artists have interpreted and represented the natural environment. It has provided materials and subject matter, as well as inspiration and knowledge. In recent times – particularly since the growth of the environmental movement – there has been a dramatic change in our understanding of the many ways our society impacts upon the Earth. This awareness has galvanised around the fact that the relationship between humanity and our life-giving planet is in a critical state.

This change in knowledge has been reflected in contemporary art practice. MA Art & Environment, at University College Falmouth, encourages a focused engagement with ecological and environmental issues. Designed to give students the skills, expertise and confidence to operate as a professional artist in this critical area of practice, the course will also enable them to develop strategies and practices that use art as a cultural agent – as a tool for knowledge, understanding and change.

Students on the course have opportunities to benefit from the Universtity’s relationship with Cape Farewell, The Eden Project and University of Exeter’s Environment and Sustainability Institute.
For further information please
contact Dr Daro Montag
daro.montag[@]falmouth.ac.uk
+44 (0)1326 211077
www.falmouth.ac.uk

How the arts came together over climate

June 10, 2009news, RSA Arts & EcologyArray, blog, Climate, Ecology, Environment Agenda, RSA Arts & Ecology, Subject Matter
[Crosspost from the Respond! blog] With over 60 events listed in Respond!, it’s clear that there is a huge amount of activity going on in the arts which tackles the environment agenda.

A few key players helped nudge the arts scene towards this subject matter. In a new interview for the …

I’ve posted an interview with the poet Jen Hadfield up on the main site. I’ll admit I hadn’t even heard of her until she won the T S Eliot Award a few weeks ago, but Nigh-No-Place turns out to be really great for its vivid, unruly, close-up-view poems about life in the back-0f beyond.

Two things I found intersting: Hadfield is, self-admittedly, a poor reader. Despite a love of language, she finds getting through novels hard. Which is one of the reasons why she graviates towards poetry.

Also, by her own admission again,  she doesn’t have a single political bone in her body.

I’m almost alarmingly apolitical, which is something I have anxiety about in the same way as I do about the reading thing. I think that I’m not political is possibly partially about the generation I come from but also to do with me as a person.

But it’s inevitable that anyone with Hadfield’s subject matter becomes political, in the sense that – as Siân Ede was saying – nature is no longer just out there as the ineffable, unstoppable force. “It is tainted. It is sad. It is ending.” It’s something broken, and if you write about it now you are

inevitably writing about catastrophe. Hadfield sees herself as writing from within the ecopoetic tradition, but with that modern knowledge:

It’s not just about people going out into the landscape and looking at it. “Oh how lovely and interesting and possibly sublime!” There’s an anxiety in there as well about how it’s changing and about how we make ourselves at home out there, how we impact on it.

Collaboration in the face of chill winds

This week has brought profound jolts with respect to political and economic predictions on climate change, the first from Rajendra Pachauri, leading the Inter-governmental Panel on Climate Change (IPCC). He seriously doubts that the US will be able to make the pledge needed on carbon reduction. This is frightening given the latest revision on sea levels which has been given wide press coverage this week. Scientists think their rise will be nearly twice as much as they previously reckoned, which would be disastrous for an estimated 600 million people (the UK population was 60.5 million in 2006).

This is why increasing numbers of artist and arts organisations are focusing on the Arctic and the Antarctic for their subject matter.

The most recent exhibition relating to the Antarctic is at the National Glass Centre in Sunderland. You have until 29 March to visit it. Anne Brodie has created a chandelier using a huge block of ice from the Antarctic lit not by electricity but by bacteria. It’s creativity and collaboration that we need and Brodie’s work is an exemplar of both, supported as it is by the British Antarctic Survey, Arts Catalyst and Arts Council England as well of course by the National Glass Centre – together presumably with the advice and support of scientists and technicians.

Anthony Giddens wrote in The Guardian on Wednesday 11 March of the “collaboration essential to coping with climate change” (more on this in his new book The Politics of Climate Change which will be available in a week’s time). It’s collaboration – relationships – which makes me sure that the word “ecology” is the right one for our centre here and of which we need so much more. We have a lot to learn on the subject from artists.