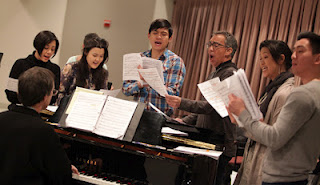 A unique event took place at 69 theatres across the United States on March 11, the one-year anniversary of the devastating Japanese earthquake.  Called SHINSAI – the Japanese word for an earthquake disaster – it was a series of readings of ten-minute plays to raise funds for the Japan Playwrights Association.

Some theatres held one or two readings before their normally scheduled productions; others made an evening of presenting many of the plays and songs put together for the event.  More than half of the plays have to do with the environmental disaster in Japan. To read the plays, register here

The Theatre Communications Group helped to organize SHINSAI. Japanese and American playwrights wrote works for the event; Stephen Sondheim and John Weidman reworked two songs from their 1976 musical Pacific Overtures. All plays were to be presented only on March 11.

National Public Radio did a story, which you can hear here.

Theater artists in Japan, centered around those living in the Tohoku region that was devastated by the great earthquake and nuclear accident, extend our hand to theater artists around the world to rebuild Tohuku and Japanese society, restoring the conditions that surround the art of theater, such as environments for creative activity, theater buildings, companies, rehearsal spaces, education and audiences.  We seek to work with our international peers to demonstrate the potential of human beings and the theater to overcome adversity as well as the primordial power of expression on stage.