How did vast heaps of industrial waste become the pride of a community? | Ian Jack | The Guardian 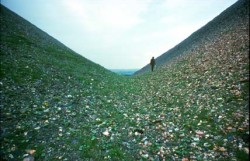 Ian Jack’s comment in the Guardian How did vast heaps of industrial waste become the pride of a community? | Ian Jack | Comment is free | The Guardian on the role of industrial spoil heaps in the Scottish landscape is interesting for the history as well as for an error, an omission and an elision.

Jack draws out the important history of oil production in the landscape west of Edinburgh, it’s scale and its slow demise as other forms of oil production came ‘on stream.’  He’s probably profiled this because of the current debates around fracking in the UK and in fact nearby in Scotland (and perhaps also in relation to Tar Sands in Canada).

First the error – the bing he climbs should not be called Greendykes.  To me, and I see them from the train to Edinburgh pretty frequently, the big one is called the Niddrie Woman and the one they are digging away the Niddrie Heart, and this is because of Jack’s omission.  Whilst he does provide a history lesson, he misses out the art history part of the lesson.  In 1975 the artist and co-founder of the Artist Placement Group, John Latham, undertook an initial period of work at the Scottish Office in Edinburgh during which he proposed that seven bings across West Lothian should be regarded as ‘process sculptures’  (see APG Chronology on Tate website here and Craig Richardson’s analysis here).  This work was included in an exhibition at the Tate the following year and the catalogue is accessible here.

The eventual classification of Greendykes (not the whole cluster of four bings re-imagined by Latham as the Niddrie Woman and various parts of her body) and the Five Sisters as historical monuments was conceived of by Latham as a much more significant process of making sense of the landscape than the eventual bureaucratic action of ‘scheduling.’  Richardson articulates the aesthetic in terms of Gustav Metzger’s auto-destructive art and also notes the multiplying layers of signification since the site has now additionally been identified as supporting an unique biodiversity.

Jack’s elision is at the end when he suggests that the Victorian’s just got on with stuff and didn’t worry about creating an enormous shale bing.  By implication Jack is suggesting that perhaps we shouldn’t worry too much about the impact of fracking and other extractive industries on the ecosystem (and note I first wrote ‘landscape’ and struck that out because it concerns the visual quality whether pastoral and picturesque or sublime.  I then wrote ‘environment’ and struck that out because it puts us at the centre of any considerations.  So in the end we have ecosystem because that at least captures to complex constantly changing interactions between living things and places temporarily setting aside human-centred subject-object relations).  Just because the shale bings of West Lothian are now valuable sites of biodiversity after the fact does not in any ethical system constitute a rationale for continuing with similar actions.

I’d ask Ian Jack to pause and reconsider the advice he’s giving on environmental ethics (and here the word is useful because the point is precisely our relations with our environment – our actions and their consequences).  These are incredibly important sites precisely because we can see the consequences of extractive industries, we can discover the development of thinking about what is art and what it can be, and we can explore an amazing landscape.  We must also give careful consideration to the choices around how use land, we make energy and what we do with limited resources needed not just by us, but also by other inhabitants of ecosystems and places from the local to the planetary.

ecoartscotland is a resource focused on art and ecology for artists, curators, critics, commissioners as well as scientists and policy makers. It includes ecoartscotland papers, a mix of discussions of works by artists and critical theoretical texts, and serves as a curatorial platform.
It has been established by Chris Fremantle, producer and research associate with On The Edge Research, Gray’s School of Art, The Robert Gordon University. Fremantle is a member of a number of international networks of artists, curators and others focused on art and ecology.