On May 6, 2011, H20: The Art of Conservation, at the Water Conservation Garden, San Diego, CA, will open to the public. Green Public Art reviewed over 1100 artists portfolios before inviting 14 San Diego artists to participate in the exhibition which offers San Diego homeowners an artistic alternative to incorporate water conservation into their own garden spaces. Green Public Art awarded each artist a mini-grant to develop their site-specific sculptures. In the weeks leading up to the exhibition opening the artist’s concepts will be revealed on this site. Questions? Contact Rebecca Ansert, Curator, Green Public Art at rebecca@greenpublicart.com. 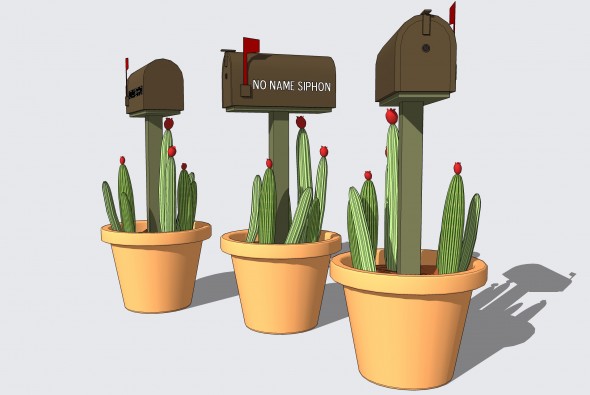 CONCEPT: Special Deliveries is a series composed of three sculptures with solar powered mechanical peephole dioramas within. From the exterior each piece presents itself as a rural curbside mailbox mounted to a piece of plastic lumber and planted in a terracotta pot along with some cacti. The interiors feature unique dioramas depicting historic moments in various water reclamation projects of the western states. The viewer looks through a peephole and lowers the flag on the mailbox to activate the scene within. The pieces represent the construction of the Hoover Dam, the accidental creation of the Salton Sea, and the attack on the Los Angeles Aqueduct in Owens Valley.

ABOUT: Matthew Hebert creates work that deals with technology and its effect on the domestic environment and our sense of space. His work takes recognizable furniture forms and layers new forms of use and meaning into them. Ultimately, the work generates new forms of interaction between the object, environment, and the user. Matthew received his Bachelor of Arts in Architecture from the University of California, Berkeley; and his Master of fine Arts at California College of the Arts. He has taught at several schools including the University of Wisconsin-Madison, CalArts and the School of the Art Institute of Chicago. He is currently Assistant Professor of Furniture at San Diego State University. 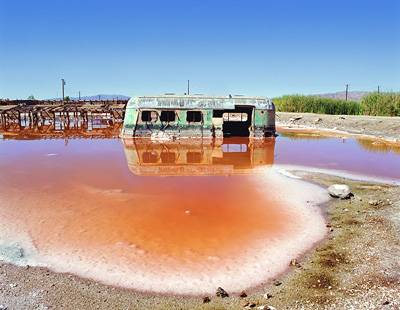 Many innovative approaches to form and content are evolving in contemporary arts practice that transcend traditional boundaries of art making. Many artists are integrating various field and research strategies borrowed from the natural sciences, geography, and other disciplines to create rich interdisciplinary works of art that are often collaborative and experimental in nature. The interdisciplinary nature of these art works encourages a diverse and varied audience.

This honors seminar course (HONORS 413 Section 02) scheduled for Fall 2010 at San Diego State University will be centered around focused readings, discussions, presentations, screenings, and field trips. Students will conceive and execute a final project proposal that may take the form of a hybrid documentary, temporary site-specific artwork or installation, digital multimedia feature, performance, text, or other work that addresses social, cultural, environmental, geographical, and/or political issues of a local or regional ecology, site, or subject. Special emphasis will be placed on projects that are collaborative, incorporate sustainable design strategies, promote environmental awareness through education, and/or directly encourage audience participation. Projects, possibly collaborative in nature, will be distilled, executed, and documented at the conclusion of the course. A background in art is not required to take this course. Students from all academic and disciplinary areas are encouraged to apply.

The course will culminate in an immersive three-day weekend field study workshop at the Salton Sea scheduled for the weekend of November 19 – 21, 2010. During this workshop students will be able to directly experience and respond to place over an embedded field research period.  Visiting artist/architect,Chris Taylor, director of Land Arts of the American West at Texas Tech, will join us for this weekend field experience. Students will be prepared before embarking on the field trip through readings and presentations on diverse topics related to the site including but not limited to regional water politics, agricultural/real estate economies, local ecologies, military presence, tourism, outsider art, fringe subcultures among others. A culminating art exhibit and publication will be organized to document student interdisciplinary projects resulting from this course and workshop.

via Art, Environment, and Place.

Water, CA grew out of our mutual connection to the Salton Sea.

The largest lake in California, the Salton Sea is bound by a sordid history of unchecked development and foreseeable natural disaster. In the 1920’s, land developers gambled on plots of land surrounding a flash-in-the-desert resort. After two major floods, the landholders could trade their chips only for the bleached bones of tilapia that now cover the neglected sea’s shore. Miles of developed plots, with electrical and plumbing piped in, now sits abandoned. Popularly referred to on the Internet as the only “manmade mistake visible from space, the Salton Sea has become a symbol for the mis-engineering of water on a galactic scale.

However, the remaining residents of Niland, Salton City, and Bombay Beach refuse to give up on their marginal communities. In Chris Metzler and Jeff Springer’s documentary Plagues and Pleasures on the Salton Sea (2006), local holdouts traverse the Colorado Desert shores in golf carts, sharing mid-morning cocktails and fond memories of the great parties of the past. They are articulate about their shared history on the sea. They share a mythology, as well, extolling the healing properties of the salty, wine-colored water. Such awareness of the water that connects them and holds them close is unusual in the West. But then, this sea calls to mavericks.

The Salton Sea also calls to artists. Its sublime, apparitional presence in the middle of a desert at the foot of the stark Chocolate Mountains, anchoring hot,dry borderlands, is the perfect end for the San Andreas Fault. Photographers, painters, and writers describe the abandoned resort structures, outstanding vernacular architecture, and the spectacular sense that here something reveals what is often hidden. History shakes off the palimpsest of progress.

Although its re-creation may have been wildly accidental, the survival of the Salton Sea is vital. Even as the structures on its shores decay in a picturesque soup of salt and rust, the sea serves as a last refuge to many species of birds. It shakily stands in for wetlands now covered with the asphalt of Los Angeles, Orange, and San Diego Counties.

Perhaps it is this familiar state of watershed paradox—infused with apocalyptic splendor, fueled by myth, forged in the violence of dams, and swamped under secret decay—that inspires so many artistic investigations into California’s water.

The projects featured in Water, CA delve into buried histories, uncovering convergences and unexpected connections. They revive dead languages, speaking words in ways that signify forgotten meanings. They meander down unexpected paths, reminding us of the joys of discovery. They are gentle, yet forceful, warning us of the impossibility that became California’s water.

Best described by Marc Reisner in Cadillac Desert, California’s water policies over the last 150 years directly manifest the mythology that made the West. “Clouds follow ploughs, the notion that tilled earth would create moisture, sent American settlers West with magical thinking. Unusually wet weather patterns temporarily supported the theory that the bustle of settlers and the noise of imperialism would create moisture clouds and alter the climate. Dynamite exploding in arid skies to create clouds set the tone of the century. The superhuman irrigation of a “semi-desert with a desert heart” (Reisner) shaped the politics of the world.

As the landscape was reengineered, so was language. One can track the cultural consciousness of water through the shifting vocabulary of the 20th century. “Conservation” once meant exploiting every possible resource for human use. “Waste” was letting water reach the ocean unhindered. “Reclamation” required draining lakes and moving wetlands off the land.

Along with the riparian areas, the watershed citizen has become dislocated. In a 19th century business strategy of supporting private concentrations of power and wealth through land development, water ended up as state property. As citizens, we have lost our connection to where our water comes from, where it goes next, and what is sacrificed along the way. What is at stake is the evaporating illusion of our civilization.

Each of these acts of art resensitize us to our environment, remind us of lost histories, and reenvision our communities. In an age where “green” has become just another corporate branding strategy, artists offer new strategies to affect social change. The collected works of Water, CA inspire us to break from isolation, seek out hidden links, and amplify quiet voices.

In 2010, beyond the hot, pungent beaches strewn with bones and dying birds, the ruins of Salton Sea resorts continue their slow decay. As California faces multiple simultaneous crises, the abandoned gated communities that surround the Sea silently demonstrate the disastrous intersection of economic failure, real-estate collapse, and misunderstanding of local water. Water, CA offers us an opportunity to restore our vision of local ecology, so that we may create a different story for California’s water – a sustainable future.