FRACKING: Art and Activism Against the Drill 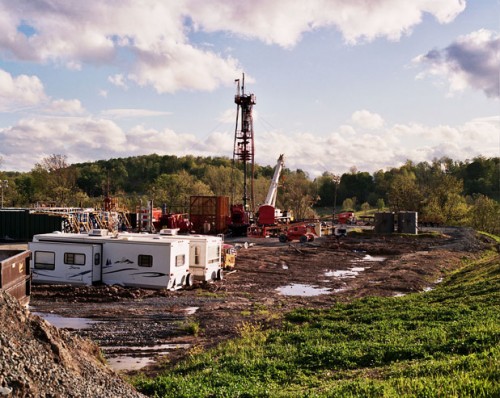 NEW YORK – Exit Art announces Fracking: Art and Activism Against the Drill. Hydraulic fracturing (“fracking”) is a means of gas extraction that accesses gas trapped more than a mile below the earth’s surface. This exhibition, a project of SEA (Social Environmental Aesthetics), will expose this process of gas extraction that is contaminating water supplies worldwide. Through documentary videos, photographs, commissioned works, public responses and literature, it will engage the public in dialogue on this issue through public lectures and calls to action and encourage audiences to continue educating themselves and their communities on fracking and its detrimental effects.

Exit Art invited the public to respond to the issue of fracking by submitting a postcard through the mail with original artwork on one side and a written statement on the other. The dozens of responses we received will be on view, forming a collective call to end fracking; postcards will be accepted throughout the run of the exhibition and will be added as they are received.

Hydraulic fracturing (“fracking”) is a means of gas extraction that accesses gas trapped more than a mile below the earth’s surface. When a well is fracked, small earthquakes are produced by the pressurized injection of millions of gallons of fresh water combined with sand and chemicals, releasing the gas, as well as toxic chemicals, heavy metals and radioactive materials that contaminate air and water.

The Energy Policy Act of 2005, passed under the guidance of then-Vice President Dick Cheney, exempts fracking from the Safe Drinking Water Act and major provisions of other protective laws, virtually eliminating the gas industry’s liability and E.P.A.’s regulatory oversight. Exemption from the Community Right to Know Law also absolves the gas industry from being required to report the actual chemicals used in the drilling processes—chemicals that can severely contaminate the water supply and cause serious illnesses. A drilling moratorium is in effect in New York State until the D.E.C. issues fracking regulation, potentially paving the way for drilling to commence in New York in 2011.

Fracking and Its Effects: A Panel Discussion

This panel discussion brings together leading experts and activists on hydraulic fracturing, representing multiple facets of this issue.

Mark Ruffalo is an actor, director, producer and screenwriter. He is also a vocal critic of hydraulic fracturing, having recently appeared on The Rachel Maddow Show to discuss the issue and the 2009 FRAC Act.

Tracy Carluccio is the Deputy Director of the Delaware Riverkeeper Network. She has served on several township boards, inter-municipal steering committees and community organizations related to issues of water and environmental preservation.

Al Appleton is the former Commissioner of NYC’s Environmental Protection Agency and an international expert on water issues. He is also a Senior Fellow at the CUNY Institute for Urban Systems and an international consultant on issues of watershed and water utility management, financing, and land use.

Michel Boufadel is the Professor and Chair of the Department of Civil and Environmental Engineering at Temple University and the Director of its Center for Natural Resources Development and Protection. He is one of the nation’s foremost experts on oil spills and the Marcellus Shale natural gas deposits.

Michael Lebron is the key figure behind the collective lawsuits in Dimock, PA and is currently working with citizens of Bradford and Wyoming Counties, PA. He is also a spokesperson for litigants in cases related to hydraulic fracturing.

Joe Levine is the co-founder of NYH20 and Damascus Citizens for Sustainability, a grassroots nonprofit organization dedicated to protecting the Upper Delaware River Basin from the ravages of deep-shale gas extraction and the threat posed by the natural gas industry. Visit http://www.damascuscitizens.org.

Christy Rupp is an artist and activist who has exhibited in solo and group exhibitions internationally since 1977. Her most recent body of work deals with fracking, mountaintop removal and oil drilling in the Amazon.

“Gasland” is a documentary film directed by Josh Fox that focuses on communities affected by natural gas drilling. It was released in 2010 and premiered at the Sundance Film Festival where it won the Special Jury Prize.

Exit Art is an independent vision of contemporary culture. We are prepared toreact immediately to important issues that affect our lives. We do experimental, historical and unique presentations of aesthetic, social, political and environmental issues. We absorb cultural differences that become prototype exhibitions. We are a center for multiple disciplines. Exit Art is a 28-year-old cultural center in New York City founded by Directors Jeanette Ingberman and artist Papo Colo, that has grown from a pioneering alternative art space, into a model artistic center for the 21st century committed to supporting artists whose quality of work reflects the transformations of our culture. Exit Art is internationally recognized for its unmatched spirit of inventiveness and consistent ability to anticipate the newest trends in the culture. With a substantial reputation for curatorial innovation and depth of programming in diverse media, Exit Art is always changing.

SEA is a diverse multimedia exhibition program that addresses social and environmental concerns. It assembles artists, activists, scientists and scholars through presentations of visual art, performances, panels and lecture series that communicate international activities concerning environmental and social activism. It provides a vehicle through which the public can be made aware of socially- and environmentally-engaged work, and a forum for collaboration among artists, scientists, activists, scholars and the public. SEA functions as an initiative where individuals can join together in dialogue about issues that affect our daily lives. Conceived by Exit Art Co-Founder / Artistic Director Papo Colo.

General exhibition support provided by the Andy Warhol Foundation for the Visual Arts; Bloomberg LP; Jerome Foundation; Lambent Foundation; Pollock-Krasner Foundation; New York City Department of Cultural Affairs and City Council Speaker Christine C. Quinn; and public funds from the New York State Council on the Arts. We are grateful to Damascus Citizens for Sustainability and Delaware RiverKeeper for their help and expertise in the complex issues of fracking.