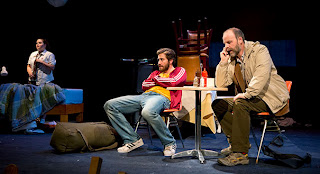 If There Is I Haven’t Found it Yet, with Brian O’Byrne and Jake Gyllenhaal, opened in New York’s Roundabout Theatre in September and runs through 25 November.  It was written by Nick Payne, and inspired by his reading of Heat by George Monbiot, about decreasing one’s carbon footprint.  Payne saw that many authors of environmentally-themed books had dedicated them to their children, and it gave him the idea of a father trying to save the planet in order to make the world a better place for his children, and beyond.  But the father is so wrapped up in his work that he fails to notice the problems within his own family.  The New York Times review is here.

On one level, we are watching a domestic drama play about a mother, father, daughter, and uncle.  But the play also takes on a much bigger global issue.  We all want to do the right thing for both the world at large and for the world of our own family, but maybe that’s impossible.