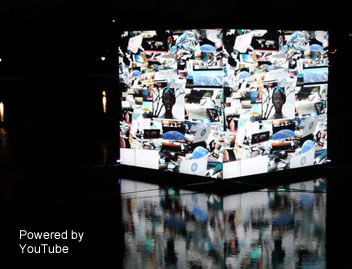 YouTube provided the technology to power the cube and is continuously streaming videos into this international communications platform; Obscura Digital’s technologists and designers created the visual content and employed a number of software techniques to help visualize CO2 on the cube; and Millennium ART harnessed this customized media system to transform carbon dioxide facts and figures into an inspiring aesthetic experience helping people visualize the invisible… what 1 metric tonne of CO2 looks like, which is the amount of CO2 the average American emits into the atmosphere every two weeks. The United Nations Department of Public Information activated the CO2 Cube as a vehicle to attract, engage, and mobilize the public in reducing CO2 emissions locally and globally.YouTube videos about climate change are brought to life on the facades of the 27ft x 27ft x 27ft cube through an array of artistic transition techniques, such as DNA strands, CO2 molecules, and many more. “YouTube is delighted to be the technology partner for the CO2 Cube and to bring to life in a new and innovative way the video content created by citizens, filmmakers, NGOs and activists to address the important issue of climate change,” stated Chris Di Cesare, Chief Marketing Officer of YouTube.

“Obscura has deployed a 4-D Hypercube User Interface System as a dynamic media portal that is capable of presenting web based, real-time, and produced content integrated into the CO2 Cube public art sculpture, offering new dimensions for audiences to interact with visual concepts and content sources from around the world,” said Travis Threlkel, Creative Director of Obscura Digital.

The United Nations Secretary-General, Ban Ki-moon premiered his public announcement to Copenhagen via video on the CO2 Cube during an on-site reception. “This cube shows 1 tonne of carbon dioxide. Science has made it clear, we have a chance here in Copenhagen to turn the tide, to cut emissions, to help people adapt. We know what to do, all we need is the political will,” announced Ban Ki-moon, UN Secretary-General.

The cube is constructed of 12 shipping containers stacked in an interlocking pattern on a custom engineered floatation barge. Two sides are covered with an architectural mesh fabric for video projection illuminated with Obscura Digital’s FireFrame graphic and digital media system, while the other sides remain as open exposed shipping container surfaces with LED lighting design by The Do Lab. “Using motion graphics, 3-D animation, and live action, we were able to communicate the impact CO2 has through both literal and abstract visualizations; also keeping in mind the architecture of the physical cube and reflections on the lake as canvases for our media” stated Ron Robinson, Art Director at Obscura Digital.

“The beauty behind this work of art is the collaborative spirit, will and determination that went into creating something that is an artistic and architectural feat, designed to inspire change in the hearts and minds of people across all geo-political boundaries” expressed Mia Hanak, Executive Director of Millennium ART. CO2 CUBES: Visualize a Tonne of Change is a Millennium ART installation presented in partnership with the United Nations Department of Public Information, powered by Google and YouTube and produced by Obscura Digital. This is a CO2 neutral exhibit.

View the video from the opening celebration of the CO2 Cube.

View the United Nations Secretary-General, Ban Ki-moon premiering his announcement to Copenhagen via the CO2 Cube.

Bring on the electric cars?

Last week in New York the sculptor Seth Kinmont unveiled the first of three electric cars, bodywork made from wood. For three days he invited people to ride around the block in his new hand-built horseless carriage. Beautiful, huh?

I mention this because a) it forms a tenuous artistic link to the following story, and b) Kinmont’s work underlines the quixotic nature of electric transport.

The latest voyagers on this quixotic journey are Jeff Hoon and Peter Mandelson. Today they will announce a £250m scheme to kickstart the UK’s electric car infrastructure.  You might think they’re unlikely travellers on this road, given the fact that this are the pair who were most vocal about the impracticality the green movement’s objections to Heathrow expansion.

But no, Geoff Hoon in particular has retooled himself as the champion of green in this morning’s Guardian.

The implication is that electric cars will help cut that figure. And they might, but… Big but.

As a recent report commissioned by the Campaign for Better Transport suggests, if everyone in the UK moved to electric cars we’d need four times as much capacity in our electricty generation than we have at present, and even the government’s recently unveiled plans for nuclear generation aren’t enough to plug that gap.

Even a modest rise in electric car use doesn’t automatically reduce CO2 emissions – it just shifts emissions from the exhaust pipe to the power station. For those who use their cars only for short urban journeys, the CO2 reduction can be significant, but for average car use the figures are much less clear cut.

A few weeks ago the government let it be known that they were considering a scheme to encourage people to buy greener cars by offering an incentive for people to scrap their old ones. In reality, this was an attempt to boost the UK’s failing manufacturing sector, not a green scheme; given the embedded carbon costs of manufacturing, scrapping working cars in favour of newly built ones is about the least green strategy of all. That embedded energy calculation is the same for electric cars too.

This initiative is the start of Gordon Brown’s much touted green recovery plan; for a cabinet who have dismissed green concerns as impractical, they’re going to have to work extremly hard to demonstrate that this really is a practical scheme, not just another sop to industry.

Hat tip to Bad At Sports for the Seth Kinmont story.