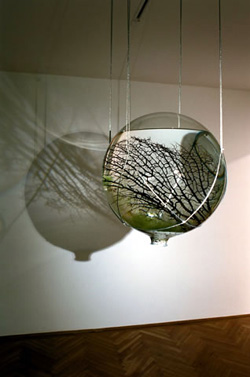 The 2010 Symposium on Sustainability and Contemporary Art brings together artists, philosophers, environmental scientists and activists to explore the conundrum of capitalism’s remarkable ability to absorb criticism and adapt to new circumstances. According to post-Fordist theory, in the wake of the social upheaval of May 1968 capitalism was able to recuperate radical desires for freedom, creativity and personal liberation through the adoption of the principles of flexibility, horizontality and autonomy, and the shift from industrialism to immaterial labour.

Today, the energy and idealism of the environmental movement is arguably in a similar danger of being transformed into the motor of a green capitalist resurgence that threatens to rescue neo-liberal globalisation from the economic downturn. This symposium asks whether environmentalism is in fact now facing its own ‘post-Fordist moment’, in which the language and values of ecology are at risk of being turned into an ideology of bureaucratic control and a technocratic justification for sustainable growth. It also raises the question of whether the environmental movement has anything to learn from the strategies of resistance proposed by the theorists of immaterial labour and the exploration of these issues by contemporary artists.

In the wake of the debacle of the Copenhagen Climate Summit, the question arises whether there might be more to ecological crisis than mitigating the threat posed by climate change to the current global economic system, and whether the danger posed by the depletion of natural resources and the destruction of bio-diversity deserves to be a greater priority. The symposium will try to locate a sense of eco-criticality in the approaches of contemporary artists, and also consider the implications of an ecologically-nuanced, post-Fordist critique for the international art world.

The symposium on Art, Post-Fordism and Ecological Critique is the fifth in an annual series of events organised at Central European University by Maja and Reuben Fowkes of Translocal.org, the Department of Environmental Science and Policy, and the Centre for Arts and Culture at CEU. This year’s programme will include an afternoon of presentations and critical conversations in the main auditorium of Central European University on Friday 19 March, and a workshop event with symposium participants on the following day.

A small number of additional places are available for the workshop upon application.