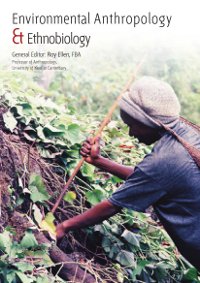 In order to move global society towards a sustainable “ecotopia,” solutions must be engaged in specific places and communities, and the authors here argue for re-orienting environmental anthropology from a problem-oriented towards a solutions-focused endeavor. Using case studies from around the world, the contributors—scholar-activists and activist-practitioners— examine the interrelationships between three prominent environmental social movements: bioregionalism, a worldview and political ecology that grounds environmental action and experience; permaculture, a design science for putting the bioregional vision into action; and ecovillages, the ever-dynamic settings for creating sustainable local cultures. 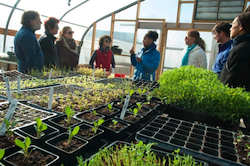 In December, Dance Exchange hosted Amara Tabor-Smith, our first Green Choreographer-in-Residence. Amara and her collaborator Sherwood Chen spent a week with Dance Exchange artists exploring sustainable food practices and food justice. Amara’s residency, which took place in our studios, as well as at sites like Eco City Farms in Edmonston, MD, culminated in a Thursday night HOME event featuring a potluck dinner and reflections on food and family. Visit Dance Exchange’s Facebook page to view more pictures from the residency.

Jill Sigman, of New York City, is our second Green Choreographer-in-Residence and will be in residence from January 28-February 1, 2013. Sigman will explore principles of permaculture and engage in hands-on work with small living systems, and this research will inform the development of movement scores and improvisational systems for use in her work The Hut Project, a series of site-specific structures built from trash. Sigman will share her methods and research in her HOME event on Thursday, January 30th from 7:00-9:00pm, and teach FRIDAY CLASS on Friday, February 1st from 9:30-11:15am.

Now! This year the EuPC will focuss on Earth Care, People Care, Fair Share in August. For five days 300 activists and designers gather together to start a dialogue on permacultures. Interdisciplinary workshops, lectures and art will be part of the program and will promote European networking and grand celebration.

EuPC stands for ideas themselves, not only for  financeable ideas. Communication is more important than reactions of others.

Speakers from all over the world will dedicate their focus on methods and the design of transition processes. Workshops on many different topics such as Deep Ecology, Wandelnde Gärten and Social Sculpture will be held in Englisch and German.

Adjacent to the Convergence, the traditional international Permaculture Design Course takes place in Kassel: Its challenge is to bring in ‘Permaculture, Art & Society’ as an innovative focus and approach.

Tickets and more Information can be found on the website of  EUPC or in the leaflet. 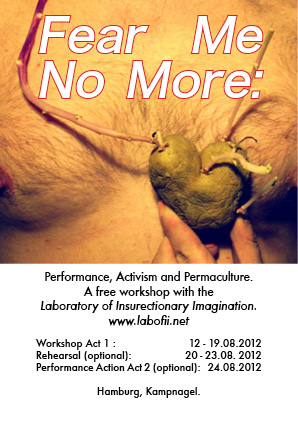 Fear Me No More: Performance, Activism and Permaculture. 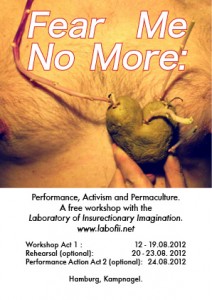 A free workshop with the Laboratory of Insurectionary Imagination.

Join us in an intensive workshop merging performance, activism and the design science of Permaculture run by the infamous artivist collective The Laboratory of Insurrectionary Imagination.  Held as part of Kampnagel’s Summer Festival in Hamburg, the workshop is Act 1 of What is Enough ? the Labofii’s 16th experiment. At the end of the workshop, participants will have the chance to perform in a live piece of art activism (Act 2 – Natural Revenge).

Fear Me No More aims to make productive connections between artists and activists within the framework of Permaculture. A set of tools for building a postcapitalist society, Permaculture teaches us to mimic the efficiency, diversity and resilience of natural ecosystems. This fulltime workshop is an ideal introduction for those wishing to explore new forms of creative resistance and horizontal politics.

“It reminds us of the time when it was still possible for free theatre to try out a loving anarchic social utopia… This is about saying goodbye to representation and is therefore the most radical form of theatre” -Frankfurter Rundschau.

For more information and application forms (deadline May 31st) click here. The workshop will be run in english.

What is Enough? is accompanied by the publication of our film/book Pfade durch Utopia (Paths Through Utopias) in Germany,  with Nautilus. 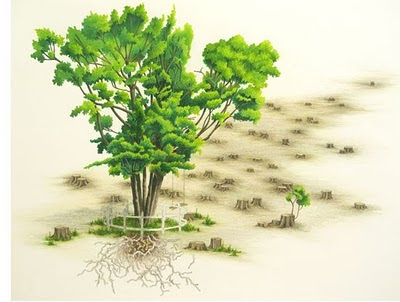 On Saturday December 12, 2009, New York artist Kimberley Hart gave a talk about her recent exhibition Scout at Mixed Greens in Chelsea. The event was co-sponsored by ecoartspace and NYFA.

Before mentioning any of the artworks in the show, Kimberley began by explaining that her new body of work came out of major life changes involving food and her interest around issues of agricultural sustainability. In the past few years, in an effort to eat healthy locally grown foods, she decided to give up all convenience foods and made a conscious effort to eat mostly organic foods. Kimberley feels that to a large part – many current environmental problems are due to our culture’s worship of convenience. To confront this dependence, Kimberley gave up packaged foods, ate strictly whole foods and eventually consumed only local and sustainably farmed food. She instituted a “no plastic” rule in her home which began with giving up bottled water and proceeded to take out containers, plastic bags and all plastic packaging. 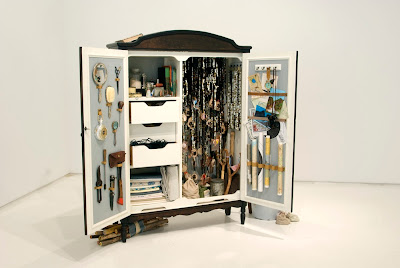 Kimberley was influenced by reading many current popular books on the food revolution such as Michael Pollan’s The Omnivore’s Dilemma which led her towards living a more sustainable life. She started urban homesteading, canning, composting, and cutting garbage down to one small bag a week. She joined a CSA, bought only grass fed, pastured meats and stopped eating out or ordering take-out. She is striving to have as small of a footprint as possible and is giving serious thought to starting a farm on a former cattle ranch in the South. This passion about food, sustainability, farming, and stewardship, led Kimberley to meet various people involved with permaculture and the transition movement, environmentalists and social justice advocates. She feels that as an artist she is coming from a different place but can potentially end up with similar and interrelated solutions.

In order to create this new show, Kimberley spent time contemplating a way to integrate her new outlook on life and focus on sustainability and self-sufficiency into her artwork. She decided to continue utilizing narrative and allegory as in her past bodies of work. Through drawing and sculpture, she exposes her alter ego represented as a mischievous, irreverent young girl who is 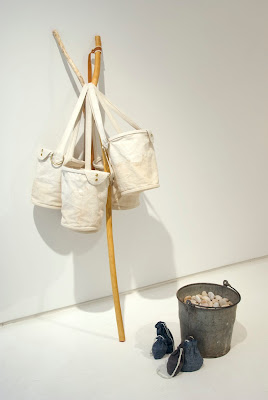 self-reliant but more vulnerable and suspicious than in years past. Though noticeably absent from the work, this girl was once full of sparkles and glitter. She is no longer fantasizing about her hunting prowess or setting traps for inappropriate prey. Instead, we find her hunkered down in an austere outpost with few essentials and a concern for an unknown adversary. There are vestiges of a carefree girlhood, but the tenor has changed—a sense of uncertainty has eroded her daring as she struggles to maintain some bravery in the face of a new, foreboding reality.

The works in the exhibition reveal her alter ego’s surroundings, shelter and possessions. A “bank” holds prized, as well as scavenged, provisions and doubles as a repository for a personal currency and objects to barter in this new world. Beautifully crafted, ominous vultures skulk and spread their wings near a pivotal piece titled, The Death of Sparkle. While Kimberley’s alter ego has proven to be equally prissy and cunning in past exhibitions, she is now overwhelmed by apprehensions and threatened by the malicious marauder responsible for Sparkle’s death.

Fantasy and fine craftsmanship remain hallmarks of her work, but the tone has shifted to reflect a change—both imagined and real—in her environment. There is a marked shift in her alter ego from mischief-maker of the vernal woodlands to a menaced and solitary defender in a dystopic landscape.

“In an allegory of our shared hopes and fears, an itinerant, young heroine and an elusive, predatory force struggle for prominence. Survival for these characters is symbiotic; their lives intertwine in a closed loop of cause and effect where the lonely girl, in the face of a malicious entity and in a degrading environment, maintains an acute sense of optimism through her own perseverance. This dystopian fantasy explores an uncertain future, an existence outside of modern convenience where subsistence is the primary concern. Referencing issues ranging from institutional critique, environmental stewardship, egalitarianism and our shared literary and visual culture, this work of speculative fiction offers a potential outcome to our current socioeconomic crisis. 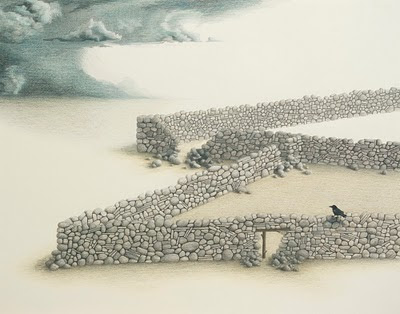 APInews: New in Places To Study: Art and Environment, WVU

New in CAN’s Places To Study database is “Art and Environment,” a course taught by Erika Osborne at West Virginia University in Fall 2009. The multidisciplinary graduate and upper-division undergraduate studio/seminar course is designed to increase awareness for the interactivity of studio artists and the environment, including studio work and extensive field activity. Students will address topics such as micro-ecology with soil scientist Jeffrey Skousen; astronomy with physicist Boyd Edwards; organic agriculture with Steve and Sunshine Vortigern of Round Right Farm; permaculture with landscape architect Ashley Kyber; Kayford Mountain (a mountaintop removal site) with Larry Gibson of Keepers of the Mountains; acid mine drainage with Amanda Lachoski of Friends of Decker’s Creek; and art in Antarctica with artist Chris Kannen.

via APInews: New in Places To Study: Art and Environment, WVU .