Creative Carbon Scotland, Collins and Goto Studio with Chris Malcolm, ecoartscotland and Art Space Nature are pleased to invite you to

Spirit In The Air

(refreshments will be provided)

Spirit in the Air is a visual art, technology and performance project exploring the impacts of the Edinburgh Festivals on climate change. Working with ground-breaking technology generously supplied by Gas Sensing Systems and Envirologger to measure real-time carbon dioxide (CO2) levels when Edinburgh is packed to bursting with artistic activity and people, eminent environmental artists Tim Collins and Reiko Goto will work with Chris Malcolm to ask ‘Can art change the climate?’

‘Carbon Catchers’ will roam the streets and parks of Edinburgh to seek out CO2 hotspots whilst the artists at the Tent Gallery use the measurements to make the invisible comprehensible through visual and sound works.

Spirit in the Air is part of the Edinburgh Art Festival and will be open Monday to Friday, 12 noon-5pm, from 2 – 22 August at the Tent Gallery on Westport, Edinburgh EH3 9DF. For more information click here.

In addition to the exhibition, a discussion programme curated by ecoartscotland will consider questions of art, science, activism and environmentalism in a Festival-long conversation.

Art, technology, activism and knowledge in the age of climate change (book here for this event)

Going beyond the material: Environment and Invisible Forces in the literary, performing and visual arts

ashdenizen: flowers on stage: the lungwort 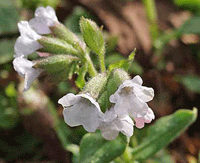 In the fourth of our summer series of blogs about flowers on stage, the artist Sue Palmer, writes about the lungwort (Pulmonaria).

I have a Pulmonaria ‘Glacier’from Brantwood in my garden; it comes up perennially in early spring with a pale white-blue flower. When it flowers, I think of the large house and rambling garden beside Coniston Water, the former home of writer, thinker and art critic John Ruskin.

In 2001, I created a site-specific performance project there. Brantwood is a significant tourist attraction with its open house and gardens, and I wanted to make a something unusual for the visitors that unravelled some of Ruskin’s philosophies and ideas, and to both work with, and challenge, the tourist culture. So I created a ‘tour’ of Ruskin’s Dining Room.

Visitors coming to Brantwood were offered the chance (free of charge) to come to a ‘special guided tour’ of the Dining Room, overlooking the lake. I began as an ordinary tour guide would, speaking about the objects and features, but over the 20 minutes, I evoked some of the extraordinary events that had occurred in that room, using three ‘elements’: salt, money and flowers.

Ruskin had published a book in two volumes in the late 1800s about plants and flowers called Proserpina. It went largely unrecognised at the time due to its eccentric collection of intensely detailed observations of plants and their processes, woven with passionate prose.

‘The flower exists for its own sake. The production of the fruit is an added honour to it – is a granted consolation to us for its death. But the flower is the end of the seed – not the seed of the flower.’

Ruskin’s writing was rich with religious and moral beliefs, with flowers as the emblematic fulcrum of beauty and resonance.

I scattered flowers – collected and dried from both Brantwood and my own garden – around the edge of the dining table. As I introduced Ruskin’s Proserpina, their perfume filled the room: roses, marigolds, camomile. Pinks, reds and yellows. Flowers normally contained and organised in vases now strewn over the table.

I invited the ‘audience’ to consider this: Charles Darwin had dined there in 1879. He was 70, Ruskin was 60. The discussion was probably rich, with Darwin speaking about the recurring struggle for existence, the mechanical process that had little or no reliance upon soul or will. And Ruskin passionate about his beliefs that nature did not exist by competition alone, that co-operation and ‘soul’ played crucial parts.

As the content of a conversation over 200 years old was evoked, next to the flower petals, I placed a circle of one pound coins: money laid down for Ruskin’s criticisms of capitalist ideology, of mechanisation and loss of craft. His highly influential writing on ‘value’ was laid out in his book Unto This Last. Gandhi had read this on a train journey in South Africa; it inspired him to direct action, to the Salt March and the collapse of colonial India. So into the centre of the table, I poured salt. Normally contained as a condiment, now salt was spilling over, the grains scattered on the money and in with the flowers.

At the end of my ‘tour’, I offered a ‘souvenir’ of the dining room to each member of the audience – a small bag containing either salt, a pound coin or some dried flowers. Not only did this reverse the usual order of purchasing a memento of the house, but it provoked a complex choice for each visitor: each one had value, significance, a use even, and each object was imbued with meaning. Most visitors I remember, chose the flowers.

via ashdenizen: flowers on stage: the lungwort.