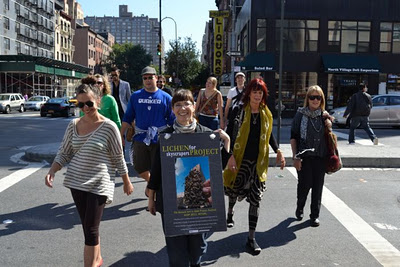 In early October in New York City during Art In Odd Places, a visual and performing arts festival sited in the public sphere along 14th Street from river to river, you just might have been lucky enough to take a walking tour with artist Elizabeth Demaray to visit her Lichen for Skyscrapers Project. For this project, Demaray sought to ameliorate the lack of native vegetation found in global cities by culturing lichen on the sides of skyscrapers and other manmade structures. The artist states “Lichen, a wonderfullyadaptable plant, can grow vertically on many porous surfaces. Once propagated,it forms a protective barrier, insulating its supporting surface from harmfulelements while serving to lower the cumulative temperature in metropolitancenters.” Lichen, which barely needs any water to survive, is an ideal plant for a public work project, and also is intended by the artist to remedy the urban heat island effect. It is known to lower temperatures by absorbing sunlight and reflects heat due to its color, while also making oxygen, and it doesn’t have any roots! 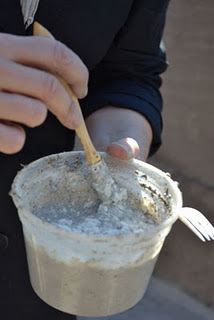 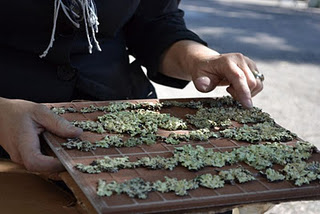 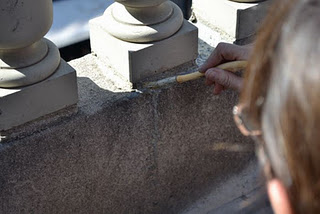 Demaray concocted a lichen slurry consisting of lichen with natural protean substrate that was spread on various surfaces of buildings after gaining permission from the owners. It takes about three months for the lichen to propagate. If it doesn’t take, it simply dries up and blows away to find another place with more favorable conditions. A video of the plantings and walking tour are currently being produced featuring time-laps footage.

Demaray teaches at Rutgers-Camden. She is a recipient of the National Studio Award at the Museum of Modern Art, New York and is a New York State Foundation for the Arts Fellow in sculpture.

All photographs taken by Elizabeth Cheviot

ecoartspace has been a project of the Social and Environmental Entrepreneurs in
Los Angeles since 1999.
Go to EcoArtSpace