When Radical Nature opened, some critics bemoaned the fact that the exhibition was cloistered away from both the environment it discussed, and the audience that it deserved to reach. EXYZT’s wonderful Dalston Mill project was a clear answer to those critics

In New York, The Waterpod – pictured above – has been slowly circumnavigating Manhattan. Conceived by artists Mary Mattingly and Mira Hunter as a literal platform for art, it brings New Yorkers to the water that surrounds their island. Like Dalston Mill it provides not only a space for performaces, artworks and discussions, but it creates a triangulation between food, community and environment. This live-aboard ark grows at least some of its own food and includes its own henhouse.

For a taste of what it’s like to live and work aboard The Waterpod, try this NY Times article, which reveals that the floating pod was built from a variety of donated materials, including metal railings used in a Broadway production of Equus, and foliage print wallpaper recycled from the US soap As The World Turns.

It’s currently moored at Pier 5, Brooklyn Bridge Park but will be moving on to Staten Island after the 17th. Have any readers visited The Waterpod? Did it work?

Art in the 21st Century- Expanding the Artist’s Role 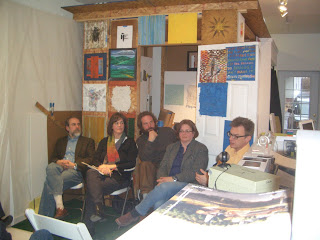 On Sunday February 22nd, Amy participated on a panel discussion, Art in the 21st Century- Expanding the Artist’s Role. The other panelists included Joseph Meisel from the Mellon Foundation; Beth Wilson, art critic and history professor at SUNY New Paltz and Brian Wallace, Curator at the Dorsky Museum. The panel was moderated by artist Simon Draper and held at Van Brunt Gallery, Beacon, NY in conjunction with the Habitat for Artists exhibition. The gallery was filled to capacity. One topic of discussion was the reaction to Holland Cotter’s NY Times article, “The Boom is Over. Long Live the Art” and the heated response elicited from it both positive and negative. Many artists argued that they already have “day jobs” – always have had them and didn’t like being told it was day job time again. Brian Wallace wondered why it falls to the artists to be the do-gooders in communities when hard times hit? Artist Susan Magnus spoke about the fact that many artists are involved in “real world” issues whether their work reflects those issues or not -that the idea of the isolated artist, alone working in the studio is no longer relevant. One positive suggestion was for artists and creative “think tanks” to emerge. Artist Karen Dolmanist spoke about her work reflecting her core values of sustainability and contemplation as opposed to market based values. Beth Wilson spoke about the possibility of heterotopias, as defined by Michel Foucault in a 1967 lecture.
In this lecture, Foucault sketches out a notion of how certain spaces exist for the negotiation of power relations, – places where for various reasons, individuals are set aside from the mainstream of everyday life. In the act of this setting aside, there is inscribed a “web of relations,” according to Foucault.

ecoartspace has been championing ideas related to the web of existence as per ecological systems, collaboration, collectivity and sharing for nine years now and they haven’t been as popular during the boom 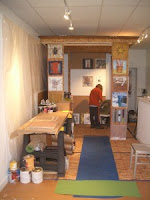 – maybe the recession will be a good time for us? Since ecoartspace is opening a new project room next week in NYC -we certainly hope so. The Habitat for Artists Collective project is an exciting beginning to this chapter.

HFA artist Chris Albert captured the event live and it can be watched on his blog, MAYKR.

Also catch Sharon Butler’s “share and share alike” on collaborative and community based art on the Art 21 blog.
Go to EcoArtSpace