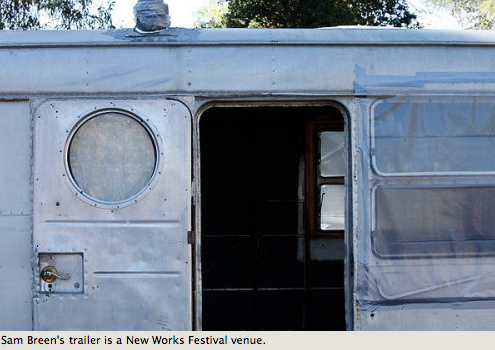 This week I will graduate with my MFA in acting, so we are turning the page on the last chapter of the trailer’s involvement at CalArts.

Every year, the Theatre School sets aside the last two weeks of the academic calendar for New Works Festival, an event by and for the students.  The trailer was chosen to be a venue for the event. Three shows were performed in and around the Spartan: “The Nomad Project”; a dance piece about the transformation of the dancer’s body;  “True Love,” a reading of Chuck Mee’s play that also involved a BBQ and water-gun fight; and “Outbound to Wonderland” a play written with the trailer in mind about a 9-yearl-old girl’s subway journey to a stop called Wonderland.

As with Arts in the One World in January, I was amazed at how people came together to make this event happen. When one of the artists was worried that her computer speakers wouldn’t be powerful enough to be heard, she made a phone call and an hour later she had a sound designer – a PA system and a couple of professional speakers on booms – in time for the performance of her show.

Another example: the cast and crew of “Outbound to Wonderland” decided it would be best to set up their outdoor stage in the middle of the night, when they could properly test their lights and visual effects, and still everyone involved in the production (actors, designers, crew etc.) showed up to help out.

New Works took care of much of the logistics and the scheduling at the trailer, so I was able to relax a little and be a spectator. I watched the shows and witnessed how, over the course of the semester, the trailer had become much more than an elaborate backdrop—it was now a central character. The Spartan had evolved into something of a mobile landmark at CalArts and a symbol for the creativity and unique collaborative nature of this school.