ashdenizen: at greenland, audiences get to have their say ahead of critics 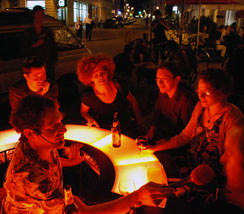 The National Theatre’s play about climate change, Greenland, had its first preview last night. The critics don’t get to see the play till 1st February, but audience members, leaving the show last night, had a chance to express their views almost immediately.

In the Lyttelton foyer, there’s a Talkaoke table, billed as a mobile talk show, where audience members take a seat, grab the microphone, and share their views on Greenland and climate change. (The pic shows a similar Talkaoke event at the Dana Centre.)

For those interested in other views still, a season of Greenland eventsincludes talks by the four Greenland playwrights, and four well-known voices on climate change, Bjorn Lomborg, Tim Flannery, Nigel Lawson and David King.

via ashdenizen: at greenland, audiences get to have their say ahead of critics.

A sensorial wearable device forcing to smell grass and to hear your own breath. Equipped with fresh sod and headphones, this mask inhibit the visual system while enhancing the olfactory by the proximity with soil.
The device defines also a sensory territory constructed by the rhytm of the breath, which is diffused from the headphones with a 1.5 sec. delay.

The work plays with the Deleuzian notion of “ritornell” (refrain), and about the quality of sound to define a territory. The space defined by the sound of breathing is in a state of costant imbalance between the physical act and its sensory perception and traces an unstable relationship with the intimate environment the garment reproduces.