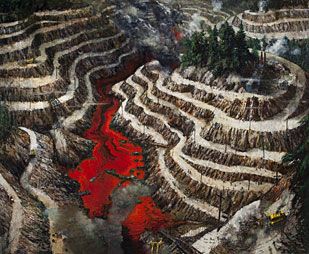 For Chester Arnold, painting is as much about social responsibility as it is about crafting luscious large-scale oil paintings in the tradition of 19th-century European artists. Since he began painting over three decades ago, Arnold has cleverly confronted a range of challenging subjects ranging from land use and environmental issues to the global impacts of human and industrial consumption, accumulation, and waste. The paintings united in this exhibition ask viewers to consider the implications of unchecked economic development and industrialized growth on the natural environment. Often, Arnold’s work is infused with a dose of religious or political inflection that generates passionate dialogue about the topics he tackles. “If this is God’s will,” Arnold once remarked while referring to one of the abused landscapes he depicted on canvas, “something is wrong.”

A special dialogue between San Francisco Chronicle Art Critic Kenneth Baker and Chester Arnold takes place Saturday, September 11 from 5:30 to 8 pm. Join Baker and Arnold as they discuss Arnold’s work on display in the Feature Gallery. A reception following dialogue is included in the ticket price.

A 78-page book, published in conjunction with the exhibition, will be available in the Museum Store featuring essays by Ann M. Wolfe, Curator of Exhibitions and Collections and Colin M. Robertson, Curator of Education.

Chester Arnold: On Earth as It Is in Heaven is presented as part of the Museum’s Art + Environment Series, which provides timely, engaging, and rewarding educational opportunities for artists, scholars, and communities to engage with ideas pertinent to the intersections of art and environments.

Media Sponsorship for Chester Arnold: On Earth as It Is in Heaven generously provided by edible Reno-TahoeMagazine.

via Nevada Museum of Art.