ashdenizen: at greenland, audiences get to have their say ahead of critics

The National Theatre’s play about climate change, Greenland, had its first preview last night. The critics don’t get to see the play till 1st February, but audience members, leaving the show last night, had a chance to express their views almost immediately.

In the Lyttelton foyer, there’s a Talkaoke table, billed as a mobile talk show, where audience members take a seat, grab the microphone, and share their views on Greenland and climate change. (The pic shows a similar Talkaoke event at the Dana Centre.)

For those interested in other views still, a season of Greenland eventsincludes talks by the four Greenland playwrights, and four well-known voices on climate change, Bjorn Lomborg, Tim Flannery, Nigel Lawson and David King.

via ashdenizen: at greenland, audiences get to have their say ahead of critics. 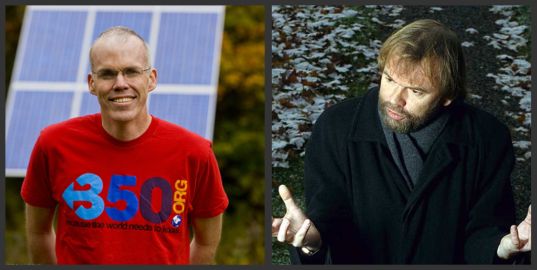 Any fellowship program that respects artists will not set out like missionaries to train them to be good citizens, which will do as much to reinforce the popular assumption that artists are irresponsible children as supporting facile aesthetic tantrums . . . The visual arts field should be seen as en ecosystem in which many different kinds of art must be able to flourish.

Last year at the UN talks in Copenhagen there was an awful lot of art. I mean a big glorious bucketful. I mean exhibitions and performances and people-hosting-people-as-art, and there was a great amount of debate as to how that was going to affect policy. If at all. In an interview with me for Inhabitat.com, Ian Garrett of the Center for Sustainable Practice in the Arts reported that in Copenhagen, “These creative ventures, in talking about climate change, are reinforcing what people are feeling around town here and they have an increasing voice with the policy makers of the world,” while admitting that the influence art had on policy was indirect at best.

So now what? Tonight, in New York, at the Metropolitan Museum of Art, there was a gathering of minds looking to answer exactly that question. Part of the PEN World Voices of International Literature, the even was called Weather Report: What Can We Do? and featured, among others, Bill McKibben, author of the 350.org campaign, Skeptical Environmentalist Bjorn Lomborg, Climatologist James Hansen and Dot Earthist Andrew Revkin.

Would love to read somebody’s lecture notes. In the meantime, I’ll be “doing” some blogging and art-ing.