This free eBook, edited by Päivi Simi and Outi Toumela, is the main publication of the long term project of the same title, taking place in Southern Finland and Estonia from 2009 to 2012.

The focus of the project lies in raising awareness and spreading knowledge on the use of healthier materials as well as on the environmental importance of using local materials.

What are natural materials? Basically, every material is originally natural. Even humans are composed of pure natural materials. We need better definitions like ecological materials, local materials, renewable resources, organic materials, and so on. We also need recyclability as well as a free flow of information. Everything we do or consume locally also affects globally. We must not forget that we have options.

This post comes to you from An Arts and Ecology Notebook 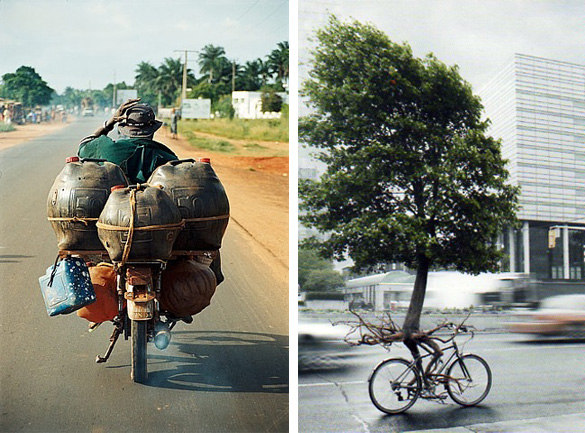 An exhibition that I stumbled upon accidentally a few months ago has stayed with me. On a visit to the Irish Museum of Modern in April 2011 I came across African artist Romuald Hazoume’s very thought provoking and surprisingly enjoyable installations of ‘masks’, sculptures, documentary film and photography work. 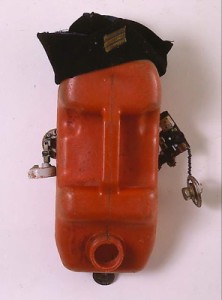 Romuald Hazoumè, one of Africa’s most important visual artists, creates playful sculptures and masks made from discarded plastic canisters commonly found in his native Benin (a small country neighbouring Nigeria)  for transporting black-market petrol (known as kpayo) from Nigeria. As can be seen in his image (above left) these jerry cans are expanded over flames to increase their fuel-carry capacity, sometimes to excess resulting in fatal explosions. Hazoume’s work richly references mask making culture from his African heritage to commenting on his country’s predicament of being caught up in the day-to-day and often unacknowledged misery of the global fossil fuel industry.  His work is engaging on very many levels and to a wide audience; from children who love the use of his found objects to adults that can see the political concerns in his work, to others who see a continuation of identity expressed in local materials made into masks.  ‘Hazoumé has used the cans as a potent metaphor for all forms of slavery, past and present, drawing parallels with the vessels’ role as crucial but faceless units within commercial systems, dangerously worked to breaking point before being discarded (Tate Modern, 2007)

From across this side of the planet my own work attempts to touch some of these concerns too. My long term project the hollywood diaries to transform our conifer plantation to a permanent forest has real long term energy returns as we are very shortly to discontinue use of oil for our home heating (a common and increasingly expensive form of domestic heating in Ireland) and use our never-ending supply of forest thinnings. In fact, I was startled to learn recently from my forestry contacts, that our ongoing selective harvesting to keep the forest vibrant and encourage the native tree seedlings to flourish, will mean that we’ll have 70 tonnes of wood every three to four years from our small two acres!! Crikey!

The image on the above right, Treebike, is a pointer to this month’s global day of cycling, Moving Planet lead by Bill McKibben and his global 350.org organisation to invite us all to get on our bikes this Sept 24th, 2011. I’ve always been amazed at the huge response to these events and how often the arts help mobilise such activities.

Here’s the video http://www.youtube.com/watch?v=_ztEgLXSiek – as in the past you can goto 350.org and join in the fun but its also a serious campaign too

‘Circle September 24 on your calendar–that’s the day for what we’re calling Moving Planet: a day to move beyond fossil fuels…

On 24 September we’ll be figuring out the most meaningful ways to make the climate message move, literally. We’ll show that we can use our hands, our feet, and our hearts to spur real change. In many places, people will ride bicycles, one of the few tools used by both affluent and poor people around the world. Other places people will be marching, dancing, running, or kayaking, or skateboarding. Imagine the spectacle: thousands of people encircling national capitals, state houses, city halls.

But we won’t just be cycling or marching–we’ll also be delivering a strong set of demands that can have real political impact.”

Note: some of you might be aware that I have returned to art college to undertake in-depth research on experimental film and ecology in the last year – if you want to follow along, my research site is www.ecoartfilm.com

I’ve recently created a small film sketch on how our small conifer plantation  is being transformed, comments welcome!!

An Arts & Ecology Notebook, by Cathy Fitzgerald, whose work exists as ongoing research and is continually inspired to create short films, photographic documentation, and writings. While she interacts with foresters, scientists, and communities, she aims to create a sense of a personal possibility, responsibility and engagement in her local environment that also connects to global environmental concerns.
Go to An Arts and Ecology Notebook

Tanna Center for The Arts by Vanuatu Pacifica Foundation — Kickstarter

Tanna Center for the Arts will be a 6-hectare/14.8-acre off-the-grid artists retreat, cultural preservation and technological education space. Its site is situated on the island of Tanna’s northern up country in the archipelago of Vanuatu.

Our vision is to build an eco-haven using a majority of local materials and talent, engineer it using energy efficient design fueled by renewables, and fortify global understanding of one another and the changes we face together by making art to share with the world in this inspiring place.

To preserve his culture, respected island leader Isso Kapum – son of Chief Jack Kapum of the Naihne Tribe – reached out to Paul D. Miller(aka DJ Spooky) to create opportunities for Tanna’s native population through an artist retreat. This can generate jobs, cultural exchange and, most importantly, training for youth who leave home in search of work. Training in sustainable construction, water & waste management, permaculture, and renewable technologies can offset this loss. These practices have been extinguished from the culture and are needed for the survival of Tanna’s eco-system, currently threatened by status quo, carbon-heavy practices.

Building skillsets for Tanna’s youth that drive a localized, sustainable economy along with international tourism remain key aims expressed by island leaders. Bringing artists who’s work and acclaim can magnify global awareness of both climate and cultural concerns faced by the Tannese is one way Paul feels such aims can be met.

The ecological impacts of unsustainable development have also brought near-shore overfishing, fish poisoning from waste disposal and deforestation in recent years. A lack of employment opportunities and inaccessibility to markets can lock rural families into subsistence mode, putting tremendous pressure on local ecosystems.
With an economy centered firmly on tourism, contributing 72 per cent of GDP, and agriculture, coconuts make up 31.1 per cent of exports, these losses devastate island society. The late 2005 relocation of an entire coastal village on Tegua Island in northern Vanuatu to higher ground rendered them among the first documented climate change refugees.

As islands lose revenue they also lose inhabitants, culture and languages, forever. According to Vanishing Voices: The Extinction of the World’s Languages, Vanuatu is considered to be the country with the highest density of languages per capita in the world, with an average of about 2,000 speakers for each of the 100 indigenous languages. Some of these languages are endangered, with only a handful of speakers, and several have become extinct in recent times.

Every two weeks a language disappears from Earth forever and with it a completely unique view of reality. This is a natural resource as valuable as fresh water and clean air. It must be preserved as carefully as we would an endangered plant or animal species.

The “Happiest People on Earth” Have Things to Teach

Amid such instability, the NEF Happy Planet Index found the Vanuatuans to be, not just happy, but the happiest people on planet earth in their inaugural research of 2006. The Tannese social bonds and ideas of interdependence are ones that the world needs now.

Our hope is that Tanna becomes a home for global sustainability that remains rooted in Melanesian society.

Anything you contribute will cover the construction of an initial ‘outpost’ on-site, a feasibility assessment and design of the first phase solar electricity systems for one village and three new structures between now and May 2011, when our first invited artists will arrive.

In December, local leadership, DJ Spooky, Engineers Without Borders and the Vanuatu Pacifica Foundation have arranged for R. David Gibbs, a New York-based solar and energy engineer with remote-location experience, to undertake a feasibility study with local renewables engineers, village electricians and tech trainees. The first goal is to replace diesel generators with solar PV and thermal systems that can power villages and initiate the design of the Tanna Center for the Arts’ off-the-grid retreat, cultural preservation and eco-education facility.

You’ve probably noticed we’re starting at $10,000 here on Kickstarter but with $20,000 we can complete the solar design phase, engage local craftspeople to build the initial structure(s) and create an ‘outpost’ that allows us to invite collaborators from around the island and the world to begin realizing this vision. Everybody’s help with a little or a lot is welcome, needed and much appreciated! .

(Please be in touch for specs if you can offer any material donations of PV panels, inverters, marine transport, etc.)

Our guides in this project are the people of Tanna and a board of advisers comprised of respected artists, businesspeople, scientists, tribal and global thought leaders. With time, we’ll increase local representation beyond the Naihne people to include broader representation from the archipelago.

By using our collective creativity and media savvy, we hope to create an exchange that empowers islanders to offer their unique cultural perspective as a main export and inspire visiting artists from around the world to impact their own cultures with the beauty emanating from this amazing place.

via Tanna Center for The Arts by Vanuatu Pacifica Foundation — Kickstarter. 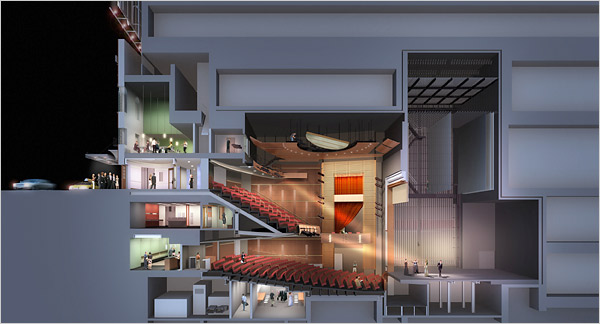 “Henry Miller’s Theater, the first newly built Broadway house in more than 20 years — and the first so-called green theater on the Great White Way — has completed major construction and is set to open in September with Roundabout Theater Company’s revival of the musical “Bye Bye Birdie.”

The 1,055-seat theater, on 43rd Street between Avenue of the Americas and Broadway, was built on the site of a theater planned by the actor Henry Miller, which opened in 1918. Over the decades, the original theater fell into disrepair and was used as a movie house and a disco before Roundabout produced the musical “Cabaret” there in 1998, followed by a run of “Urinetown.”