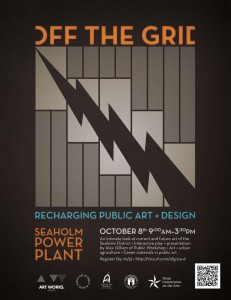 On October 8th Rebecca Ansert, Founder of Green Public Art Consultancy, was invited to speak at the City of Austin’s Art in Public Places (AIPP) Symposium , OFF THE GRID: Recharging Public Art + Design. AIPP staff, Carrie Brown and Susan Lambe planned an informative and thoughtful program. The day was filled with interactive building workshops lead by Alex Gilliam of Public Workshop, a panel discussion about the future of Austin’s Seaholm District including several public art opportunities, a conversation lead by Rebecca Ansert about sustainable materials in public art, and a panel of enthusiastic community gardeners (Randy Jewart, Austin Green Art; Jake Stewart, Sustainable Urban Agriculture, City of Austin; and Jessie Temple, Festival Beach Community Garden) who are making huge positive impacts in neglected areas of Austin. The following was my contribution to the conversation of sustainable materials in public art and connecting those materials to LEED points.

We don’t have time to do environmental at that’s not functional.

In working on a Climate Clock for the San Jose Initiative, designer Brent Bucknam would often get into theoretical debates about the nature of art. His project partner, Brian Howe of greenmeme, would quote Picasso: Art is the lie that reveals the truth. Brent’s response was the quote above.

It’s one of the central questions of the environmental art movement, and one that is integral to Brent’s work with Hyphae Design Laboratory, a company he founded.

How can art save the world?

Artists on greenmuseum.org and elsewhere  are blurring cultural boundaries between art and science, science and activism, volunteerism and performance. Traditional forms hold fast, but functionality remains central to Hyphae’s work. Function: defined by this designer as “interpreting and conveying ecological information or serving otherwise as an ecological tool or system.” Hyphae is currently working on a project in West Oakland, a plan to line the 580 highway on either side with towering stands of bamboo, natural air and particulate filters. On a greenmuseum.org-sponsored panel at the recent Earth Matters on Stage Symposium, he presented a number of other exciting projects, from green roofs to living walls.

The 28-year old designer went to a farming high school. He worked for bioremediation and green roof companies before joining Rana Creek, with which he worked on the California Academy of Sciences’ living roof. He became that company’s first Director of Design before moving on to create Hyphae.  He sees his new company as a catchall, providing services from ecological design and research to consulting for artists interested in environmental projects.

That last aspect is the result of Bucknum’s own experiences making environmental art: he’d like to see artwork that ’s better informed by ecology, not, as he puts it, the “horti-torture” that creates living systems barely able to survive the duration of an exhibition. He’d like the art to be the change it would like to see in the world: smart, sustainable, and thriving.