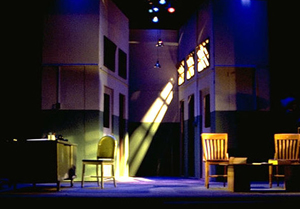 Yon Light is Not Daylight, I Know It: Findings from a Sustainability Study with Katie Oman at WSD2013

Stage lighting has been characterised as an intractable problem for sustainability in theatre. Attention has been focused on reducing loads by switching to other sources, even as many high-efficiency technologies remain prohibitively expensive. This has worried lighting designers who rely on tungsten in their work, fearing that addressing energy efficiency may affect the work on-stage.

Findings from the first season-long analysis of stage lighting energy use suggest that these fears are unfounded.

Check out this presentation by lighting designer James Bedell. He originally gave this presentation at an event for the Broadway Green Alliance exploring Greener Lighting Practices in the theater. As a sustainability advocate, James encourages lighting designers to integrate sustainability into their design priorities whenever working on a project.

Building on its success of the past 2 years, Arcola Theatre are once again providing low energy lighting and fuel cell power to the theatre stage; and this year we are providing sound as well.

In 2008 when the theatre tent was much smaller, we powered the whole lighting rig with a 5kW fuel cell, using low energy lighting fixtures including LED and low power tungsten lamps. In 2009 the tent grew to its present size, but, with a smaller stage and audience on fewer sides, we were just about able to power the rig on 5kW, with a little extra generator power for particularly bright scenes.

This year, with large stage, audiences on all sides and greatly increased technical expectations, lighting demands are significantly higher than in previous years. Luckily, great improvements in LED technology in the past 12 months mean that they can still play a role. We have thus switched our approach – instead of doing the best we can with 5kW, we are experimenting with the latest LED fixtures. With greatly improved light output and colour rendering there are LED fixtures emerging which can replace tungsten lamps even in mid-scale theatres. This lighting rig gives designers an opportunity to trial these technologies. 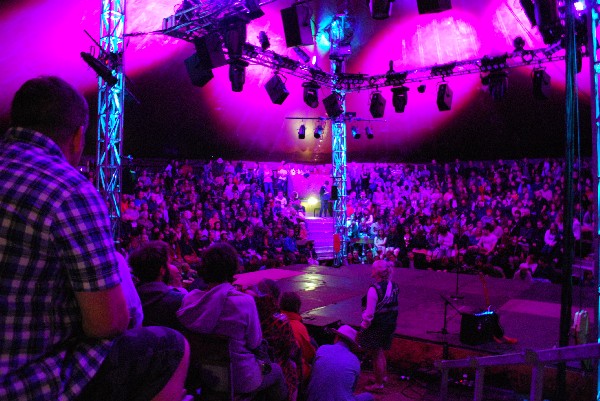 There has been much less popular attention given to low energy approaches to sound and thus we were keen this year to see what is possible. To ensure that there was no compromise in quality, we have enlisted the support of Steve Mayo, head of sound at the Barbican and a new industry partner Dobson Sound.

In these first trials our focus is on cutting energy consumption by two means – first by getting the right amount of sound in the right place, hence the skilled system designer, and second by improving system efficiency by using amplifiers employing pulse-width-modulation (D class) which use nearly 50% less power than a comparable solid state amplifier. We hope it goes well…

AROUND THE LATITUDE SITE

This year Arcola Theatre has launched a new strand of work developing low energy technologies for the live arts industry. Thus we have installed 7 of our new HyLight150 fuel cell powered lighting systems across the Latitude Festival site; providing lighting for everything from marquees, to forest performances to production areas, as well as powering laptops, phone chargers and ticket machines. 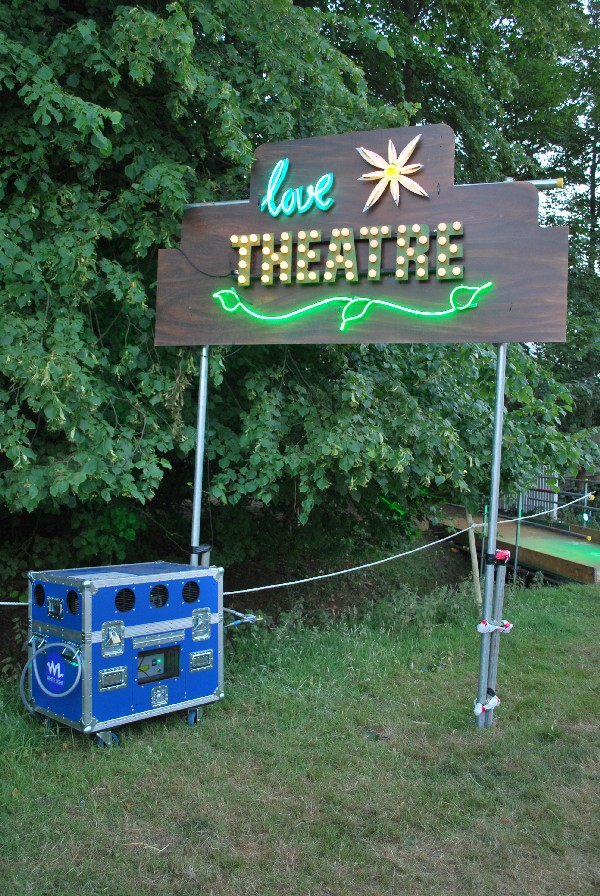 HyLight is the first fuel cell product to be developed specifically for the events industry and offers the high reliability demanded through an onboard ‘brain’ which monitors performance and seamlessly switches to battery back-up in
case of fault or user error.

Running on hydrogen, with a run time of over 50 hours between refills, the system produces zero emissions and is almost silent. Carbon emission reductions of up to 60% are likely in performance settings through use of the latest LED lighting. The system is also perfect for safety and security lighting where emission reductions of up to 90% are possible by displacing the ubiquitous 500W garage floodlight with 15W LED alternatives.

UK Gold Award: “And the winner is…”

The Arcola Theatre in Hackney, East London has become the first theatre in the UK to achieve a Gold Award from the Green Tourism Business Scheme.

Founded in 2000 the Arcola, in Arcola Street, London E8, is regarded as one of the leading arts venues in the UK. Now, it has become a leading light in the campaign to reduce London’s carbon emissions by 60 per cent before 2025 by investing in series of innovations and and an ongoing project to educate visitors on sustainability.

“We are trying to become the world’s first carbon neutral theatre.” said Dr Ben Todd, Executive Director with the Arcola Theatre in London.

“We are in a very old dilapidated building so we’ve done lots of work in house. That’s involved changing our suppliers, turning things off and putting in some fairly advanced technology for demonstrations.

“We are in fact the world’s first hydrogen fuel cell powered theatre and we’ve done some shows where we’ve run purely on hydrogen. Which in itself isn’t directly green but it helps to persuade lighting designers that they need to seriously cut the amount of lighting they use.

“We’ve managed to put on a theatre show here on five kilowatts which is about 70 per cent less than you would normally use,” said Dr Todd.

GTBS members are assessed on 145 separate measures by qualified advisers before being awarded a Bronze, Silver or Gold grading, making it one of the most scrupulous green accreditation schemes in the world.

To achieve a Gold grading from GTBS members have to demonstrate a number of practical measures which have improved energy savings and promoted sustainability.

“The Gold Award for the Arcola is a strong catalyst in greening North East London, including Hackney and surrounding districts,” said Jon Proctor, Technical Director of the GTBS.

“The most progressive areas for the business relate to how they communicate the green message to the community. The theatre hosts monthly green Sundays which are popular and very well designed.

“The Arcola staff have taken a lead on Green tourism in the area having been an excellent advocate of the scheme through presentations and demonstrations and they continue to drive sustainable development through a mix of highly innovative projects such as LED lighting and hydrogen fuel cells as well as simpler products such as a vegetarian restaurant.

“There are still areas for further improvement but the business has tackled all the issues which can be tackled directly and remains an inspiration to the community and the whole industry. As the first theatre in the UK to gain a Gold Award we hope further promotions will follow.”